Netflix’s ‘Bridgerton’ deserves all the praise 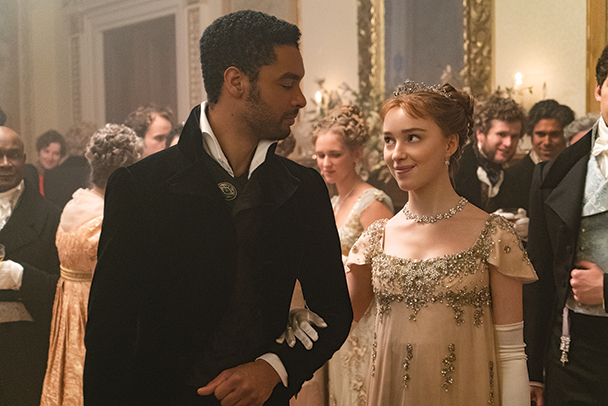 Regé-Jean Page and Phoebe Dynevor excel in their roles in “Bridgerton,” a Netflix series based on the Julia Quinn book series. (photo courtesy of Netflix)

Gossip, sexual tension and the next James Bond sizzle in Netflix’s answer to “Downton Abbey.” OK, fine. Breakout star Regé-Jean Page probably won’t become the next 007, but he’s got charm for days, and Regency-era “Bridgerton,” based on the Julia Quinn book series, provides the perfect outlet for him and a splendid cast to show off.

“Bridgerton” presents a counter-memory, to borrow a term from Michel Foucault, of high society in pre-Victorian England. Expect all the pomp and circumstance of such a period drama with one difference: elevated status of Black characters.

This allows Duke Simon Basset (Page) to easily rise above the competition amidst courting season when all the young ladies are formally presented to eligible suitors in hopes of landing a husband of social merit.

Daphne Bridgerton (Phoebe Dynevor) serves as the first daughter of her household in such a position, catching the eye of Queen Charlotte (Golda Rosheuvel) almost immediately. But elder brother Anthony (Jonathan Bailey) overplays his hand, deterring many interested young men from visiting Daphne.

Meanwhile, Simon cares not for the limelight, especially from possible spouses. He especially shares little in common with Daphne, other than a connection through Anthony, Simon’s oldest friend. Despite a shared disdain for each other, Simon and Daphne must work together.

The pair secretly plot to go through the motions of courting in order to make Daphne more desirable to other men. And in return, Simon, who rejects the “obligation” of such a union, can appease watchful eyes hoping he will soon settle down.

That’s all just the first episode. A host of other subplots grace the screen as well. Anthony’s own misadventures with love that prove racial integration doesn’t always mean classism also finds a remedy. Another young lady (dare we not say who) must quickly tie the knot, lest everyone learn of her unwed pregnancy.

And keeping things thematically on track, several other Bridgertons traverse the social landscape in search of purpose. Eloise (Claudia Jessie), a proto-suffragette if ever there was one, soon must follow in her older sister’s footsteps, though she would rather go to college and make a name for herself. Then there’s brothers Colin (Luke Newton) and Benedict (Luke Thompson), who texture the series, never serving more than roles that complement others’ stories. 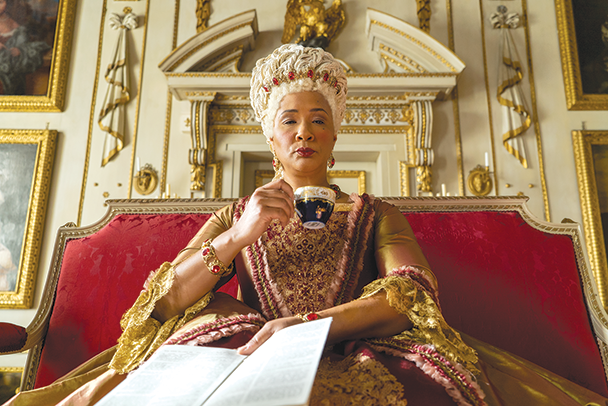 The driving story belongs to Daphne and Simon. Their loathing turned friendship (and possibly more) provides the delicious drama expected of such an undertaking. And setting the story in the 1810s permits familiar tropes a bit more leeway, like Simon the bad boy with sexual experience and Daphne the innocent daughter hellbent on fulfilling her central task.

That said, these two don’t reside in such positions for very long. That’s to be expected of any production by Shonda Rhimes (“Grey’s Anatomy,” “Scandal,” “How to Get Away with Murder”). “Bridgerton” marks the first of several projects Rhimes will pump out for the streaming service in the next few years.

“Bridgerton” might feel unlike other Rhimes projects as a Regency-era series, but it has all the scandal of everything else she signs off on. But as a period piece, what counts as salacious seems more mundane today. A premarital kiss must lead to marriage or a duel, only men know anything about sex ed and donning the same dress at a ball is unheard of.

To help us understand how improper all these things are for the time, thank Dame Julie Andrews, the series’ narrator voicing the anonymous gossip writer Lady Whistledown so knowledgeable of everything under the sun. The writer’s true identity remains a secret throughout the first season, but Andrews’ tone and the words themselves help initiate us all into another time two centuries ago.

Much like other Rhimes productions, the social commentary doesn’t arrive with a slew of PowerPoint notes on all the social woes women of the time must endure. Showrunner Chris Van Dusen, who worked on several previous Shondaland productions, also deserves some praise on that front as well. Race, class and gender issues are easily present, oft what drives dialogue and motivations between each line, occasionally bursting from a character’s lips with righteous anger. It all works, remarkably.

“Bridgerton” is a breezy binge-watch at eight episodes (though the finale is double the length), but more is already set to come. Alas, that news comes with an odd choice: greater focus on Anthony, perhaps the most annoying character in season one. Perhaps he’ll grow. Regardless, this one’s a massive hit sure to keep the lights on for several years to come. Pray the great Julie Andrews sticks around.