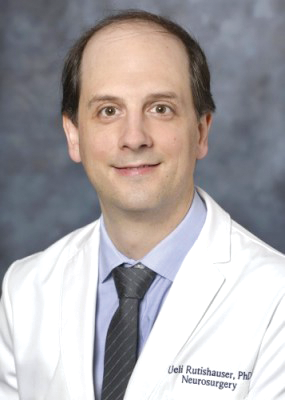 Ueli Rutishauser, professor of neurosurgery, neurology and biomedical sciences at Cedars-Sinai Medical Center, has dedicated his career to understanding how new memories are formed and stored in the brain. Rutishauser and his multidisciplinary team of scientists recently received a five-year, $8 million research grant to further their latest work involving the recording of patients’ single neurons.

The rapid formation of new memories and the recall of old memories to inform decisions is essential for human cognition. However, the underlying neural mechanisms and how they are disrupted by disease remain poorly understood, Rutishauser said.

“With this critical grant, we hope to gain a circuit-level understanding of human memory,” said Rutishauser, who also serves as the board of governors chair in neurosciences and interim director of the Center for Neural Science and Medicine at Cedars-Sinai. “With this knowledge, we hope to develop new treatments for the devastating effects of memory disorders.”

The multidisciplinary team led by Cedars-Sinai includes investigators from Boston Children’s Hospital, Harvard Medical School in Boston; Johns Hopkins University in Baltimore; the University Health Network in Toronto; the University of Colorado, Denver; the University of California, Santa Barbara; and the California Institute of Technology in Pasadena. Together, researchers will utilize neuronal recordings from individual cells in patients with epilepsy. The patients undergo a surgical procedure in which electrodes are implanted in their brains, and then undergo monitoring to localize their seizures.

The special electrodes also allow scientists to measure the activity of individual neurons. Patients perform a series of memory tests while the neuronal activity is simultaneously recorded, which allows scientists to correlate brain activity with behavior.

The research will investigate how neurons from distinct brain areas are activated to make memory-based decisions, how the beginning and end of an event are detected, and how the firing patterns of these nerve cells work to initiate the formation of a new memory. The project will also investigate how electrical stimulation of the same brain areas can be used to improve memory.

Scientists expect the research to reveal unprecedented detail of how memories are formed, retrieved and used for decisions.

“This work is unusually innovative because we record single-neuron firings in multiple areas in humans while they are performing memory tasks,” said Adam Mamelak, professor of Neurosurgery at Cedars-Sinai and co-principal investigator of the grant. “In conjunction with these efforts, we will also develop new methods for noninvasive localization of implanted electrodes and electrical stimulation.”

The award is funded through the Brain Research Through Advancing Innovative Neurotechnologies Initiative, also known as BRAIN, which was created to revolutionize understanding of the human brain. Announced by then-President Barack Obama in 2013, the BRAIN initiative is meant to fill gaps in knowledge and provide unprecedented opportunities for exploring how the brain enables the human body to record, process, utilize, store and retrieve vast quantities of information. Through the initiative, data is pooled from identical experiments across all study sites, which expedites the rate of scientific discovery and medical advances.