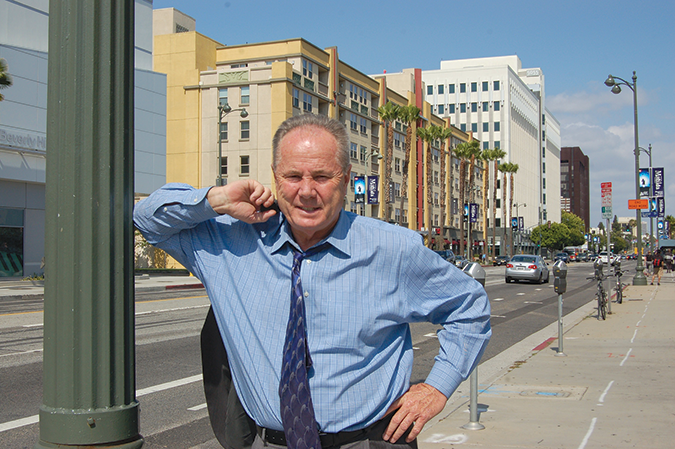 Tributes continue for former Los Angeles City Councilman Tom LaBonge, who died on Jan. 7 at the age of 67 at his home in Silver Lake.

To many, he was “Mr. Los Angeles,” a consummate public servant for 39 years with a larger-than-life presence, affable personality and the uncanny ability to remember everybody’s name. LaBonge left an indelible impression and a lasting legacy in the city he loved, colleagues and constituents said. He also loved its residents, frequently calling them an “angel in the City of Angels.”

Los Angeles Mayor Eric Garcetti offered condolences on social media shortly after receiving news of LaBonge’s death. The two represented Hollywood for most of the 2000s and the early part of the last decade as Los Angeles city councilmen, Garcetti representing the 13th District.

“For over a decade, Tom LaBonge and I worked together, as colleagues and neighboring council members. We often said that while we shared a border, there was no dividing line between us, our work and our districts,” Garcetti said in a tweet. “From the revitalization of Hollywood to the preservation of Silver Lake, there was no better friend or partner I ever had. No one knew more Angelenos, no person gave more waking hours to our city, no one was a greater cheerleader for our town than Tom.”

LaBonge was a native Angeleno and a graduate of John Marshall High School. He served on former Mayor Tom Bradley’s youth council and later held positions with Councilwoman Peggy Stevenson and the Los Angeles Department of Water and Power before joining the staff of former Los Angeles City Council President John Ferraro in 1978.

LaBonge became Ferraro’s protégé and succeeded the venerable city leader in representing the 4th District after his death in 2001. A member of the Los Angeles City Council from 2001-15, LaBonge was hyper-focused on constituent needs. He rolled up his sleeves and got his hands dirty, often personally responding when complaints were lodged. He cleaned up illegal dumpsites and made sure potentially dangerous potholes or broken sidewalks were fixed. When a brush fire blackened more than 800 acres of his beloved Griffith Park in 2007, LaBonge joined firefighters on the front lines near the Greek Theatre and afterwards, planted some of the first saplings to aid in recovery. Many cited his deep connections to the city and referred to him as an ambassador, making an impact far beyond Los Angeles’ borders.

“Tom loved L.A. and he always put his constituency first. I found him to be the real deal. What you saw was what you got with Tom,” former Los Angeles City Councilman and County Supervisor Zev Yaroslavsky said. “He loved L.A., and he promoted Los Angeles internationally. He was very active in the Los Angeles Sisters Cities program. I traveled with him and John Ferraro back in 1990 to Berlin, which is our sister city, and he knew more people in Berlin City Hall than I knew in L.A. City Hall. He had a great personality, a larger-than-life personality, and it was never about him. It was driven by a true love for Los Angeles.”

Council colleagues also spoke highly of LaBonge and his service to the city. Councilman Mitch O’Farrell, 13th District, offered condolences for LaBonge and his family. LaBonge was married to his wife Brigid since 1988 and had two children, Charles and Mary Cate. O’Farrell and LaBonge served together for two years before LaBonge left the council in 2015 due to term limits.

“No one loved Los Angeles more than Tom LaBonge and we loved him back. No one knew more about the workings and history of our city, its people and its institutions.” O’Farrell said. “We lost a force of nature and goodness. Tom was the ultimate ambassador for Los Angeles where he brought into sharp focus his zest for life, his tireless pursuit of service and his firm belief that anything was possible. Our city was what he dedicated his life to and for that I will be eternally grateful. Thank you Brigid, Charles and Mary Cate for sharing him with us all these years.”

“My dear friend Tom LaBonge was not only a council member, he was the ultimate goodwill ambassador and informal Los Angeles historian. A ball of energy, he was a super-nice guy who would give walking tours of historic City Hall to random visitors he would meet,” Koretz said. “He paid attention to great detail and remembered every council member’s high school, including their mascot. He was the role model for how to provide amazing constituent services. He loved everything Los Angeles, from Griffith Park to historic eateries and hangouts such as Pink’s and Musso and Frank, but more than that, [he] was a man who recognized every human being and exuberantly loved people, making them feel appreciated. I can’t imagine the city of Los Angeles without him. My staff and I are so deeply sorry and send condolences to his family, Brigid, Charles and Mary Cate, friends and the entire city of Los Angeles.”

“The 10 years we spent together on the City Council were the best political years of my life. We sat next to each other in the council chambers and Tom just had a way of making everything fun. He was so excited to show up to work every day and his enthusiasm was contagious,” Hahn said. “Everyone has a story about Tom LaBonge and together, they paint a picture of a man who was on a mission to get everyone to love Los Angeles just as much as he did. He was known for hiking Griffith Park every morning and escorting people he met to the Hollywood sign. I remember him jumping aboard tour buses and taking over for the tour guides. I will always remember his heart and his decency. Every year, he and his wife Brigid hosted Thanksgiving for the entire Los Angeles consular corps because he knew so many of them had nowhere to spend the holiday. His idea of being a city council member was driving around in a truck personally picking up bulky items for his constituents. My mother always said he reminded her of my dad, Kenny Hahn. Nobody loved this city more than Tom LaBonge and I don’t know if anyone ever will. He was and will always be ‘Mr. Los Angeles.’”

Los Angeles City Attorney Mike Feuer cited LaBonge’s love for Griffith Park and proposed the idea of paying tribute to him there.

“The city should name one of Griffith Park’s iconic locations for Tom LaBonge, who loved the park and the people who cherish it,” Feuer said in a tweet.

“Councilmember Tom LaBonge was a true son of Los Angeles. A native Angeleno with a deep and abiding love for his city, he served L.A. faithfully and tirelessly for 39 years in various capacities at City Hall, culminating in his 15 years as a city council member serving District Four,” Raman said. “Every single one of my neighbors in Silver Lake has a story about how Tom personally resolved an issue they were facing in their community. That’s the kind of person he was. He would drive the district regularly, talk to his constituents and whenever possible, attempt to solve their problems personally and on the spot. The example he set in running his office leading with his sincere love for the city and his love for Angelenos is one I’ve taken to heart and one that my office hopes to emulate as we move forward.”

Constituent Julie Stromberg, a member of the Greater Wilshire Neighborhood Council, shared a unique perspective about LaBonge. They first met when she was advocating for renovations at Harold A. Henry Park on Beverly Boulevard. He encouraged her to get more involved in civic affairs.

“One of the things I loved about Tom, and something I think he doesn’t get recognized for, is Tom was a feminist,” Stromberg said. “He supported women being involved in politics. He encouraged people like myself who were interested in running for office or getting involved. That’s not something you see a lot, and Tom was always supportive of that.”

Others remembered LaBonge for his generosity and a genuine care for others. He frequently visited the local community’s many iconic locations, including the Original Farmers Market, corner of Third and Fairfax.

“Tom not only loved the market, but had a deep reverence and appreciation for its history and the small business owners that make Third and Fairfax hum. It was a common occurrence to not only see him at our events like the car show and Taste of Farmers Market, but to also see him regularly on the east patio enjoying a plate of Bryan’s Barbecue while chatting with fellow customers and market employees,” read a statement from the A.F. Gilmore Co., owner of the Original Farmers Market. “He truly was Los Angeles’ greatest cheerleader and friend, and will be missed.”

Richard Pink, owner of Pink’s Hot Dogs on La Brea Avenue, said LaBonge stopped by the stand last Sunday, shortly before it closed temporarily during the pandemic. He said LaBonge brought three-dozen roses for the staff and promised to take them on a special trip to the Hollywood sign once the pandemic is over. Pink plans to name a hot dog in tribute to LaBonge.

“The Pink family and our staff truly loved Tom LaBonge,” he said. “The term ‘Mr. Los Angeles’ truly fit, with his energy, his enthusiasm and his love of this great city. There was not a greater cheerleader for the city of Los Angeles than Tom LaBonge.”