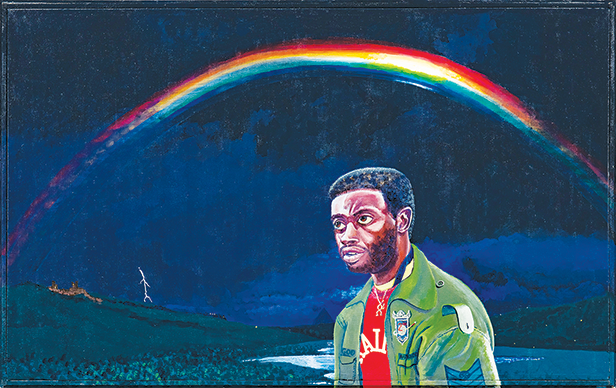 Jim Adams’ “Look Upon the Rainbow” is an acrylic on canvas painting created in 2000. (image courtesy of Luis De Jesus Los Angeles)

Luis De Jesus Los Angeles announced that “Jim Adams: Eternal Witness,” will be on view from Jan. 9 through Feb. 27.

“Eternal Witness” marks Adams’ first solo exhibition with the gallery. The exhibition will present new paintings and sketches completed over the last four years along with a selection of works dating to the turn of the millennium.

The works in “Eternal Witness” draw primarily from “Mythic Sketches,” a body of work Adams has pursued consistently over the past three decades. They manifest mostly as studies of pyramids or portraits of deities. Adams noted that he portrays these figures in the garb of contemporary fashion in much the same way that historical painters portrayed mythical figures in the fashion of their own time.

“For centuries, artists have used myths, both classic and obscure, to depict issues and conflicts that are as significant today as they were in earlier times,” Adams said. “Jealousy, ambition, hubris, greed and the glorification of warfare are essentially the same as they were in the age of the classic Greeks or the Kingdom of Great Zimbabwe. The only things that have changed are the clothes and the technology we use.”

Examined through his lifelong interest in cultural meta-narratives, especially those drawn from Egyptian and Classical mythologies, Adams use of iconography acknowledges the long history of artistic representation associated with his mythic subjects.

“It is the paradox of the pyramid which underlies the art of Jim Adams. An ‘eternal symbol,’ it is always more than what it seems. Its cache extends beyond its own history. Likewise, Adams’ myths always extend beyond their own precepts; they are never fixed, never singular, never the monoliths they may appear to be,” Canadian curator Rhys Edwards wrote in his essay for the exhibition.