Eighteen good, bad and bizarre moments across media in 2020 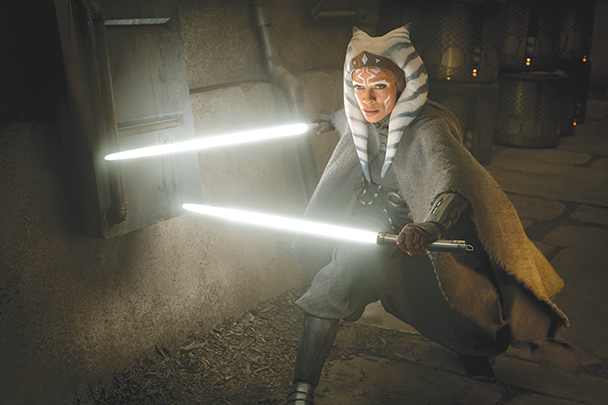 Ahsoka Tano’s breakout in the “Star Wars” saga was a highlight in 2020. (photo courtesy of Disney)

Ever wish for a season when the sitting president’s name wouldn’t dominate the headlines? Last year, that wish came true with a price: murder hornets, civil rights protests and of course, pandemic news.

Popular media found itself in a similar situation, adapting to evolving circumstances. The year provided a sea of highs and some wretched lows. To commemorate a batty year, I give you 18 of the best, worst and strangest media moments of 2020, from news stories to television series to viral content.

Following President-elect Joe Biden’s win, news media paid more attention to his family, including his rescue dog, son Hunter and especially future First Lady Dr. Jill Biden. Most might applaud her advocacy for community colleges, but one Wall Street Journal columnist (no need to say his name here) took issue with her use of the term “doctor” (he even called her “kiddo”).

Apparently, only medical doctors can use “Dr.” in front of their names. Dr. Biden “just” earned a doctorate in education. Other talking heads across expected media locales agreed, proving their limited exposure to the term “doctor” – from the Latin for “teacher” – and upset the many, many Ph.D.s and Ed.D.s who take pride in their accomplishments.

The gods bless John Krasinski. The early days were rough, but “Some Good News” pumped out a few episodes of needed optimism. Sure, the growing indifference toward quarantining told a very different story, but for a few weeks, a solidarity high ruled the day.

The showdown between Vice President-elect Kamala Harris and outgoing Vice President Mike Pence wasn’t the poo-poo platter established by the outgoing president and a Fox commentator oft ignored. But the VP debate did gift social media one splendid moment: a fly that took residence on Pence’s head for two minutes and three seconds. The viral reaction proved the internet isn’t also a cesspool.

The once beloved “Harry Potter” creator downgraded from YA fiction to social media rants and eventually a BBC op-ed defending her belief in binary sex, claiming blurred lines between male and female would lead to more sexual assaults in women’s bathrooms.

Unlike the preparation for composing her acclaimed book series, J.K. Rowling replaced thoughtful research with sweeping generalizations and all the tropes that often accompany ignorant, transphobic hot takes.

The hardest part about watching TV series and films produced pre-pandemic has been trying to understand how no one wears a mask or stands 6 feet apart. Only one option remained: nostalgia. The long list of reunions – from “Reunited Apart” to the “Parks and Recreation” COVID-19 special – provided the needed reminder of a time when things were … OK, not always better, but at least maskless and more physically intimate.

As we all knew, the election results wouldn’t be clear on Nov. 3. So when a more accurate tally of results began to unfold days later, film editor John Handem Piette memorialized the moment by splicing President-elect Biden and a host of others into the penultimate sequence from “Avengers: Endgame.” A weird mix of original content and stock photos of Barack Obama, Harris, AOC and even Sean Connery replace the faces of the A-list cast.

Will AMC and the others open or not? The answer to that question went into limbo nationwide for a while. Perhaps the most shocking moment arrived when AMC head Adam Aron decreed masks “optional” in June, deeming them “political,” as if a virus cares. Add to that AMC’s lame-duck “ban” on Universal films when the studio mentioned plans to release movies in theaters and digitally. Good grief.

In 1968, “2001: A Space Odyssey” depicted a black monolith arriving on Earth like a celestial presence recording the planet and its habitants’ most momentous turning points. In November 2020, a chrome iteration appeared in the Utah desert and then vanished shortly after. Three more would appear, one in Romania. Crazy performance art project, probably. E.T. warning Karens and Chads to take the pandemic seriously, just as likely.

Media production during quarantine is a mixed bag, but Selena Gomez’s HBO Max series “Selena + Chef” works far better than most. Gomez is delightful, the recipes rock and the premise outshines the average cooking show, pandemic or not.

So Cardi B premiered a single and music video for “WAP,” addressing some rather adult content. The most hilarious criticism hailed from eternal man-child Ben Shapiro.

“Guys, this is what feminists fought for,” the women’s issues expert said on his radio show. “This is what the feminist movement is all about. It’s not really about women being treated as independent, full-rounded human beings.”

But things got worse. Instead of just not listening to the song, he desperately tried to defend his position, resulting in some embarrassing self-owns.

It’s good the film mogul was convicted. It’s bad this ever happened. It’s bizarre (and bad) anyone ever questioned the goals of the #MeToo movement.

Bypass the long binge experience with some quality limited series. “The Queen’s Gambit” rightfully earned all the praise. An amazing lead performance by Anya Taylor-Joy and crisp writing that pays off in the seventh episode. But FX’s lesser-known “Devs” deserves praise for brilliantly exploring sci-fi topics like parallel dimensions and how algorithms accurately (or not) predict our behavior.

When “Jeopardy!” host Alex Trebek announced he had pancreatic cancer, loyal viewers knew to prepare for the worst. Still, his death in 2020 adds to the year’s dumpster fire, while it also marks the end of a golden era of classic TV programming. His charm and beautiful heart won’t be replaced, ever.

The story of Joe Exotic abusing tigers and attempting to assassinate a big-cat nemesis became the first major hit of 2020, arriving just after most states received standing orders to stay home. It was trash, but the timing aided spectators desperate for something to watch.

Before socializing went on pause, stars converged to commemorate the best films of 2019. At the time, the hot topic was a second hostless event. Then the South Korean flick “Parasite” went home with four awards, including best picture. For the first time in Academy history, a foreign-language film won big. Such a moment should’ve occurred earlier (i.e., “Pan’s Labyrinth”), but it set a more hopeful tone before things turned dire.

This one hurt. A young talent breathing life into each memorable role. Chadwick Boseman played several historical figures (Jackie Robinson, James Brown, Thurgood Marshall), but his most popular role across four films as Black Panther is remarkable, so much so that Marvel Studios won’t recast him. That says a lot.

A year ago this March, several celebs, at the bequest of Wonder Woman actress Gal Gadot, sang John Lennon’s “Imagine,” tag-teaming each line. Kristin Wig, Henry Cavill, Natalie Portman, Jamie Dornan and a host of others joined together to sing about solidarity. It was wildly painful, brazenly condescending.

Not once but twice, the best “Star Wars” character Ahsoka Tano – the former protégé of Anakin Skywalker – stole the show, first in the final four episodes of “The Clone Wars” season seven and then in season two of “The Mandalorian” for a glorious episode, Rosario Dawson bringing the digital character to live action. Both are available on Disney+ to watch over and over again.