CTG launches ‘Not a Moment, but a Movement’ 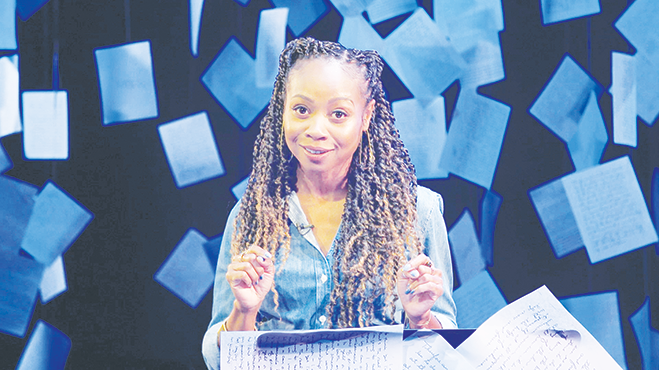 “Crowndation; I Will Not Lie to David,” starring Sheria Irving, was performed at the Kirk Douglas Theatre and is being presented as part of the first episode of “Not a Moment, but a Movement.” (photo courtesy of Center Theatre Group)

Starting today, Jan. 21, Center Theatre Group will launch “Not a Moment, but a Movement,” a series of events that amplify and center Black artists. The first episode, premiering on demand beginning tonight at 5 p.m. and available through March 22, will be introduced by Vanessa Williams, hosted by Bruce A. Lemon Jr. and will feature a reading of Angelica Chéri’s one-person play “Crowndation; I Will Not Lie to David.” The play will be paired with the music of Jessica Lá Rel and the work of visual artist Kenyatta A.C. Hinkle.

The video will be free to CTG subscribers and supporters and $10 for all others.

Directed by Cezar Williams and performed by Sheria Irving, “Crowndation” is a one-woman show following 29-year-old Fatima Seed. Now the same age as her mother when she died of breast cancer, Fatima battles her inner-contradictions, yanked in multiple directions by her faith, her sexuality, her purpose and a secret she discovers about her father, all in pursuit of becoming whole before her time runs out.

Presented in conjunction with Watts Village Theater Company and the Fire This Time Festival, “Not a Moment, but a Movement” events feature a host who guides the audience through the work of a visual artist, a musician and a theatre artist. Each event is paired with a panel discussion to create a uniquely comprehensive cultural experience.

“I am excited to be partnering with the Fire This Time Festival and Watts Village Theater Company to create and curate this series that amplifies, centers and celebrates Black voices,” CTG Associate Artistic Director Tyrone Davis said. “There is so much insightful, inspiring and illuminating work for us to choose from that it would be impossible to fully represent the breadth of Black artists but I feel that these three women, expressing and exploring their own unique voices and experiences, offer an excellent start to the countless conversations that our theatre and our community needs to have.”

Chéri is one of six playwrights selected for the inaugural Writers’ Room at the Geffen Playhouse in Los Angeles.