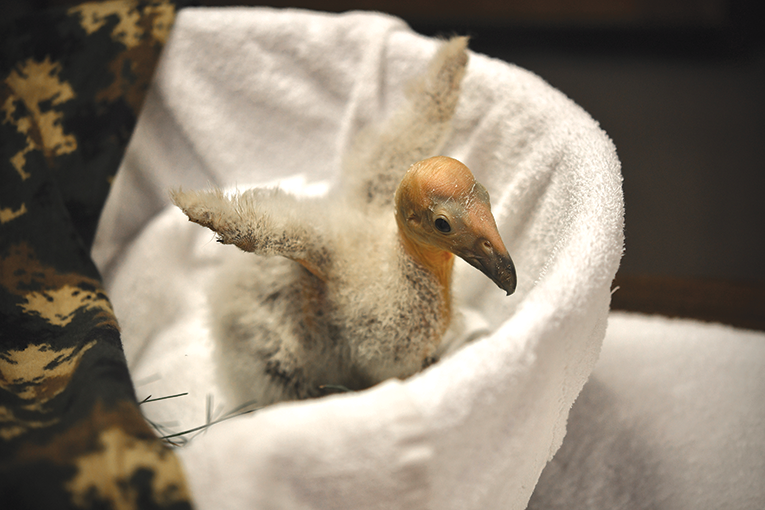 The new condor chick will be named Cali or Cal, depending on its gender. (photo by LouAnne Brickhouse/GLAZA)

The Greater Los Angeles Zoo Association, the nonprofit that provides financial and marketing support to the Los Angeles Zoo, has raised $31,076 for the California Condor Recovery Program, surpassing its goal of $25,000.

The money was raised through its crowd-funded condor-naming campaign for a hatchling formally known only by its identification number, LA1720. Donors could choose between different names for the new chick. The winning name was Cali or Cal, as the gender of the chick has yet to be determined.

“We are thrilled by the outpouring of support that stretched from coast to coast,” GLAZA President Tom Jacobson said. “The money raised will help support the reintroduction of the California condor to its ancestral skies, and the enthusiasm we have witnessed through small donor-funded campaigns like this tells us that, even during times of tremendous uncertainty, conservation of wildlife is still a high priority.”

Funds raised will support the zoo’s programs for breeding, as well as preparing condors for release into the wild, providing medical treatment for sick and injured birds, monitoring and interventions in the field, and training and mentoring staff from partner agencies and institutions. The chick will stay at the zoo until reaching maturity, at which time it will be placed where it is determined it can best contribute to the genetic diversity of the species. Since reaching a population low of 22 individual condors throughout the world in the 1980s, the Los Angeles Zoo has assisted in rebuilding the population, which now numbers over 520. More than half of those birds live in the wild.

The new chick’s tenuous tale of survival was documented by the L.A. Zoo’s Conservation Ambassador LouAnne Brickhouse through photographs and video on social media. Prior to hatching, the chick experienced serious health challenges, including being mispositioned inside the shell, a condition which normally could have resulted in death. Through medical intervention and the care from the zoo’s condor keeper team, the chick survived and is thriving.

“This is the first time the L.A. Zoo has allowed real-time behind-the-scenes access and documentation of the condor team’s vital work, and we see it galvanized legions of fans and followers to contribute to the naming of this hatchling,” CEO and Zoo Director Denise Verret said. “It’s inspiring to see their hard work come from behind closed doors to public view so our supporters better understand the delicate, and often harrowing, work that goes into conservation and captive breeding.” For information, visit lazoo.org.