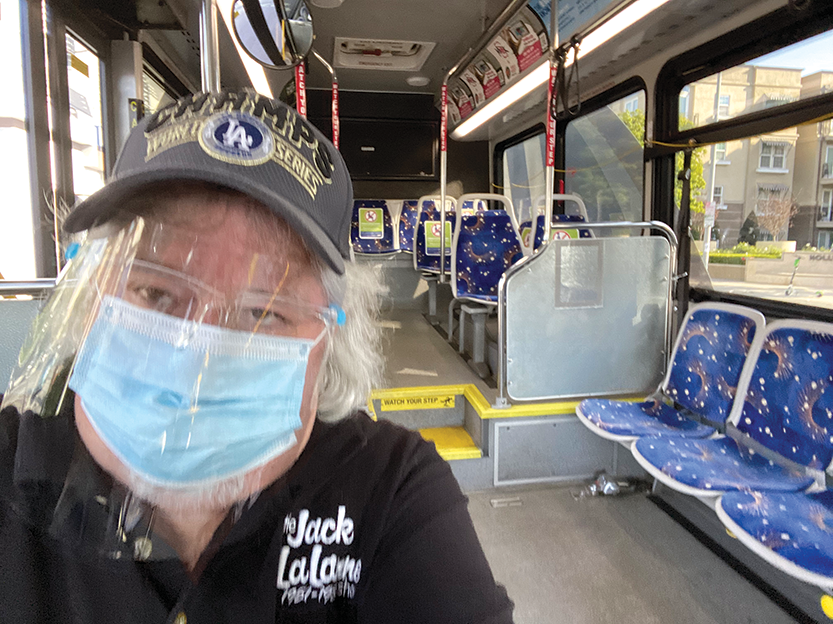 Todd Hoffman, a frequent bus rider, claims not enough is being done to enforce mask-wearing on public transportation. (photo by Todd Hoffman)

More than nine months after its introduction, the Los Angeles City Council approved a motion on Jan. 13 putting teeth into requirements that masks be worn in public while COVID-19 public health orders are in place.

The motion, first introduced on April 7 by Councilman Paul Koretz, 5th District, authorizes multiple city departments to issue administrative citations to people failing to wear masks. Until last week, people were required to wear masks in public under Mayor Eric Garcetti’s Safer at Home orders, but there were few legal ramifications if they did not comply. The Los Angeles Police Department was authorized to enforce rules in the most egregious cases, such as when someone becomes threatening or violent when told to wear a mask, but otherwise was not tasked with general enforcement of mask wearing.

Following the City Council’s approval, the LAPD, Department of Recreation and Parks, Department of Building and Safety, Department of Animal Services and Bureau of Street Services can issue citations, which carry a $250 fine for a first offense and will be enforced by the Los Angeles City Attorney’s Office. Koretz believes the current surge in cases of COVID-19 is linked to noncompliance of the city’s mask mandate, and he hopes citations will prompt people to take the requirement seriously.

“We know that the best prevention is strict compliance with health guidelines, which include avoiding crowds, social distancing, wearing face coverings whenever one is in the company of anyone outside their household and sanitizing or washing hands regularly,” Koretz said. “Unfortunately, too many individuals willfully continue to refuse to wear masks, thereby perpetuating the growing spread of COVID-19.”

The new approach will be part of the city’s Administrative Citation Enforcement program, known as ACE, which was established in 2013. The citations do not affect a recipient’s criminal record and can be appealed through the City Attorney’s Office. In the past, the city departments have issued administrative citations for other offenses such as drinking in public, illegal fireworks, loud parties, illegal use of park space, having a dog off leash and numerous other low-level offenses.

According to a report on the ACE program from the City Attorney’s Office, 52,000 citations have been issued since 2013. During the fiscal year 2019-20, the city of Los Angeles collected more than $1.2 million in fines from ACE citations, while $1.4 million remains unpaid. Citations that are not paid are referred to the state Franchise Tax Board for collection.

Koretz’s deputy Alison Simard said the new citations for not wearing masks provide an extra level of safety for everyone. She said the mask mandate applies to all public locations.

“People can now expect to receive a ticket if they are out in public without a mask,” Simard said.

Koretz is also taking aim at mask noncompliance on public transit, where he said there is a high potential for the spread of COVID-19. On Tuesday, the Los Angeles City Council’s Transportation Committee considered a motion by Koretz on better ways to enforce mask wearing on city buses and other public transportation. A report is due in 30 days.

“COVID-19 has had a major impact on transit workers. These are the frontline workers that have kept Los Angeles running, and it is incumbent upon us to keep them safe by all means necessary,” Koretz said. “I have been especially concerned about the spread among transit riders, which is why I introduced a motion instructing the Department of Transportation to report back on the percentage of DASH operators and staff impacted by COVID-19, any ongoing or forecasted disruptions to service, measures to reduce virus transmission and mitigate service disruptions as well as best practices at other transportation agencies such as additional safeguards, protocols, technologies and enforcement mechanisms that could be employed to ensure riders are commuting safely.” 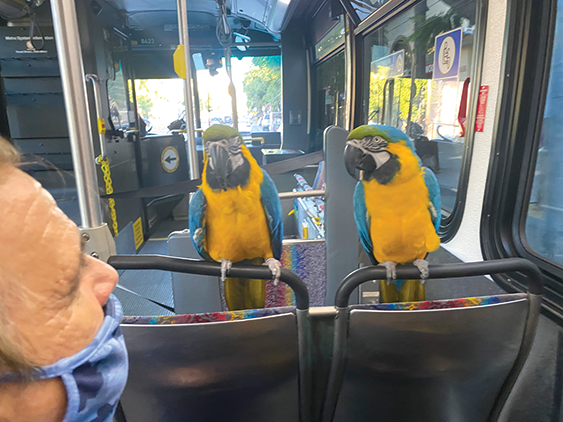 Todd Hoffman said he has run into many people who do not properly wear their masks on the bus. (photo by Todd Hoffman)

Todd Hoffman, a Beachwood Canyon resident who takes up to eight different buses weekly from the Hollywood area to Studio City, said riding public transportation can be a scary experience. Hoffman said he frequently sees people enter buses without masks or take them off inside. Some wear them down around their chin or below their noses, Hoffman added. Bus operators sometimes inform people that they are required to wear masks, but often do nothing, he said.

“I have to tell you, it’s bad. Nobody enforces the rules. I’ve had a homeless guy assault me, no mask on. I’ve had people sitting behind me breathing down my neck. I’ve almost gotten into fistfights on the buses. If you tell somebody to put their mask on, you don’t know what’s going to happen,” Hoffman said. “You get on and the windows are always closed. I open the windows and people get mad because they say it’s cold. You’re supposed to sit every other seat but they are only 18 inches apart. You’re basically in a tube full of people rolling down the street. These are your superspreaders. I challenge the mayor or any of these public officials to ride the bus and see what’s going on. They won’t ever do it.”

Koretz said while the City Council has authority to enact changes to LADOT public transportation, the Los Angeles County Metropolitan Transportation Authority is an autonomous regional entity and operates under a different system. Koretz hopes Metro, which requires masks to be worn on its buses and trains, will consider following suit in considering more enforcement mechanisms. Metro spokesman Dave Sotero said there is a high level of compliance on buses and trains.

“Our enforcement is done through education of transit riders. We display information about our mask requirement at our stations and our bus head signs also say that masks are required before boarding,” Sotero said. “We are observing 99% compliance with our face mask requirement. We have cameras on most of our transit vehicles to verify mask compliance.”

Hoffman disagreed with that assessment, and said he has had a much different experience on both city and Metro buses. He wonders if anything will ever be done to ensure masks are worn.

“No one is doing anything as far as implementing the mask law. I am ashamed of Los Angeles,” he added. “We lead the nation in cases, we lead the nation in deaths. People are dying, and they are going to start this now? This has been going on for almost a year.”