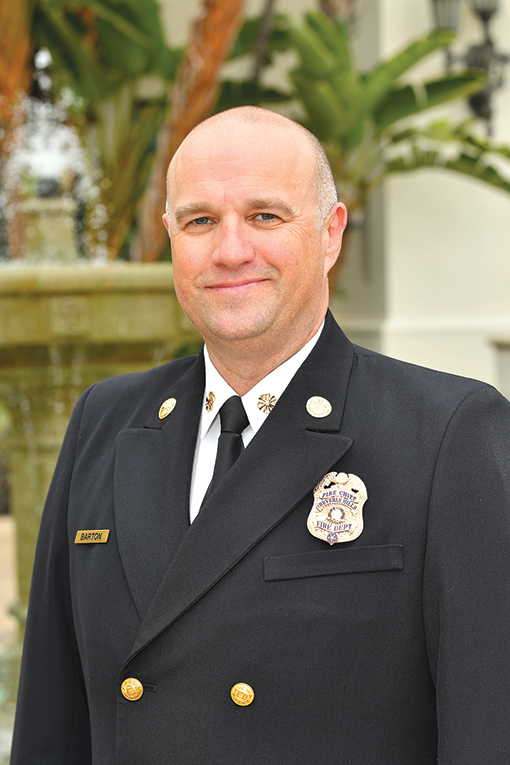 BHFD Chief Greg Barton has served the city with distinction for 25 years. (photo courtesy of the city of Beverly Hills)

The award, presented to Barton on Jan. 12, is named for Beverly Hills’ longtime executive director of public affairs and recognizes an employee who has a true vocation for serving the community and who has demonstrated expertise and commitment with grace and humility.

“The City Council is so pleased to recognize Chief Barton for his remarkable contributions to our community,” Mayor Lester Friedman said. “During his 25 year career with our city, Greg has been on the front lines working to save lives, property and keep our city safe.  On behalf of the Beverly Hills community, we thank him for his dedicated service and the example he sets for all of us.”

Prior to his appointment as fire chief in June 2017, Barton served as deputy fire chief, shift battalion chief, fire marshal, deputy fire marshal, fire captain, fire inspector and firefighter for the BHFD. Barton is a member of the board of directors for the Maple Counseling Center, an executive team member on the Beverly Hills 9/11 Memorial Committee, director of the Beverly Hills Fire Chief Funds and governance board representative for the city of Beverly Hills on the Interagency Communications Interoperability System.

“I am truly honored and humbled to receive the Fred Cunningham Award,” Barton said.  “If you do something you like to do, you’ll never work a day in your life. That is so true, I have a dream job as a firefighter and on top of that, I work for the dream community of Beverly Hills. Thank you all.”