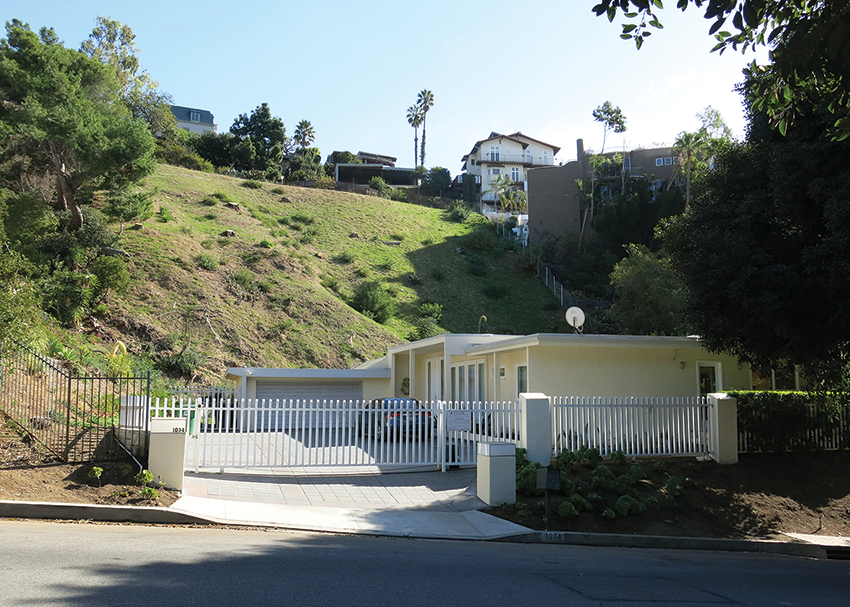 The Los Angeles portion of the three lots in question towers over the Beverly Hills portion, which is in Trousdale Estates. (photo by Cameron Kiszla)

Beverly Hills may ban adjustments to property lines that straddle the border between Beverly Hills and nearby cities.

On Jan. 12, the City Council considered an appeal of a decision the Beverly Hills Planning Commission made last year to deny developer Shalom Gozlan the right to combine three lots – one facing 1034 Hillcrest Road in Beverly Hills and two facing 9468 W. Sierra Mar Drive in Los Angeles – into two lots.

The existing Hillcrest Road lot is entirely within Beverly Hills, while the two Sierra Mar Drive lots are in Los Angeles. Under Gozlan’s plan, the two Los Angeles lots would be merged, while portions of each lot would be added to the Beverly Hills lot.

If they had been approved, both of the new lots would have been at least partially in Los Angeles. The Sierra Mar Drive lot, entirely in Los Angeles, would be located on a hill overlooking the Hillcrest Road lot, which would have spanned the border of Beverly Hills and Los Angeles.

To bolster his argument that the council should overturn the Planning Commission’s decision last year to deny the lot line adjustment, land-use attorney Benjamin Reznik of Jeffer Mangels Butler and Mitchell, who represents Gozlan in the attempt to change the lot lines, pointed out that the city of Beverly Hills does not prohibit parcels of land from being in both Beverly Hills and a neighboring city.

“There is nothing in your general plan that says you can’t have a lot that goes through two jurisdictions,” Reznik said.

In another attempt to earn the council’s approval, Reznik said his client had agreed to enforce the rules of Beverly Hills in developing a new home on the lot that would span the cities’ border. Located in Trousdale Estates, the Hillcrest Road lot is subject to a height limitation of 14 feet, among other regulations, though the Los Angeles side of the property could contain a home of up to 30 feet if no deal were reached. Reznik said his client agreed to a 14-foot height limit for the entirety of the new Hillcrest Road lot if the lot line adjustment was approved.

Reznik also made clear what could happen if his client’s deal was not accepted: two homes would be built in Los Angeles, one on each of the Sierra Mar Drive lots, in addition to a third home being built on the Hillcrest Road lot.

“We go with either what’s going to be two homes, a Beverly Hills home and an L.A. home, or we go back to three lots … We’ll have two homes on top and one on the bottom,” Reznik said.

Mayor Lester Friedman offered Reznik a chance to return to the Planning Commission to see if a deal could be reached, but Reznik declined, citing the outcry from neighbors in Trousdale Estates who have pushed back on the plan. Instead, Reznik preferred to leave the final decision to the council.

“There are people in the community who are going to be opposed, no matter what … Going back is just a nightmare again. I can’t put my client through that,” Reznik said.

The council members decided against allowing the lots to be adjusted in Beverly Hills and decided to move forward with potentially adopting an ordinance to prevent any landowner from adjusting lot lines that would span city limits.

“We can absolutely pass a regulation saying lot line adjustments cannot be extended into other cities,” Councilman John Mirisch added.

The council will consider the matter again in its next meeting on Jan. 26.

“I would do it sooner than later,” Councilman Julian Gold said.