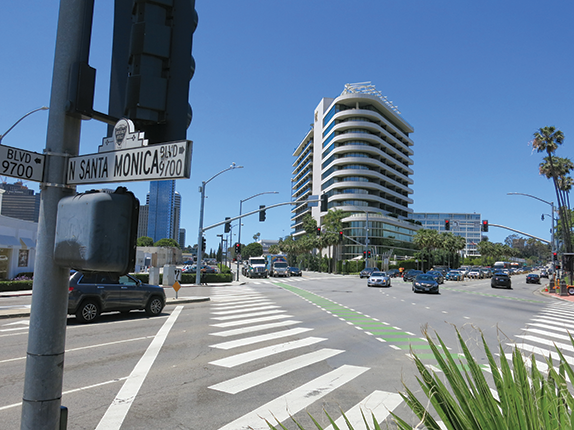 Planned improvements to Santa Monica Boulevard could be one of several projects that have to be delayed due to budgetary constraints. (photo by Cameron Kiszla)

The Beverly Hills City Council received a budget update on Jan. 12, and the city’s budget deficit is larger than anticipated at $10.9 million.

Last year, the council approved a budget that included a deficit of $3.75 million with the expectation that the number would change as the impacts of COVID-19 on the city’s sales and hotel taxes was more fully known, but the ongoing pandemic and the frequent protests – and accompanying police presence – have further strained the city’s finances. Jeff Muir, the city’s director of finance, said of the additional deficit, $6.2 million can be attributed to the pandemic and protests.

“Overall, we’re projecting a little bit of an increase over the budget, and that’s almost entirely driven by higher than anticipated personnel costs, particularly related to the overtime and other costs … of necessary public safety responses,” Muir said.

Councilman John Mirisch inquired about potentially recouping some of that money from the protesters – there were protests in support of Black Lives Matter last summer, but recently, supporters of President Donald Trump have regularly protested in the city – but City Attorney Laurence Wiener informed him that was likely impossible.

“This is directly impacting our ability to fund services that our residents expect because we have a few people who want to protest in such a way that we need extra police presence … This is something that, in theory, could bleed a city dry,” Mirisch said.

The council also discussed the city’s early retirement and voluntary separations programs, which were expected to save the city approximately $6.7 million. However, participation has been lower than anticipated, and the estimated savings are now $5.9 million, according to the city staff report.

“I think we’re going to need to start thinking of other ways [to reduce personnel costs], because it wasn’t accepted at the rate that we’d hoped,” Mirisch said.

In response to the updated numbers, the council planned to do a thorough priority-setting meeting this year, something the pandemic prevented last year, and take a look at where money could be saved, such as by reducing the number of capital projects the city expects to fund next fiscal year. Some prominent capital projects include the Metro North Portal, the La Cienega Park and Recreation Center, the Complete Streets program, Santa Monica Boulevard Streetscape improvements and improving the Wilshire Boulevard streetscape in anticipation of the Metro Purple Line subway station at Wilshire and La Cienega boulevards being completed in 2023.

“I think this year, we need to put pretty much everything on the board and talk with the council about what you’d like to see done in the next year, focus on deliverables and what we can do,” City Manager George Chavez said.

The council agreed to use reserve funds to cover the budget deficit, as multiple council members said they could not support a new tax on residents.

Additionally, the council agreed to support providing funding to the Beverly Hills Conference and Visitors Bureau and Rodeo Drive Committee, which typically get one-seventh of the hotel taxes paid in the city so they can market the city as a tourism destination.

Despite the city’s strained finances, Vice Mayor Robert Wunderlich called the marketing money “an investment to get revenue in the future” for Beverly Hills.

“One expects a return on investment. It’s not something that you pay out and it just goes away … We can’t wait for the revenue to be there. We have to invest to be able to stimulate [the local economy] so that revenue will be there in the future,” Wunderlich said.

“There is going to be a significant pent-up demand for travel … I certainly want Beverly Hills to be among the first places people would like to go to when travel is permitted and it’s safe to do so,” Friedman added.

Despite the city’s efforts, Councilman Julian Gold, an anesthesiologist, made clear that he believes the city may continue to see the impacts of the pandemic late into 2021, a timetable longer than many city officials were hoping for last year.

“I honestly don’t think it will be spring, summer when we see a rebound,” Gold said. “At the rate we’re going with vaccinating people … I would guess that we’re going to see a rebound, if we’re lucky, in the holiday season, maybe November.”

If tourism continues to suffer and the pandemic impacts the city further, council members said they may have to examine more cuts to city services.

“Let’s continue to think of ways we can tighten our belts and produce value for our residents,” Mirisch said.