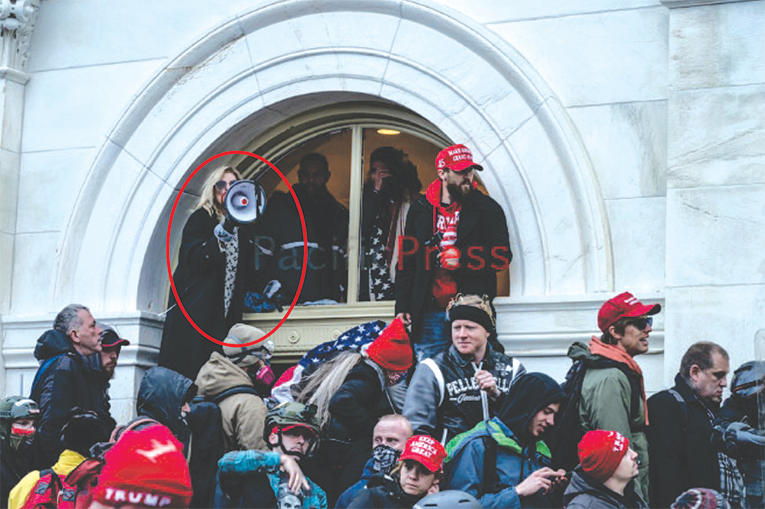 The FBI identified defendant Gina Bisignano in this image from a video posted on social media of rioters at the U.S. Capitol. The FBI included it and many others in a statement of facts in the case against Bisignano. (photo courtesy of the FBI/U.S. Department of Justice)

Federal authorities announced on Jan. 19 that three Beverly Hills residents were arrested and charged for allegedly being involved in rioting that occurred at the U.S. Capitol on Jan. 6.

The defendants, Gina Bisignano, 52, John Strand, 37, and Simone Gold, 55, face multiple felony counts. FBI spokeswoman Laura Eimiller said they were arrested without incident with the assistance of the Beverly Hills Police Department. The locations of the arrests were not disclosed.

Strand and Gold, who are listed in the same criminal complaint, were taken into custody on Jan. 18. Bisignano, who is charged in a separate case, was arrested on Jan. 19. Statements of fact filed with the cases identify Strand and Gold as knowing each other, but do not make connections between them and Bisignano, an aesthetician who owns an eyelash and skincare business in Beverly Hills.

Bisignano, who has allegedly been a frequent participant in pro-Trump rallies in Beverly Hills, was charged with six counts, including civil disorder, destruction of government property, aiding and abetting, obstruction of an official proceeding, entering a restricted building or grounds, and violent entry and disorderly conduct. Authorities allege in a statement of facts accompanying the criminal complaint that they received multiple tips from people beginning on Jan. 10 about videos posted on social media with alleged footage of Bisignano at the U.S. Capitol on Jan. 6.

In one video, Bisignano looks directly into the camera and states her first and last name, her place of residence and her Instagram account information. In a separate video, Bisignano stated the name of her business while speaking through a bullhorn to the crowd, authorities allege. She was also identifiable by a designer sweater she wore throughout the riot, as well as sunglasses and long blonde hair, the statement of facts read. A California Department of Motor Vehicles photograph obtained by the FBI confirmed her identity, authorities said.

Still images from the videos accompany the criminal complaint and statement of facts, many allegedly showing Bisignano at various locations during the rioting, including on a ledge of the U.S. Capitol, and inside a broken window or portal urging others to enter the building. In one video, she can be heard stating “Gina’s Beverly Hills. Everybody, we need gas masks, we need weapons, we need strong angry patriots to help our boys. They don’t want to leave. We need protection,” using a bullhorn as the crowd of rioters presses close to the building.

In another video, Bisignano allegedly encourages the crowd as rioters attack officers nearby with a fire extinguisher. Later, Bisignano appears to enter the Capitol through a small square opening that leads to the interior of the building. She addresses other rioters from what appears to be the inside of the building, authorities said. According to the statement of facts, she said, “We need Americans. Come on guys. We need patriots. You guys, it’s the way in. We need some people, we need some people.” Another individual nearby can be heard yelling “if you have a weapon, you need to get your weapon,” the statement of facts read.

Additionally, Bisignano allegedly replied to a tweet made by former President Donald Trump on Dec. 19 about a “Big Protest in D.C.” on Jan. 6, stating “I’ll be there.” She also allegedly posted a message on Jan. 11 indicating that she had gone to the U.S. Capitol. Another photograph included in the statement of facts allegedly shows Bisignano outside the U.S. Capitol on Jan. 6 with makeup running down her face because she was pepper-sprayed by police, she claimed. Authorities also cited a response Bisignano allegedly made to a criticism of her actions on social media in which she outlined her intentions for being at the Washington, D.C., rally, as well as a newspaper article in which she recounted her experiences during the rioting. 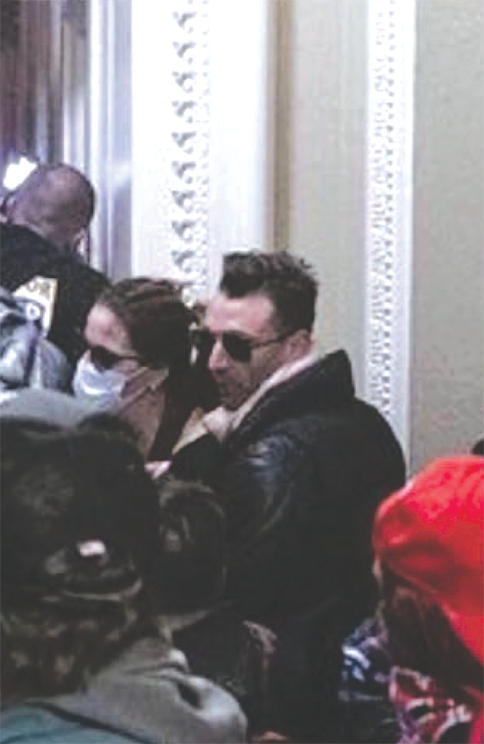 A photograph used as evidence allegedly shows defendants Simone Gold and John Strand inside the U.S. Capitol during the rioting. (photo courtesy of the FBI/U.S. Department of Justice)

The separate case against Gold and Strand also included an affidavit by the FBI about their alleged involvement in the rioting. It included photographs from social media that allegedly show the two outside and inside the U.S. Capitol. They are each charged with entering a restricted building or grounds, and violent entry and disorderly conduct.

According to the FBI affidavit, authorities began receiving tips about Strand and Gold on Jan. 7. One tip was allegedly from a former acquaintance of Strand who saw a social media post he allegedly made showing him at the U.S. Capitol. Federal officials viewed the photographs and linked them to Strand, the affidavit read. They subsequently found other social media posts allegedly showing him and Gold together inside the U.S. Capitol. One of the videos was broadcast on CNN, the FBI affidavit read. Other photographs were found on open source social media channels. Gold also recounted her involvement in the rioting in a Washington Post article, authorities allege in the affidavit. An accompanying photo was credited to John Strand.

All three defendants appeared before U.S. Magistrate Judge John E. McDermott in Los Angeles on Jan. 19. Bisignano was released on $170,000 bail and was placed under home detention. A preliminary hearing is scheduled on Feb. 4. Gold was released on $15,000 bail and also placed on home detention. Her next court appearance will be a virtual hearing with a court in Washington, D.C., on Jan. 21. Bail was set at $20,000 for Strand, who was kept in custody until surety was approved. He will also be required to be on home detention, and no further court date was set.

Bisignano, Strand and Gold are among 105 people who have been arrested for allegedly being involved in the rioting, and officials are seeking more tips. The criminal cases are being overseen by U.S. Justice Department officials in Washington, D.C., The nationwide investigation being led by the FBI’s Washington, D.C., Field Office, with assistance from field offices in cities throughout the country. Anyone with tips can provide information by calling (800)CALLFBI, or the Los Angeles FBI Field Office at (310)477-6565.