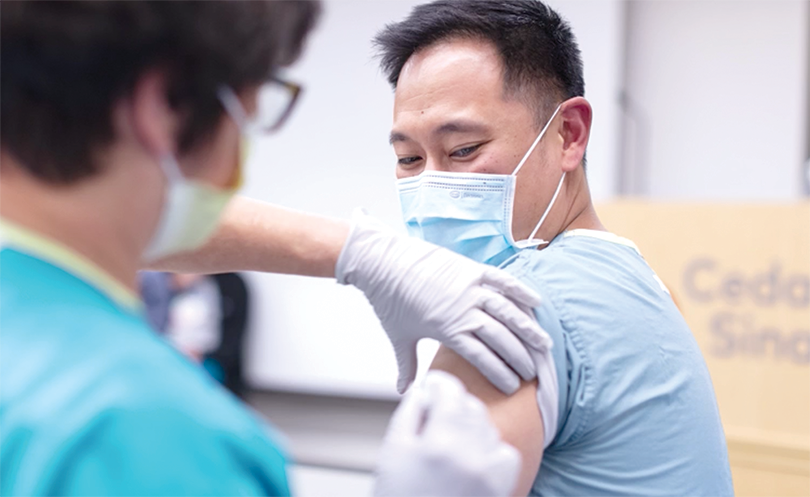 Health care workers, including those at Cedars-Sinai, have already begun receiving the vaccine for COVID-19. (photo courtesy of Cedars-Sinai)

The Beverly Hills City Council and city staff are hopeful that the coronavirus vaccines from Moderna and Pfizer will be administered to many in the city in the coming months, but so far, distribution is falling behind where many hoped to be.

Meena Janmohamed, emergency management manager for the city, updated the council on the status of vaccine distribution and the local impact during the Jan. 12 council meeting, noting that “we have quite a ways ahead of us on this journey to put the pandemic behind us.”

“All these projected timelines are very loose and fluid at this time [but] the goal … is to have the general population inoculated by this summer,” Janmohamed said.

The Los Angeles County Department of Public Health is leading local vaccine distribution, and the department is already ramping up efforts to vaccinate the public beyond the health care workers and residents of long-term care facilities who became eligible to receive a vaccine in December as part of Phase 1A. On Jan. 13, state officials announced that the vaccine is available to anyone age 65 or older as well.

“What we’ve been told is that county Public Health will likely have one megasite per supervisorial district, but this has not been confirmed yet,” Janmohamed said.

When more doses are available and more members of the public are eligible as part of future phases, the expectation is that local pharmacies can become distribution centers before ultimately, the vaccine becomes available at primary care providers. So far, 17 of the city’s 22 pharmacies have registered with the county to become vaccination sites, Janmohamed said.

City Council members also encouraged the public to register their interest in receiving the vaccine by contacting Mickey Fine Pharmacy and Grill and signing up for the vaccine waitlist.

Additionally, the city has a plan to turn Roxbury Park into a vaccination site “should L.A. County choose to activate this site and bring it online,” Janmohamed said, but it remains unclear if the Department of Public Health will choose to utilize the park.

“We have a site plan. We have an incident plan. What we are waiting for is to be nominated by Public Health to bring that site online. What we’re seeing is the larger sites are being brought online, but at every step of this process, we’ve made clear we’re ready, willing and able to bring our site online,” Janmohamed said.

To help in that effort, Mayor Lester Friedman wrote a letter on behalf of the council to Gov. Gavin Newsom and Los Angeles County officials offering “any assistance Beverly Hills can provide” to help distribute the vaccine.

The vaccine is not yet available for people who fall in Phase 1B – those who work jobs that could expose them to the virus, such as teachers, emergency workers and manufacturers – and Phase 1C – people age 50 to 64, and those who have an underlying health conditions, or the general public, which falls in Phase 2.

That has not stopped people from trying to skirt the rules to get their doses early, according to Janmohamed and Councilman Julian Gold – an anesthesiologist – who said they’ve heard of people driving hours away if they heard there are vaccines available to the public. Receiving a vaccine outside of one’s turn would not only be unfair to those who are at higher risk of contracting a severe form of COVID-19, Gold and Janmohamed said, but it exposes the vaccinated person to unnecessary risk.

“Most legitimate agencies will not take people out of order, out of turn or anything like that,” Gold said.

Instead of being exposed to a potentially fake vaccine, people should continue to socially distance, wash their hands, wear a mask and other safety precautions, Gold said.

“To get outside of the order the state has created really creates risk for people. It’s much slower than anybody wanted, but it is on the horizon. Don’t do anything precipitous that potentially puts you at much greater risk,” Gold said.

My husband who is 88 and ahigh risk as he is a heart patient at Cedars,and I 86 would like to put our names on the waiting list for the vaccine. Thank you