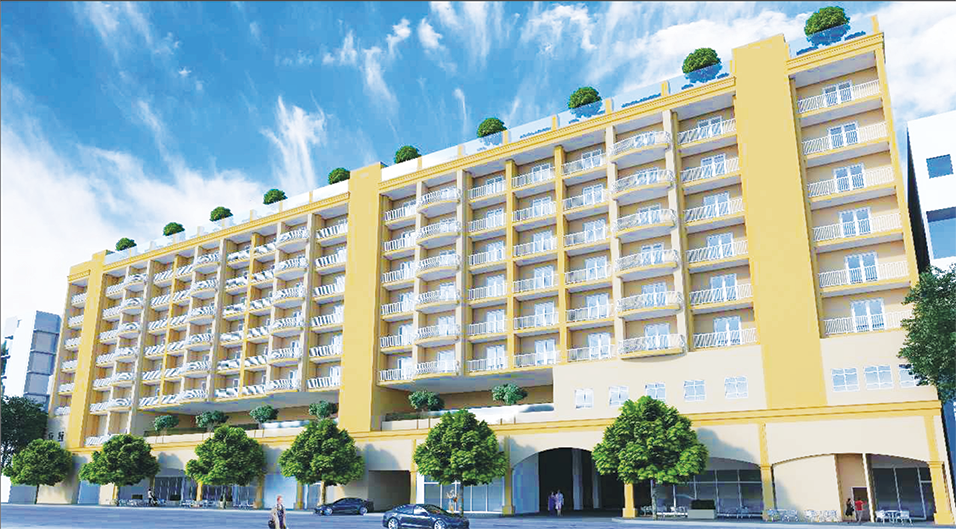 A proposal to develop an eight-story hotel on Restaurant Row was shot down by the Beverly Hills Planning Commission. (rendering courtesy of the city of Beverly Hills)

The Beverly Hills Planning Commission rejected a plan for an eight-story hotel at the south end of Restaurant Row at 55 N. La Cienega Blvd. during its Jan. 14 meeting. The proposal submitted by developer Abraham Assil would have created 216 hotel rooms at the current home of the Stinking Rose restaurant, abutting a residential zone.

“We have to uphold our standards and our principles, and this just doesn’t meet them,” Planning Commission Chair Peter Ostroff said.

The commission unanimously supported denying the proposal. Vice Chair Lori Greene Gordon, who was part of the City Council/Planning Commission liaison which concluded last August that the project should not move forward given its scale and design, was not in attendance for the 4-0 vote.

Assil originally filed the development application in May 2016. Since then, planning staff has reviewed and provided numerous correction letters to the developer on various iterations of the project, one of which proposed a 247-room hotel.

“Throughout the last four years, staff has expressed concerns to the applicant about the scale of the proposed development, as well as the quality of the submittal materials,” the staff report read. “Staff does not feel that the project can be supported at this time, or that the submitted materials are adequate to continue further review of the project at this time.”

According to the staff report, as proposed, the project did not comply with several Beverly Hills municipal code standards, including height, floor area and commercial-residential transitional use standards.

According to the report, staff brought the project to the Planning Commission to definitively deny the project in an effort to prevent additional expenditures of city time and money.

The city received multiple letters from residents opposing the project and several residents spoke out during the meeting.

“The subject property is literally right behind our house,” Pamela Kohanchi wrote in a letter to the Planning Commission. “The proposed project is not zoned for what they are asking to do, nor should it be. This is a residential neighborhood and literally our backyard. Having a hotel that goes eight stories up would be an intrusion of privacy and the right to the free use and enjoyment of our home, our property.”

“We just are kind of surprised that the commission is even considering the proposal given all the ways it goes against the city’s regulations … including the fact that there’s no setback,” resident Laurie Lande told the commission during the meeting. “This is a residential neighborhood with a lot of children that attend the nearby Horace Mann School and we hope that we can keep it as residential as possible.”

Portions of the hotel, as planned, would have been set back just 10 feet from single family residences.

There were no letters or comments in support of the project.

Assil told the commission that he believed the “silent majority” wanted the project in the southeast.

“Change is often necessary, especially for progress,” he said. “In time, the community will reap the most benefit [from the project].”

Assil said he believed that the community would embrace the hotel once developed as it would provide them with a “lively environment” and “pleasant atmosphere” where they could gather for a drink or a cup of coffee.

“I am certain the elderly, those who no longer drive, would be the biggest beneficiaries,” he said.

Ostroff said that Assil had told him that there had been 60 or 70 letters submitted in support of the project – a claim which city staff subsequently clarified as untrue. Those letters, according to Assistant Director of Community Development Ryan Gohlich, were actually just responses to a survey that had been sent to the community about what they would like to see developed in the area.

“The comments aren’t really related to the project. They’re more general comments of what people would like to see in the project,” he said, underscoring that the comments didn’t address an “accurate representation” of the proposed hotel.

In denying the applicant’s proposal, commissioners suggested that Assil consider alternative development opportunities for the site, which is in the city’s newly created mixed-use zone.

“The starting point is to just do what the code permits,” Ostroff said, noting that the project was “just so far off of anything that we could really seriously consider.”

The existing zoning allows for three stories extending up to 45 feet in height. Other properties located on the block range from from one to four stories.

“This is a very important site for the city and it deserves serious, professional attention,” Ostroff said.

The site, which is almost an acre, is near the future subway station at the intersection of Wilshire and La Cienega boulevards.

“I think it can be reviewed again if you want to take more suggestions in terms of giving more space to greenery, lower height, mixed-use,” Commissioner Myra Demeter said. “There are many things that could be put into this space that I think would be acceptable. But as it stands now, it doesn’t conform with the precepts of our general plan.”

Assil did not indicate any plans to return to the commission with a new proposal for the site. Instead, after the vote, he criticized the commission’s decision.

“If the city continues that mindset, for the next 50 years … the city is not going to see any serious development come in and invest and risk its capital in doing anything in southeast La Cienega,” he said.