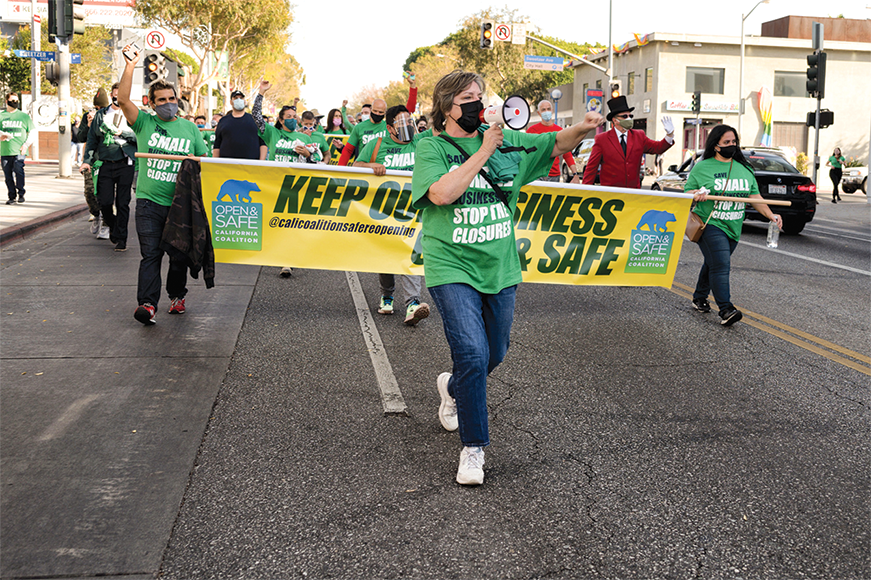 Local chambers of commerce and business groups marched on Dec. 12 to push for businesses to reopen safely. (photo by Jon Viscott/courtesy of the West Hollywood Chamber of Commerce)

During a discussion regarding the city’s COVID-19 relief efforts and the pandemic’s impact on the local business community, Fernando Morales, district director for Kuehl’s West/Metro Los Angeles office, provided an update from the county and answered questions.

Multiple council members expressed to Morales their displeasure with Kuehl, who voted in favor of restricting outdoor dining last month. That order was overturned by a Los Angeles Superior Court judge, though the state’s stay-at-home order still prohibits restaurants from offering indoor or outdoor dine-in service.

“For now, all I’ve heard is ‘stay home and we’ve got you,’ but I don’t feel like you have us, at all … People are looking for leadership from Sheila and others and are not seeing it. I lived through the AIDS epidemic. We know what lack of leadership from the county looks like, and it looks a lot like this,” Councilman John D’Amico said.

Councilwoman Sepi Shyne criticized the timing of the outdoor dining ban, which came after businesses made investments to protect their customers and employees. She also asked about the timing of the county’s COVID-19 safety compliance certificate program, which shows which businesses have been trained and have agreed to follow the Los Angeles County Department of Public Health regulations.

“I think it was worth looking into something like this months ago, before we reopened outdoor dining and then here we are, having to reclose outdoor dining after not only the city of West Hollywood, but our small businesses spent so much money,” Shyne said.

Councilwoman Lauren Meister added that the closure of outdoor dining limits where people can gather, and many people might now get together indoors, where the virus is believed to spread more easily.

“By closing our outdoor dining, we have concerns that that is going to have an effect on people gathering in their homes,” Meister said.

Mayor Lindsey Horvath and Councilman John Erickson asked about measures that could make it easier for businesses to reopen safely and remain in operation, such as rapid testing and relief funds. Genevieve Morrill, president and CEO of the West Hollywood Chamber of Commerce, and Nick Rimedio, chair of the West Hollywood Chamber of Commerce Board of Directors, stressed the importance of allowing businesses to reopen, calling the closure of many businesses “a public health issue” leading to anxiety, depression, homelessness and other concerns. Those sentiments were echoed in the Dec. 12 Save Small Business Protest March organized by the West Hollywood, Hollywood and Beverly Hills chambers of commerce, among other business groups.

Morrill added that Kuehl has been invited to have discussions with local business chambers, but she has yet to schedule a meeting.

Rimedio, who praised the West Hollywood City Council, placed blame not only with the county supervisors, but with the state government for the lack of preparation for the current spike in COVID-19 infections.

“There is zero confidence in the county and state leadership. Forget Donald Trump. We’ve had eight months to hear about the predictions of a holiday surge, a holiday spike, eight months we’ve been working on this … The only people that have shown any regard, with any sincerity, is our city leadership,” Rimedio said.

As part of the actions taken on Dec. 7, the council unanimously agreed to send letters in support of the business community to Kuehl, other county leaders and state officials. Morales pledged that the county would continue to seek assistance for businesses and residents.

In addition to the letters of support, the council unanimously received its survey of renters from staff, allocated additional funding for local groups – including $150,000 for the National Council of Jewish Women Los Angeles, $190,000 for the Alliance for Housing and Healing, $115,000 for Project Angel Food and nearly $15,000 for Jewish Family Services’ Nutrition Program – and restructured the city’s rental assistance programs.

One measure that was not approved, however, was a request for $60,000 for the Coalition for Economic Survival to provide “emergency proactive educational outreach, advice and assistance to tenants,” according to the staff report.

Peter Noonan, the city’s rent stabilization and housing manager, said West Hollywood expects to see more of its residents facing eviction as the pandemic continues and some of the eviction protections at the state and federal level are weakened.

“We see that this is a real value and opportunity to explore a means for CES to be an official, formal partner of the city, to help staff in that housing counseling, to address what we expect is going to be an uptick in the amount of questions and calls that come into us about their specific situation … and avoiding eviction,” Noonan said.

The request for funding was unanimously tabled after D’Amico asked staff to come back with a scope of services that CES “believe[s] they can accomplish with those dollars,” as he questioned the quality of legal advice from someone earning that salary.

“Sixty thousand dollars a year does not buy an employee that I would want to send anyone to with questions about their rent,” D’Amico said.

Meister also took issue with the proposed contract, arguing that the money could be better spent, especially because the city already has a contract with Bet Tzedek to provide similar services.

“The things that we don’t need to be spending money on, we shouldn’t be, because we really need to think about every $1,000 we spend as somebody’s rent,” Meister said.