WeHo tries to get public on board for rail 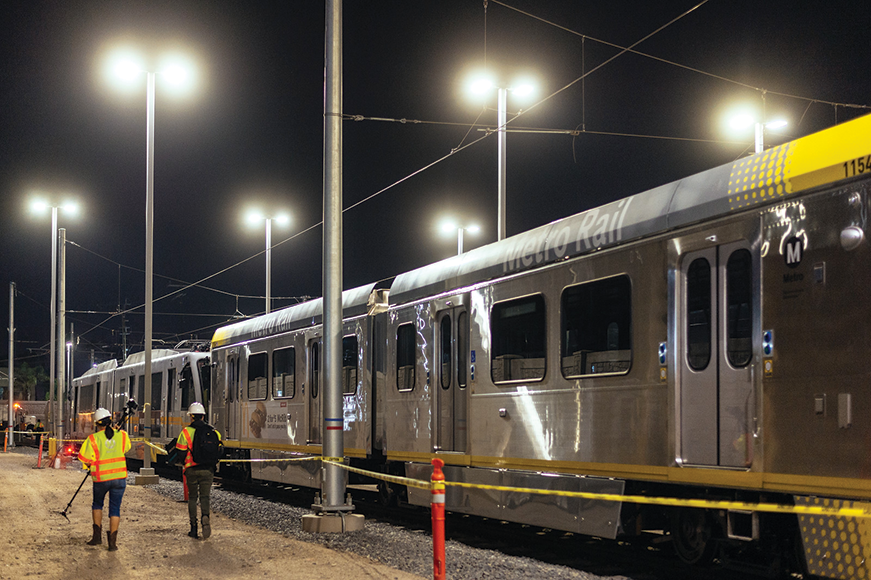 West Hollywood officials hope to help bring Metro rail service to the city in the next decade. (photo courtesy of Metro)

The West Hollywood City Council authorized an additional $80,000 for community outreach related to the Crenshaw Northern Extension Metro rail line on Dec. 21. The vote passed unanimously as part of the council’s consent calendar.

“It was important for us to move forward with an outreach plan to bring our community and the region along. We know that people in West Hollywood have been waiting for this for a long time so we’ve got to keep moving forward,” Mayor Lindsey Horvath said.

The funds, to be paid out of the city’s portion of Measure M tax funds for transportation-related uses, bring the total amount to be paid to the Robert Group for outreach assistance to more than $250,000 since the Los Angeles-based public affairs firm began working with the city in 2015.

David Fenn, an associate planner for the city, said it’s important to get the outreach started now so that any potential problems can be mitigated before they arise.

“Once we’re turning dirt and shovels and bulldozers are moving, there’s not really a lot of recourse if there are issues with the design. It’s harder to change it later, whereas now it’s more fluid,” Fenn said.

Fenn said the city will encourage its residents to contact Metro directly with their concerns and preferences, as Metro is studying three potential routes. The routes all begin where the Crenshaw/LAX line currently ends at Crenshaw and Exposition boulevards, then travel north up Crenshaw Boulevard and San Vicente Boulevard. Once on San Vicente, two routes split, one going north up La Brea Avenue and another going up Fairfax Avenue.

The Fairfax route splits again at Beverly Boulevard, with the hybrid route heading west until it turns north onto San Vicente Boulevard again, then turns at Santa Monica Boulevard. All three routes run east along Santa Monica Boulevard, then turn north on Highland Avenue before joining the red line at the Hollywood/Highland station. A potential continuation of the line past the Hollywood/Highland station, which would provide a more direct connection to the Hollywood Bowl, is also considered.

Two of these options will eventually be ruled out, and given that the routes all service West Hollywood to different degrees, Fenn said it’s important for the city’s residents to make their voices heard soon and often.

“They’re going to ultimately put this where they hear the people want it. If our residents are quiet and people from farther east are more vocal in this process, there’s a real possibility that Metro could choose another alternative. Now is the time for our residents and businesses to start talking to Metro directly,” Fenn said.

Due to the pandemic, Fenn said the city will begin with digital outreach – such as on billboards and on the screens located in the city’s new bus shelters – and mailers, then return to in-person events once it’s safe to do so.

“It’s totally dependent on what happens with the pandemic,” Fenn said. “The way we drafted the budget for the consultant, it’s intended to be flexible.”

“I think the more information we are able to share with people, the better, and meeting people where they’re at is essential, and that’s what we’re doing … During this time of COVID and staying at home, people are more digitally engaged than they’ve ever been, and we should be embracing 21st century methods of communication with people and using all resources available to reach people however we can,” Horvath said.

Other outreach methods are aiming to reach potential riders of the new rail line. For instance, the city will unveil early next year signs on potential station sites that include QR codes that will take users to an interactive map showing how their commute or trip could be shorter with the Crenshaw Northern Extension.

“I don’t know if people have put together [that] if I’m at Santa Monica and San Vicente, I could get to the airport in [32 to 34] minutes, regardless of traffic, every time [using the rail line],” Fenn said. “It’s going to be huge to let people visualize that and imagine the impact on their everyday lives.”

The city’s outreach program will also examine different funding methods for the project, which is expected to cost several billion dollars in total. With enough funding, however, the project could get accelerated by up to 20 years from an expected 2047 opening date to an opening in time for the 2028 Olympic Games in Los Angeles. That could require West Hollywood to pay 25% of the project cost within city limits – potentially hundreds of millions of dollars – and the city is looking to partner with the city and county of Los Angeles, as well as the state and federal government, to find a way to fund the project and accelerate the timeline.

“We’ve been waiting a long time in West Hollywood for rail to come to our city,” Horvath said. “If we want the opportunity to accelerate [the project] … we’ve got to be ready to move. it’s important that everyone be dialed in and understand what’s happening with the project as it moves forward. We need to be ready to move, and that’s what our residents want, too.”

Fenn noted that while “everything would have to go perfectly” from this point onward for the rail line to be finished in time for the Olympics, it is still possible. And even if the project is not done in time for 2028, any accelerated timeline would bring a big benefit to the residents of West Hollywood.

“This is a 100-year investment that will change mobility for West Hollywood and Central Los Angeles, and our residents are supportive of it,” Fenn said. “The ball is really in Metro’s court and our funding partners to get it across the finish line. It would be great to get it done [in time for the Olympics], but if we can’t, it’s still great for the residents and the city.”

This article was updated at 1:38 p.m. on Jan. 4 to reflect that the travel time from Santa Monica and San Vicente boulevards to Los Angeles International Airport is expected to be 32 to 24 minutes once the Crenshaw Northern Extension is complete.