WeHo to rename library in honor of RBG 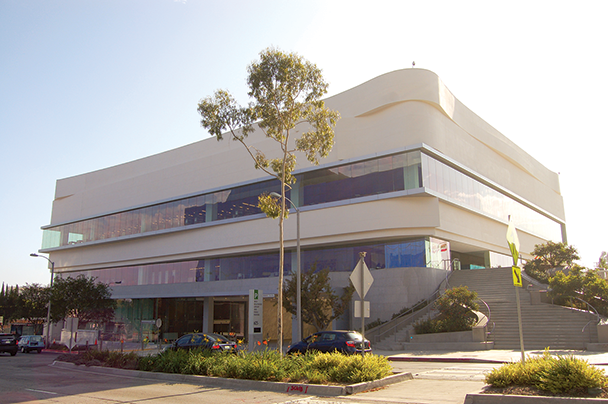 The West Hollywood Library will be renamed in honor of the late Supreme Court Justice Ruth Bader Ginsburg. (photo by Edwin Folven)

The West Hollywood City Council voted 3-2 to rename the West Hollywood Library in honor of the late Supreme Court Justice Ruth Bader Ginsburg on Dec. 21. As both an advocate and jurist, Ginsburg dedicated her life to championing race and gender equality, as highlighted by all council members.

“She was an amazing inspiration to all of us, a champion who shows the values that we represent here in WeHo,” Mayor Pro Tempore Lauren Meister said. “This is not something that just came out of the blue, this is something that I brought up months ago when she passed.”

The item will again return to council for final approval, but will include an updated naming policy. West Hollywood’s naming policy currently requires that two years pass after the honoree has died before land, buildings or facilities can be named for a deceased person.

The city staff report highlighted how during Ginsburg’s lifetime, she left an indelible mark on law, feminism and everyday life in America, with her contributions to gender and LGBTQ equality having profoundly impacted the lives of many residents of West Hollywood. Born in 1933, Ginsburg was appointed to the U.S. Supreme Court by President Bill Clinton, becoming the court’s second female justice.

Councilman John D’Amico highlighted how many of the buildings throughout the city were named after men, with many of those namings having taken place before West Hollywood was incorporated. He characterized the decision to rename the library in Ginsburg’s honor as “brilliant.”

“I can say with certainty that Ruth Bader Ginsburg is an extraordinary American of heroic proportions,” he said. “Would we be smart enough to name the library after her, we would be making a really great choice.”

Councilwoman Sepi Shyne, who said she supported having greater community input in the process, advocated that the city expeditiously make the change to be at the forefront as municipalities across the nation take steps to honor Ginsburg by renaming buildings in her honor.

“Ruth Bader Ginsburg was an icon for women, our LGBT community, for workers and every progressive value that West Hollywood holds,” she said. “Ginsburg fundamentally expanded access to the American promise of liberty and equality for all. Her legacy is felt by all of us, every single one of us sitting on this council.”

Mayor Lindsey Horvath and Councilman John Erickson both voted against the request to rename the library, advocating that there should be a more robust selection process in choosing a name.

Horvath said she believed it was important to have a community process that contemplated others for fair consideration.

“I would like to see our process, being the progressive city that we are, be open to considering other names and allow for a public process that considers other names,” she said. “I think what’s sad to me about this conversion is that at a time when it should be such a unifying thing – she’s such a strong and important figure – we’re having a conversation that has not certainly engaged the broader public and for the few people that have been part of the conversation, it’s divisive.”

Erickson said he thought the transgender, resident and women’s advisory boards should all weigh in on the naming process.

“I would like to see our public really involved in this,” he said. “I think that no matter where we go with it, if Ruth Bader Ginsburg is meant to be emblazoned on the West Hollywood Library, I think many people will come to that conclusion naturally.”

In addition to multiple written comments, three people used the public comment portion of Monday’s council meeting to advocate against renaming the library in honor of Ginsburg.

“I just don’t feel that [she] would be the right person to have our library named after,” she said, noting that she was a “big fan” of Ginsburg. “In the last couple of days I’ve talked to some people, heard a lot, and it does seem like there are a lot of different opinions about this particular issue.

“I think maybe an alternative might be … [wait] until the spring time and give direction to the city clerk to do a community process where the community can talk about whether or not the library should be named for somebody, and if it should be, then they will come up with the criteria and bring back suggestions to the City Council so then you could take action in the future.”