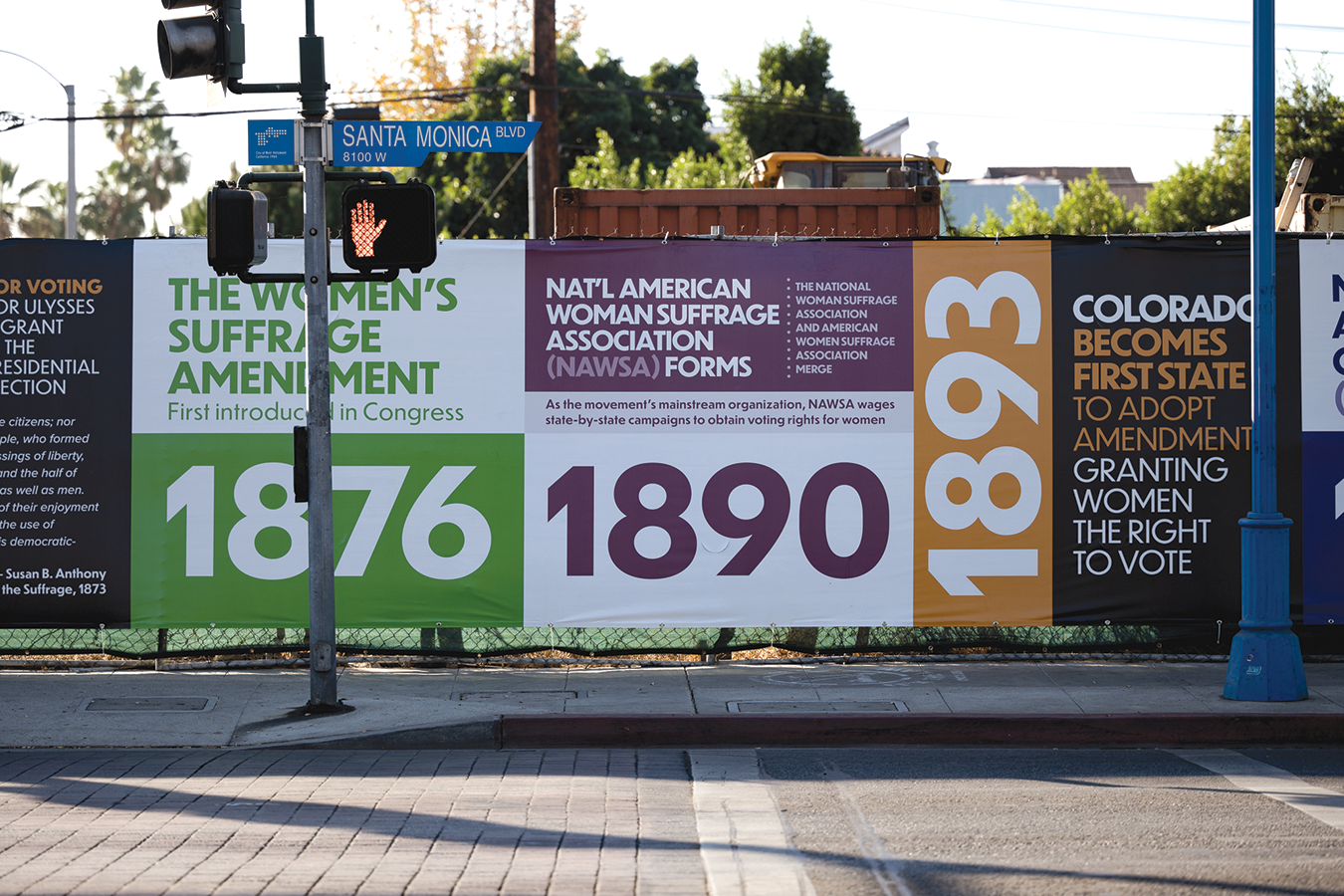 The city of West Hollywood’s public display on the history of the 19th Amendment includes a timeline of important milestones in the women’s suffrage movement. (photo by Jon Viscott)

The city of West Hollywood is continuing its celebration of the 100th anniversary of the passage of the 19th Amendment, which gave women the right to vote.

A large-scale public art banner display titled “Origin Story of Women’s Right to Vote” has been installed at the southwest corner of Santa Monica and Crescent Heights boulevards. The banners will be on display through the end of Women’s History Month in March and highlight important moments in the suffragist movement, from the 1848 Seneca Falls Convention through the present day. The banners include commemorative artwork commissioned by the Los Angeles County Department of Arts and Culture in collaboration with the Los Angeles County Women and Girls Initiative.

The project also incorporates environmentally-friendly technology. The banners were printed by Lithographix, a company that utilizes technology to create materials that absorb UV light, which helps remove pollutants from the air in furtherance of the city’s green initiatives and sustainability efforts.

“The passage of the 19th Amendment was an important milestone for women’s suffrage in the United States and, as we witnessed in the most recent presidential election, there is still so much to be done to ensure equal voting protections for all,” West Hollywood Mayor Lindsey Horvath said. “This historic centennial offers an unparalleled opportunity to commemorate a milestone of democracy, as the city continues its year-long celebration with an educational banner installation of the origin story of women’s right to vote. We will continue to explore the impact of the 19th Amendment on women’s empowerment and equal rights for all, including protection from voter suppression.”

Women worked for decades to win the right to vote, organizing in each state. Suffragists began a nationwide campaign and organized the first Women’s Rights Convention in Seneca Falls, New York, in 1848. “The Declaration of Sentiments” was drafted at the convention and an agenda was created for women’s activism that lasted for decades into the future. The 19th Amendment was passed decades later by Congress on June 4, 1919, and ratified by three-quarters of state legislatures on Aug. 26, 1920, giving women full voting rights.

California has a special connection to the advancement of the national suffrage campaign. In 1896, women in California lost the first election for the right to vote. More than a decade later, after much advocacy and lobbying, the measure narrowly passed by 3,587 votes on Oct. 10, 1911. With the passage of votes for women in California, the number of women with full suffrage in the U.S. doubled.

The city’s project is also a reminder that there is still more work in regards to voting rights, particularly for women of color, transgender women and women with disabilities, as well as immigrants, people of low socio-economic status, and the formerly incarcerated.