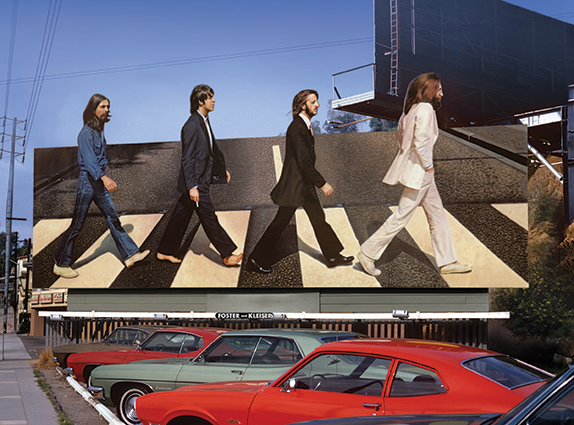 The Sunset Strip has long been known for its billboards, and a new policy aims to bring billboards back to the limelight in West Hollywood. (photo by Robert Landau, from his book “Rock ‘n’ Roll Billboards of the Sunset Strip”)

The West Hollywood City Council unanimously voted to approve a request to convert an existing static billboard to a digital billboard at 8743 Sunset Blvd., marking the first  time a billboard will be allowed to be converted under the city’s new billboard policy.

In 2019, the city adopted its first comprehensive update specifically for billboards and other types of creative advertising along the Sunset Strip.

“The Sunset Strip is a major economic engine for West Hollywood, with a long tradition of innovative and memorable signage,” the staff report read. “The creative legacy of billboards on the Sunset Strip provides cultural value to both the city and the greater region.”

According to West Hollywood Senior Planner Bryan Eck, 20 digital billboards will be built on the strip in the coming decade. In addition to the “excellence in design” that each new billboard must meet, according to the report, every proposed billboard must also meet the policy’s “stringent” operational standards.

“The Sunset Strip is such a premiere location and so lucrative,” Eck said. “We believe that because off-site advertising has been an integral part of the Sunset Strip for the past 100 years, we wanted to embrace it and really put the best standards in place.”

The billboard was unanimously approved by the city’s Historic Preservation Commission on Aug. 24 and the Planning Commission on Nov. 5.

The newly approved digital billboard will be developed with an “invisible frame” using cameras and LED technology to create a billboard whose frame can disappear as needed.

As part of the development agreement, the city is guaranteed a minimum annual payment of $850,000 from the billboard owner. For the first two years, the payment will be $500,000 to accommodate construction and installation costs. In year four, a 3% annual increase will be added to the annual amount and compounded over the life of the agreement.

Over the life of the 30-year development agreement, the staff report predicted the city would receive revenues in excess of $37 million.

In addition to the annual payment, the city will receive a revenue sharing payment equal to 30% of the gross annual third-party advertising revenue, if the owner receives revenue from a third party.

Additionally, during the life of the agreement, the owner must periodically update the sign’s technology, use the latest in green energy practices and annually allow 17.5% of the annual billboard operating time to be devoted to public and arts programming to appear on the sign – roughly two months a year. Also, the sign can at any time be used for emergency announcements.