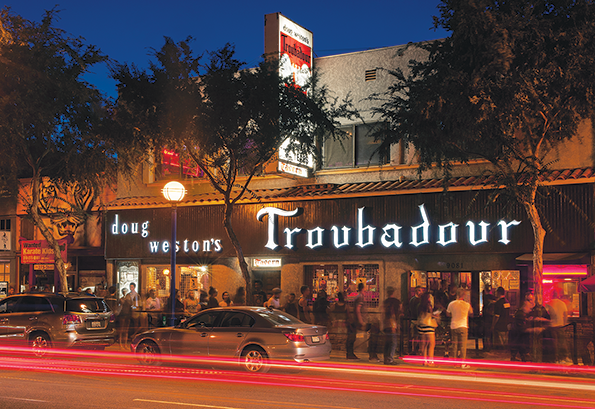 Clubs like the Troubadour have had no path to opening since March. (photo courtesy of the West Hollywood Chamber of Commerce)

Small brick and mortar retailers in West Hollywood can look forward to some additional economic help in the new year following the City Council’s vote on Dec. 21 to institute several business recovery measures.

“The intent behind this … really is to help our most vulnerable businesses,” Councilwoman Sepi Shyne said. “The whole point of this is to really keep our businesses going, at least until we get funding from the new federal government.”

In passing the item, the council directed staff to implement seven specific measures, including developing a small business grant program and organizing a business roundtable to gather feedback from small business owners, in addition to creating a Business Recovery Task Force to develop an economic blueprint for West Hollywood.

The item will return to council again in January with a more codified plan that also includes how to best allocate $250,000 to local businesses in a manner that will be most helpful. As outlined in the staff report, that amount could provide up to 50 grants at $5,000 each.

West Hollywood Chamber of Commerce CEO Genevieve Morrill said she was very supportive of the steps the council was taking to support the business community.

“This shows the business community the council’s commitment to our issues. And we can certainly use all the help we can get right now,” she said.

While grants ranging from $5,000 to $10,000 – the amount now under consideration – are unlikely to “save” a small business, according to Morrill, it will certainly help to ease the pain, she said.

Before the 4-1 vote, both Mayor Lindsey Horvath, the lone no vote, and Councilman John Erickson pushed back against immediately creating a task force, with Horvath suggesting that a council study session with the business community would be more meaningful.

“I don’t think we need another task force,” Erickson said.

Before reversing his stance on not wanting to pass the motion, Erickson noted that while he liked the idea conceptually, he didn’t support creating another Brown Act body which requires a host of protocols ensuring appropriate public noticing.

Horvath said that while she was supportive of the item’s intention, she was uncertain how the measures would be successfully executed and actually reach the people they’re meant to help.

The task force is intended to bring various stakeholders to the table to provide recommendations to the council on issues related to small business success, recovery, diversification and supportive policies.

Retailer Larry Block, who owns the Block Party and who ran for City Council on the November ballot, said the critical piece would be bringing back customers inside the stores.

“No matter what you do, and no matter what we do together, there’s no solution unless we’re opened up for business and can let customers come in and we can start rebuilding everything,” he said during public comment. “I do appreciate the effort. We need to bring customers back.”

The Dec. 21 staff highlighted how the COVID-19 public health emergency and the resulting economic shutdown, which forced most businesses in West Hollywood to close, reduce service or change their normal operations, have significantly impacted the city.

“The pandemic has led to the sharpest and deepest economic contraction in California’s modern history. It is unclear how long these health orders will continue in one way or another and how great the economic ramifications of this public health emergency will be,” the report read.

Mayor Pro Tempore Lauren Meister underscored how the measures are rseally intended to support small businesses. She said that longer term, the measures would align with the economic needs study the council directed staff to undertake several months ago.

“The task force is more long term … looking ahead, how do we deal with our economic climate and diversity in our businesses,” she said. “The round table is supposed to be more nimble to work on what we can immediately do.”

“We can’t ever make these moves without letting our larger partners in on what we’re trying to do and give them some opportunity to get some skin in the game,” he said. “If they want to put in more, I think that would be great. If they want to put in less, I think we just need to take it and start asking them to help produce success here.”