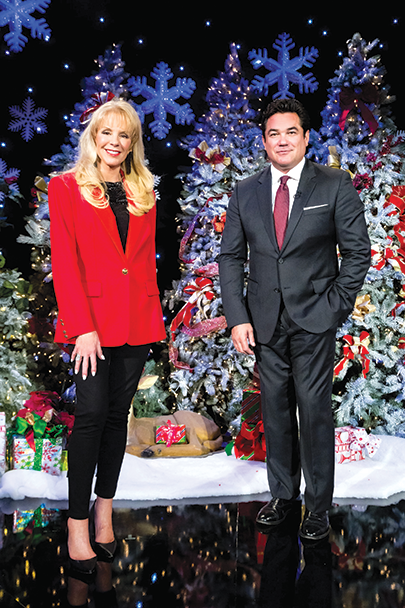 Laura McKenzie and Dean Cain will host the annual competition to crown the kings and queens of caroling. (photo courtesy of “The Christmas Caroler Challenge”)

“The Christmas Caroler Challenge” returns for a three-episode Christmas caroling competition on Fridays, Dec. 11, 18 and 25, from 8 to 10 p.m., on the CW.

Hosted by Dean Cain and Laura McKenzie and produced by Associated Television International, the series will feature 10 extraordinary caroling groups. Each will present stylized virtuoso performances based on classic Christmas music. Celebrities Brandon Rogers, Mikalah Gordon and Garry Gary Beers will judge the competition, with several caroling groups being eliminated in each episode. The finals will be held on Dec. 25, culminating with the announcement of the grand prize winner.

The 10 groups competing include Raise, the Accidentals, the Sugarplums, Jolly Holidays, Jingle 5, Newfangled Four, Yuletones, Decorations, Snow Problems and Four Calling Birds. The show will also include special performances by the celebrity judges with Ashen Moon and the Third Marine Aircraft Wing Band, Voices In Flight.

Out with the old, in with the new in WeHo