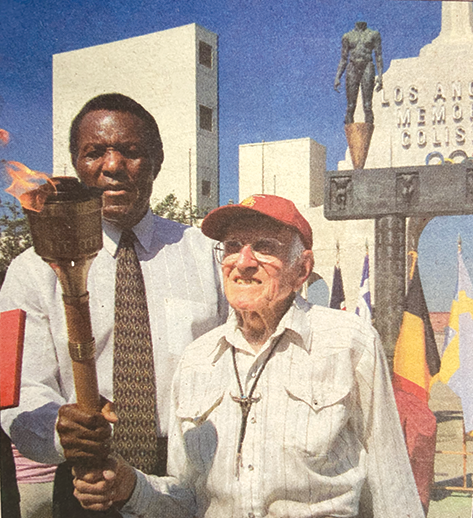 Olympic greats Rafer Johnson, left, and Louis Zamperini came together in this photograph in the Aug. 14, 2008, issue of the Park Labrea News and Beverly Press during a goodwill ceremony at the Los Angeles Memorial Coliseum for athletes competing that year in the Olympic Games in Beijing, China. Johnson, who died on Dec. 2 at the age of 86, was a standout athlete at UCLA and later broke records in track and field and won a gold medal in the decathlon in the 1960 Olympic Games in Rome. At the 2008 ceremony, Johnson returned to the site where he famously lit the Olympic torch to start the 1984 Olympic Games in Los Angeles. In addition to sports, he was well-known for appearances in movies and television. Also, along with football star Rosey Grier and others, Johnson helped subdue Sirhan Sirhan, who assassinated presidential candidate and U.S. Sen. Robert F. Kennedy at the Ambassador Hotel in 1968. Johnson is remembered as an exceptional athlete, humanitarian and ambassador for the Olympics and the city of Los Angeles. In the accompanying article, he stressed the importance of sports in youth development and the impact it has on success later in life.