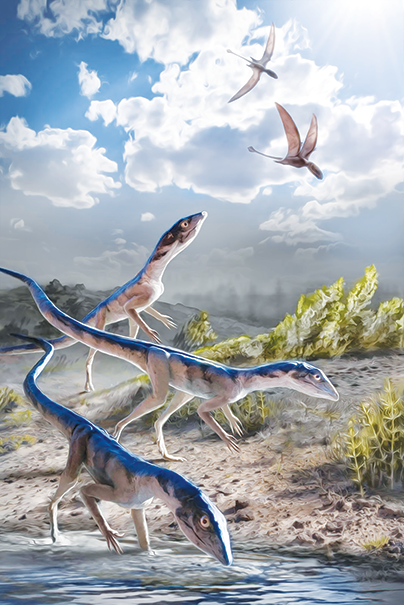 In a paper published Dec. 9 in Nature, Natural History Museum of Los Angeles County scientist Nathan Smith, associate curator in the Dinosaur Institute, was among a team of authors who wrote they had found a missing link in the evolutionary history of pterosaurs.

Flying reptiles called pterosaurs flew over the heads of dinosaurs for more than 150 million years, becoming the first vertebrates (back-boned animals) to take to the air. However, the specifics of how these unique animals accomplished this feat, and from where they evolved, has remained a mystery.

Smith co-authored the article while working with an international team of scientists who appear to have cracked the paleontological mystery of the origin and early evolution of pterosaurs, a topic of great scientific interest since the discovery of the first pterosaur fossils in the second half of the 1700s.

“‘Where did pterosaurs come from?’ is one of the most outstanding questions in reptile evolution; we think we now have an answer,” said co-author Sterling Nesbitt of Virginia Tech.

The newly discovered evolutionary relationships create a new paradigm for understanding the origin of pterosaurs, and provide a completely new framework for the study of the origin of these animals and their flight capabilities.

The authors introduce strong evidence that the closest relatives of pterosaurs are a poorly known group of ‘dinosaur precursors’ called lagerpetids, which lived across the ancient supercontinent Pangea during much of the Triassic Period, from about 237 to 210 million years ago. Lagerpetid skeletal parts, including skulls, forelimbs, vertebrae, have been found in Brazil, Argentina, Madagascar and the United States, with key fossils utilized in the study coming from a collaborative field project in Ghost Ranch, New Mexico, involving NHMLAC’s Dinosaur Institute.

“Late Triassic fossils have been collected from Ghost Ranch for over 100 years. But more recently, discoveries of lagerpetids like Dromomeron and early dinosaurs such as Tawa have ignited a mini-renaissance in our understanding of dinosaur and pterosaur origins and early evolution,” Smith said.

The resulting reconstruction shows that the brains and inner ears of pterosaurs and lagerpetids are similar, suggesting that some of the specialization in pterosaur sensory systems evolved prior to flight.

“This study is a result of an international effort applying both traditional and cutting-edge techniques. This is an example of how modern science can shed light on long standing questions that haunted paleontologists during more than a century,” said co-author Martín Ezcurra of Museo Argentino de Ciencias Naturales, Buenos Aires, Argentina.

“When I first saw a lower jaw with tricuspid teeth preserved alongside fossils of dinosaurs and the Brazilian lagerpetid Ixalerpeton, I thought that we had discovered the oldest pterosaur. Later, other lagerpetids with ‘pterosaur traits’ started appearing in the US, Madagascar, and Argentina, revealing the close relation between these two groups. In the end, the jaw belonged to Ixalerpeton itself, and helped us unveil the origins of the flying reptiles,” said co-author Max  Langer of Universidade de São Paulo, Ribeirão Preto, Brazil.

“These new discoveries and insights into lagerpetid anatomy have given us a bit of an ‘evolutionary roadmap’ for understanding where pterosaurs came from,” Smith said. “It’s a great example of how international and multidisciplinary collaboration can create paradigm shifts in paleontology. And while these new fossils help close the gap on pterosaur origins, it’s clear that there are more discoveries waiting to be made in the Triassic that will continue to shed light on these incredible animals.”