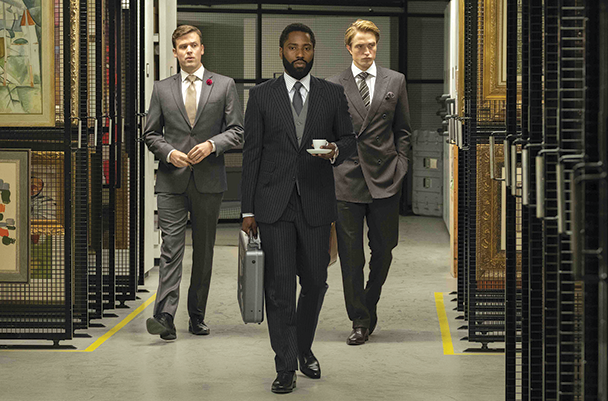 In a normal year, the latest Christopher Nolan flick would dominate the summer movie season, featuring superheroes, heady sci-fi or trippy neo-noir. “Tenet” – finally available digitally after a terrible attempt at a film tirade – attacks all those options, never reaching the high concept the auteur desires.

On brand with other Nolan romps, “Tenet” is impervious to spoilers. In short, it tackles time travel, but that’s hardly new territory for this writer-director who lavishes in temporal reality across most of his directorial work: the linear/nonlinear “Memento,” “Batman Begins’” flashbacks in flashbacks, and several timelines weeks apart in “Dunkirk,” a World War II film.

Unfortunately, “Tenet” offers little new material, instead heavily borrowing from a pair of Nolan’s previous flicks. First, “Inception. What the four-time Oscar winner did for dreams (the whole dream-within-a-dream-within-in-a-dream heist), “Tenet” attempts with time travel, or “inversion,” which occurs when objects and people move backwards.

It might sound complicated, but an unnamed CIA agent (John David Washington, credited as “the Protagonist” here), who joins the secretive Tenet organization to subdue an elusive threat from the future, serves as the everyman learning the ropes alongside unknowing spectators.

A decade ago, Nolan’s dream heister permitted a degree of ambiguity while memorably appropriating Freudian ideas on insane set pieces. The latter remains true in “Tenet,” though the latest film takes exposition too far, over explaining every little mystery (no spinning totem questioning if the hero ever woke up).

Nolan’s second bit of self-plagiarism hales from “Interstellar:” someone or something from somewhere or sometime is behind inversion. And much like “Interstellar,” the revelation amounts to very little, a twist with no stakes beyond a superficial reference to contemporary anxieties.

OK, “Tenet” also poaches another Nolan story: his own “Dark Knight” trilogy. Washington’s protagonist in “Tenet” enjoys some top-tier spy tech, moves through the story like the world’s greatest detective and hones a special ability as a non-powered man traversing a changing world ripe with a new kind of villainy.

Too bad villainous Sator (Kenneth Branagh reprising a Russian accent), an arms dealer at the center of a possible Third World War (yawn), pales in comparison to other Nolan inventions and adaptations. Sator is a caricature of villainy, not empathetic, charming, intriguing or anything else – just bland. His own wife Kat (Elizabeth Debicki) describes why she can’t divorce him with one of many cliché lines that pepper the screenplay: “If he can’t have it, no one can.”

As usual, Nolan really doesn’t care about female characters, briefly using a scientist (Clémence Poésy, who should’ve been the agent’s M, appearing in more than one scene), a misused character (Dimple Kapadia, as an arms dealer and Tenet operative) and Debicki as a brooding damsel for most of the film.

Normally, mid-level Nolan still ascends some directors’ best contribution. Alas, “Tenet” enjoys no such grace: no points for effort or defenses in support of some good ideas. It’s a mess trying so hard to be smart.

That worked for over 20 years, but this time, a Michael Bay aesthetic overpowers anything thoughtful, especially come a literally explosive climax as mind-numbing as any “Transformers” finale. What’s more, the one clever moment feels like “Doctor Strange” theft (you’ll know it when you see it).

Whelp, 2020 sucks, and it found a way to take down the mighty Chris Nolan, who even decided to throw shade at long-time distributing partner Warner Bros. regarding its decision to put all 2021 films on HBO Max, which Nolan then called the worst streaming service (clearly he hasn’t tried out Peacock or scrolled a couple pages into Prime’s genre tabs). Hopefully, “Tenet” and his ire are just part of the 2020 fever dream. If not, thanks for “The Dark Knight.”