The Wallis presents ‘Estella Scrooge’ for the holidays 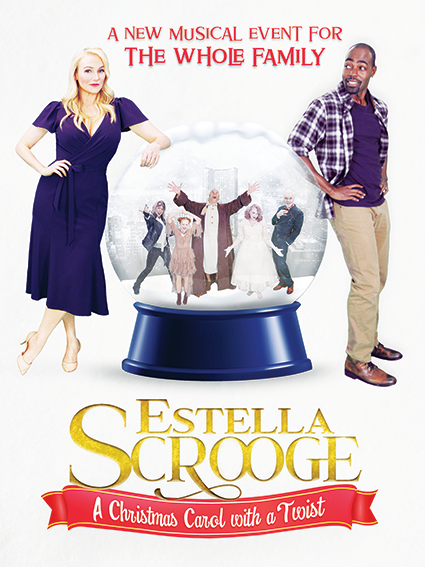 Betsy Wolfe (Estella Scrooge) and Danny Burstein (Ebenezer) star in the world premiere of “Estella Scrooge: A Christmas Carol with a Twist.” (photo courtesy of The Wallis)

Just in time for the holidays, the Wallis Annenberg Center for Performing Arts will bring audiences a magical musical, created with new cutting-edge technology, that is sure to become a new holiday tradition – the world premiere of “Estella Scrooge: A Christmas Carol with a Twist.”

The production features a cast of 24 award-winning Broadway notables, and is the creation of John Caird, (the Tony and Olivier Award-winning director of “Les Misérables”), and Tony Award nominee Paul Gordon (“Pride and Prejudice.”) Caird and Gordon also paired to create “Daddy Long Legs,” which played at numerous regional theaters throughout the country and in four countries before enjoying a successful off-Broadway run.

“I’m so happy to bring this new musical to life in the midst of these mad and maddening times. The creative team nimbly learned new techniques to bring the actors and their characters together. It’s wonderful to provide employment for the theatre community while we enliven the classic ‘Christmas Carol’ story, refashioned with a new twist for today. At a time of great conflict and hardship, I hope we can shine a little ray of optimism into the surrounding darkness,” Caird said.

“Estella Scrooge” is the first digital theater piece filmed entirely during the pandemic utilizing cutting-edge technology. The fully-realized production, a dazzlingly cinematic musical theater adventure, was filmed using tracked green-screen techniques, with 3-D surreal digital environments created in post-production and merged with the actors’ actual footage to bring the story to life in a brand-new way.

“Created during a pandemic world, Estella Scrooge’s modern reimagining of a classic story, with a remarkable cast and direction from one of the theater world’s great directors, speaks to the world we are now, but offers hope at the end,” said Paul Crewes, artistic director of The Wallis.

The story follows Estella Scrooge, a modern-day Wall Street tycoon with a penchant for foreclosing. A hotelier in her hometown of Pickwick, Ohio, has defaulted on his mortgage and Estella fancies the idea of lowering the boom personally. Arriving at Harthouse on Christmas Eve, Estella discovers that the defaulting party is her childhood friend Pip Nickleby. A good and generous soul, Pip has transformed the property into a refuge for the sick, dispossessed and homeless. A freak snowstorm forces Estella to take refuge and that night, just as it happened to her ancestor Ebenezer, she is haunted by three visitations.

“This piece was a joy to create, from the first beat of the idea to the culmination of the film,” Gordon said. “Discovering how these Dickensian characters (from different novels) would interact together and tell a cohesive story with a distinct musical voice was both a challenge and a thrill. I believe in finding new ways of sharing the magic of musical theater with the world and now it’s more important than ever to escape for a few hours with a message of love and hope. I’m proud to be part of this creative team and to bring our community together in a responsible way during these challenging times.”

The show will stream from Monday, Dec. 21, through Sunday, Jan. 3. Tickets are $29.99 for 72-hour viewing or $44.99 for a premium theatre experience, which includes unlimited viewings, a download of the CD and behind-the-scenes footage. For information, visit thewallis.org/scrooge.