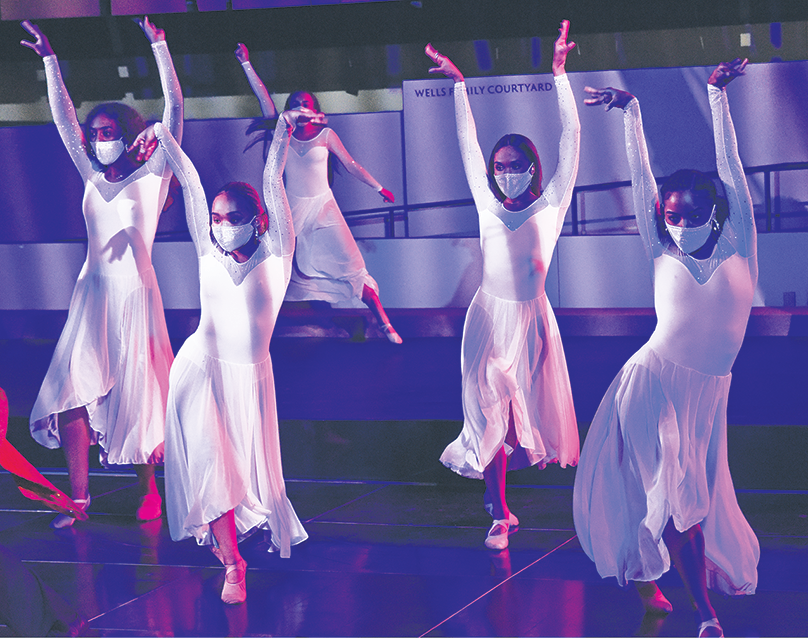 Dancers from the Debbie Allen Dance Academy perform at The Wallis’ virtual benefit. (photo by Kevin Parry/courtesy of The Wallis)

For almost two decades before the Wallis Annenberg Center for the Performing Arts welcomed its first audience in the 500-seat Bram Goldsmith Theater, a contingent of passionate residents worked to realize the dream of creating a cultural arts destination in Beverly Hills.

The Beverly Hills Cultural Center Foundation, founded in 1994, worked to formalize a plan to create a performing arts center at the historic Beverly Hills Post Office.

Now under the leadership of Executive Director and CEO Rachel Fine and Artistic Director Paul Crewes, The Wallis, which opened in 2013, is dedicated to eclectic programming showcasing diverse genres within the performing arts, including music, dance and theater.

To mark the 25th anniversary of its founding, The Wallis will celebrate with a virtual gala, “DreamBuilders: From Post Office to Box Office,” taking place tonight, Dec. 3, at 6:30 p.m.

“All three of them dream very, very big [and] we very intentionally chose DreamBuilders,” Fine said. “They all really love the city and community in which they live.”

For Rosenzweig, who died in May, helping bring The Wallis to life was a major milestone in his life, according to his wife, Judy Henning.

“He had such a strong sense of community. That The Wallis actually happened is just a testament to that belief,” Henning said. “He was so excited to go there. Every time he went there, he was happy to be there. He didn’t want anyone to criticize anything about it. He just wanted to be there and share the excitement of the theater.”

As part of the virtual fundraiser, which is being hosted by Wallis board members Debbie Allen and Nigel Lythgoe, with Wallis Annenberg serving as honorary chair, there will be multiple performances by renowned artists, including Grammy Award-winning musician Adam Levine, Academy Award-winning actor Jeremy Irons and jazz legend Patrice Rushen.

“It has become the centerpiece of the cultural activities in the city and has converted us from just being another retail center into being a really remarkable place where cultural activities are taking place in the middle of our community and benefiting everyone,” said Selwyn, who became the inaugural chair of the Beverly Hills Cultural Center Foundation, which also included Carolyn Ahmanson, Kermin Bericher and Rosenzweig.

Reynolds recalled, as vice mayor, advocating that the city purchase the post office.

“I said, ‘We can’t let this go. This is a national treasure and it’s a historic treasure of our city,’” she said.

Together with Reynolds, the five worked in concert to encourage the city to purchase the historic Beverly Hills Post Office and transform it into a cultural center for the city. Once operations had ceased at U.S. Postal facilities, municipalities were given the first option to purchase.

Thanks largely to the tenacity of Reynolds, the city’s first three-time mayor, Beverly Hills ultimately procured the building from the U.S. Postal Service for $2.25 million as part of its development deal.

“We worked hard over the past 25 years to make this a reality and it’s really very thrilling,” she said.

The 70,000-square-foot facility has continued to evolve as a dynamic cultural hub and community resource, including its Space for Arts Education.

Originally, the group envisioned having a 500-seat theater in the post office’s onetime sorting room – today, the 150-seat Lovelace Theater. However, multiple architects said it was impossible and that a new structure would be needed to accommodate that dream, which significantly raised anticipated development costs.

Selwyn recalled how following an initial contribution from longtime residents Anne and Kirk Douglas, other people began to support the project, including Fred Hayman and Bram Goldsmith, with Annenberg ultimately making a $25 million gift which allowed the project to be built.

“I just feel very fortunate that I was able to help in developing the whole Wallis project,” Selwyn said.

In addition to having a “virtual red carpet” where honorees and VIPs posed for pictures before the event, a bevy of performances were earlier filmed at The Wallis in compliance with county guidelines on COVID-19 safety and subsequently edited into tonight’s program.

The proceeds from the event go to benefit the Hope @ The Wallis Resiliency Fund, a source of philanthropic support for The Wallis during its unanticipated and lengthy closure due to the global pandemic.