Subway work continues at many sites along route 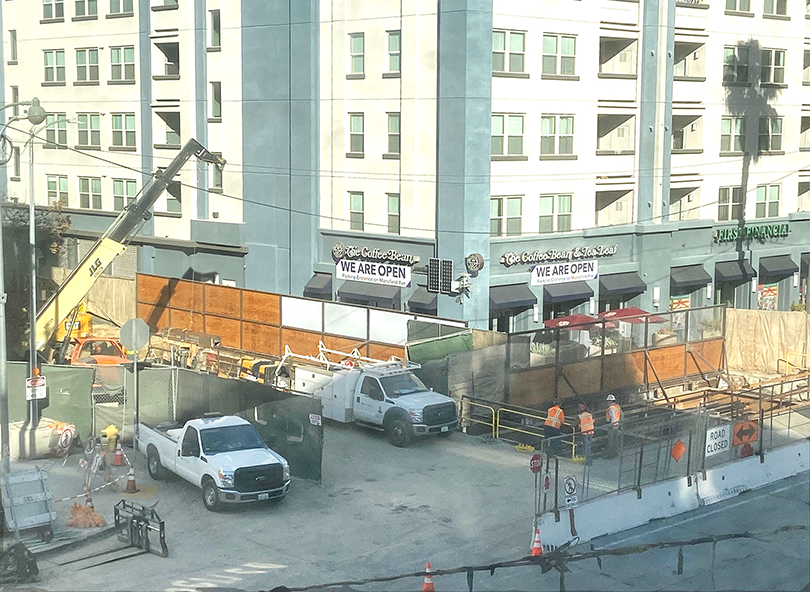 Metro has announced that the next lunchtime webinar for Purple Line Extension subway construction will be held on Wednesday, Jan. 13, from noon to 1 p.m., via Zoom.

Work continues at many locations along the route underneath Wilshire Boulevard. Metro recently announced that a K-rail enclosure has been implemented at Wilshire and Plymouth boulevards and will be in place for one year. Wilshire Boulevard will be reduced to two lanes in each direction between Crenshaw Boulevard and Muirfield Road. Left turns will be restricted from westbound Wilshire to southbound Plymouth Boulevard. Work will occur 24 hours in the enclosure.

Construction is also occurring five blocks west at Wilshire/Rimpau. A K-rail work zone on the west side of the intersection of Wilshire and Rimpau boulevards will be in place through next May. Wilshire Boulevard has been reduced to two lanes in each direction between June Street and Muirfield Road. Concrete and material deliveries are anticipated to continue at the site in December. Wilshire Boulevard may be intermittently reduced to a single lane in each direction.

Hauling, deliveries and tunneling support is ongoing near Wilshire/La Brea and Wilshire/Sycamore. Orange Drive remains closed north of Wilshire Boulevard. Access to businesses in the area has been maintained.

Through Saturday, Feb. 27, Wilshire Boulevard will be reduced to two lanes in each direction between Detroit and June streets. Intermittent lane closures on Wilshire Boulevard and side streets between Highland Avenue and Detroit Street may also be in place from 6 a.m. to 4 p.m., Monday through Friday.

A K-Rail work zone has been installed at the southwest corner of Wilshire Boulevard and Fairfax Avenue, where concrete and material deliveries are occurring. Wilshire Boulevard will be reduced to two lanes in each direction between San Diego Way and Spaulding Avenue through next August.

A K-rail enclosure in the center lanes of the intersection of Wilshire/San Vicente is anticipated to be in place through the end of December. The enclosure supports ongoing tunnel and mitigation work underneath Wilshire Boulevard. All left turns are restricted.

Subway station construction, material deliveries, instrumentation and concrete pouring also continues at Wilshire/La Cienega. Eastbound Wilshire Boulevard may be intermittently reduced to one lane from 7 a.m. to 4 p.m., and 8 p.m. to 7 a.m., as needed. The lane reduction may also be used on Saturdays from 7 a.m. to 4 p.m. Gale Drive will also be intermittently closed at Wilshire Boulevard to support construction.

Excavation continues at Wilshire/Rodeo, where crews are anticipated to reach a final depth of 100 feet during the first quarter of 2021.