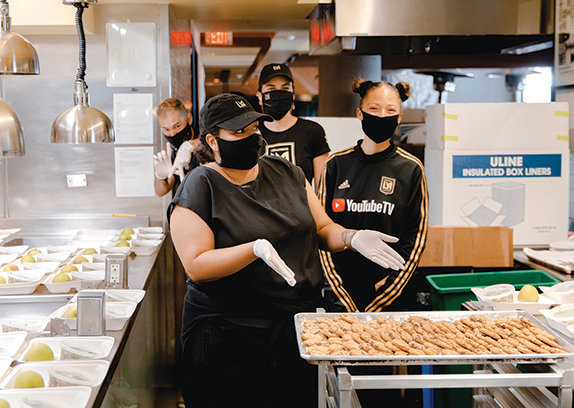 Aida Morrow, LAFC’s director of community relations, front, and other club employees made an effort to give back to Los Angeles in 2020. (photo courtesy of LAFC)

Los Angeles Football Club turned the multiple crises of 2020 into opportunities to help.

With home games off the table – the season was shut down in March before play resumed in a bubble in Orlando over the summer – Banc of California Stadium became a distribution point for those in need of food.

The LAFC Foundation formed the Black & Gold Community Fund, which Aida Morrow, LAFC’s director of community relations, said “had an eye toward understanding and figuring out ways to fill in the gaps where possible.” That included supplying personal protective equipment, financial assistance and food to those in need.

“Some of the greatest accomplishments that the fund has had were providing some of the food drives that helped with the food disparities that were going on and even broadened in the pandemic,” Morrow said.

LAFC partnered with Sustainable Economic Enterprises of Los Angeles, or SEE-LA, to purchase produce from farmers who were unable to sell their goods and give that food to families in need, said Stephen Gutwillig, executive director of SEE-LA.

“At the beginning of the pandemic, SEE-LA found itself at the intersection of a terrifying increase in food insecurity in the community and a grim toll of farm insecurity as the family farms in our network faced plummeting sales due to restaurant closures and the shuttering of many farmers markets that they relied upon,” he said. “We pivoted and started raising money to bulk purchase produce directly from those farms in our network to provide farm boxes to families facing food insecurity, particularly in south Los Angeles.”

The drive-through distribution at Exposition Park – the “front porch” of Banc of California Stadium – produced “well over 10,000 farm boxes,” each of which contained 25 pounds of seasonal vegetables, potatoes, eggs, strawberries and oranges, enough “to feed a small family of four or five for about a week,” Gutwillig said.

“This has the dual effect of helping feed people who need help in the community and saving untold numbers of farm worker jobs and tons of fresh produce that was likely headed for composting,” he added.

After the killing of George Floyd on May 25 and the push for social justice that followed, LAFC partnered with More Than a Vote, a group of Black athletes and entertainers including Olympic sprinter Allyson Felix, NFL player Patrick Mahomes and Los Angeles Laker LeBron James, to use Banc of California Stadium as an early voting center.

“It was important for us to stand up and express the importance of voting as a whole. Especially in an election that was so important to so many people,” Morrow said.

Morrow added that the use of the stadium as a voting center allowed LAFC to connect with its fans when they had “not been inside [the stadium] for quite some time due to the pandemic.”

“It was a moment for them to relive why LAFC had such a positive impact for them as fans both on and off the pitch, and for us, it was an opportunity for our local community members who maybe have not seen the stadium to come inside and exercise their voice, to see the pitch and the inside of the stadium,” Morrow said.

Morrow added that LAFC plans to continue making a positive impact in the community into 2021 and beyond.

“Overall, though this pandemic really shows how our community can galvanize and support each other, it won’t end just because the pandemic is hopefully coming to an end. This is something that is really a pillar of our club, being a force for good is something that we’re really focused on doing, and we look forward to continuing to support our community,” Morrow said.

Gutwillig added that SEE-LA has been very appreciative of LAFC’s help, calling the team “extraordinary partners, both financially generous and thoughtful collaborators.”

“It was just really meaningful to have their support and partnership, given the scale of the public health catastrophe and the needs in the community when LAFC itself was facing such uncertainty about the future of professional soccer. It was really moving,” he said.