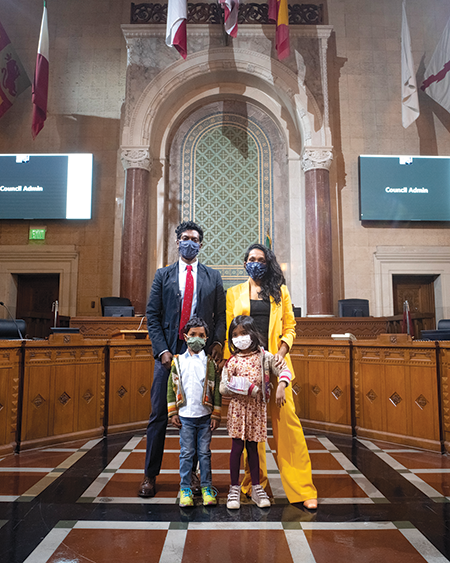 Councilwoman Nithya Raman, 4th District, was sworn in on Dec. 15 in a virtual ceremony led by City Clerk Holly Wolcott in which all council members of even-numbered districts took the oath of office.

Raman was joined by the winning incumbents in the Nov. 3 election and the other newcomer – Councilman Mark Ridley Thomas, 10th District. Raman and Ridley-Thomas then participated in their first council meeting, which happened to be the last of the year before a City Council recess until Jan. 12.

Raman outlined her work addressing homelessness and said she hopes to continue progress on the issue on the City Council. She introduced two motions pertaining to homelessness that will be further considered at a future council meeting, including one to shift the focus of how the Los Angeles Homeless Services Authority provides services, and another to create drop-in centers for people experiencing homelessness where they can use restrooms and take showers, and receive services that will help improve their lives and put them on a path toward self-sustainability.

“I believe so powerfully there is nowhere else on Earth like Los Angeles. It’s so thrilling, so magnificent, with so much stunning natural and human diversity. It’s a place where people can come from anywhere in the world and feel welcomed and find community and build their dreams,” Raman said. “And yet, just as vast as this city’s capacity for joy has been, so too has been its tolerance for suffering. Economic forces are pushing people out of their homes, out of the city and onto the streets. Not just newcomers [but] families who have been here for many decades, in particular working families, so many Black and brown families, families of color, who are facing pressures that amount to a form of racial banishment.”

Raman also cited challenges presented by the pandemic and adverse impacts to the environment.

“We’re living the effects of climate emergency, as well, worsening drought, fires and air quality, which are also falling hardest on L.A.’s low-income communities of color. And today, we face a health and economic catastrophe that has brought so much pain on our community, and simultaneously, it’s crippled our city’s capacity to respond, with much more pain still to come,” she said. “I feel the weight of this moment so heavily. It hangs on my heart. The suffering being felt all over this city right now is with me every day. But that’s also why I’m so grateful to be in this seat, on one of the most powerful city legislative bodies in the country. It is such a joy, such an overwhelming privilege, to be in a position to help people in this moment, to create those needed policies, to create networks of support, to govern in coalition with all of you.”

Raman’s motion for changing the way LAHSA provides care seeks to alleviate a system that is currently “largely reactive and scattershot” with one that is more directly focused on individual people experiencing homelessness. Instead of scenarios in which city sanitation workers and police officers are sent to encampments, she envisions a system in which the same case workers visit the same individuals or encampments on a regular basis to ensure people are receiving services and their lives are improving. Case workers would know clients by name and would be responsible for their progress, she said. 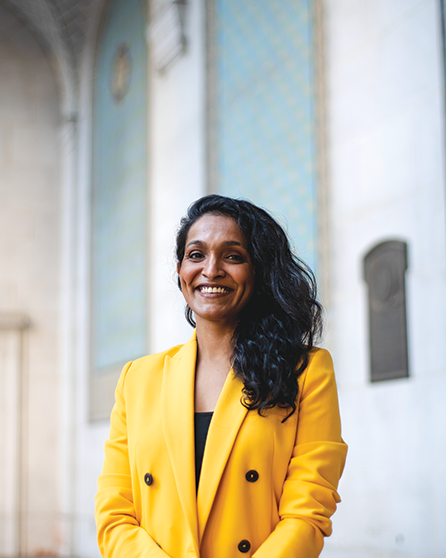 Councilwoman Nithya Raman said combatting homelessness is one of her top priorities. (photo courtesy of the 4th District office)

The other motion asks the city administrative officer and other city departments to identify potential sites for a drop-in center in the 4th District for homeless individuals, similar to places created by nonprofits in other areas of the city.

“In many parts of Los Angeles, there is not a single place where an unhoused person can use a restroom, take a shower, store their belongings or speak to a social worker who can help them secure shelter or medical treatment,” Raman said. “Nonprofits in Los Angeles that operate low-barrier drop-in centers such as PATH, Volunteers of America and SELAH  have successfully used hygiene, storage and caseworker services to direct many of their guests into stable housing and treatment. The city of L.A. has recognized the value of this model as well, funding centers in North Hollywood, San Pedro and South Los Angeles, but not in District 4. This critical link in the city’s homelessness response system must be filled.”

Ridley-Thomas also expressed his intentions to address homelessness, and was appointed by Council President Nury Martinez, 6th District, as chair of the council’s Homelessness and Poverty Committee. He has decades of experience in public service, having served on the City Council previously representing the 8th District for three terms beginning in 1991, later in the state Legislature and most recently on the Los Angeles County Board of Supervisors.

“I want to thank Council President Martinez for this appointment. I am honored to continue the important work of addressing the moral crisis of our time – homelessness – at the city level. Los Angeles is the epicenter of homelessness, and with the crisis within a crisis of COVID-19, its resulting economic downturn and persisting racial inequities, we must do more, and do it with utmost urgency so that we don’t bear witness to even more devastating trends,” Ridley-Thomas said. “My objective as a member of the City Council and as chair of the committee is to help get us to a place where we no longer talk about homelessness as a challenge that can be addressed a few projects and policies at a time. We must carefully rethink our response and create a comprehensive framework for establishing a ‘right to housing’ in order to bestow on each and every Angeleno the dignity and well-being that we all deserve. I look forward to working with my fellow committee members, who I am sure share these sentiments as well. The status quo is simply unacceptable.”