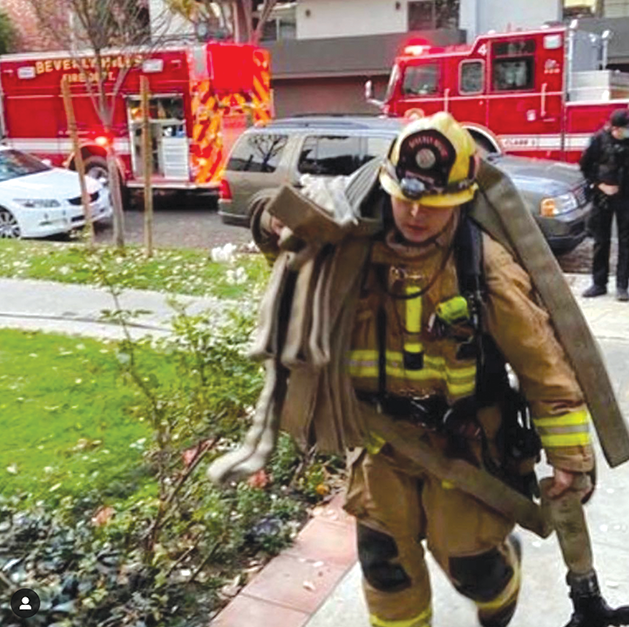 Firefighters prevented a blaze in an apartment on Reeves Drive from spreading to other units. (photo courtesy of Lili Bosse)

The Beverly Hills Fire Department quickly extinguished a small fire on Dec. 26 that started in an apartment in the 200 block of South Reeves Drive.

BHFD personnel received a call from a resident of the building at 4:31 p.m. after a smoke alarm was activated in one of the ground-floor units, Deputy Fire Chief Joseph Matsch said. Firefighters found smoke in the unit and a small fire on a dresser and wall. The flames were extinguished in minutes, but firefighters ventilated the walls and checked to ensure there were no further flare-ups, he said. Firefighting operations concluded at 5:23 p.m. Damage from the flames was contained to a single room; however there was smoke damage throughout the apartment.

Matsch said the unit was unoccupied when firefighters arrived. They found evidence that a candle had been left burning unattended on the dresser, potentially causing the fire, although the exact cause remains under investigation, he added.

Matsch said the fire illustrates the danger of leaving an open flame unattended, including candles. He credited the smoke alarm and a quick response from the fire department – which arrived within approximately two minutes of receiving the call – with preventing the situation from being much worse.

“Beverly Hills Fire has amazing response times so we are able to keep most fires from becoming bigger problems,” Matsch said. “Every minute of time, a fire grows exponentially. The smoke detector activated and a lady called. If this had been a 15 minute response time, the situation would have been much different.”

Matsch said the blaze was determined to be accidental and there was no criminal activity. He had no further information about the occupant of the unit. The incident would be referred to the city’s building and safety and code enforcement departments for follow-up if necessary, he added.

Councilwoman Lili Bosse posted a photo from the fire scene on social media and thanked firefighters for preventing a larger tragedy.

“Grateful to our Beverly Hills firefighters who were there to help residents on Reeves Drive,” Bosse said. “Grateful for them today, and every day.”