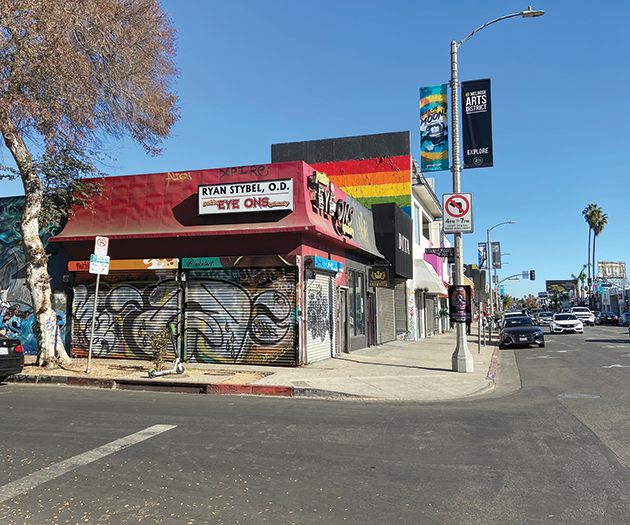 The shooting at Melrose and Stanley avenues has prompted concerns about public safety in the shopping district. (photo by Edwin Folven)

Homicide investigators are continuing their search for a male suspect who shot and killed one man and injured another on Dec. 15 in the Melrose Avenue shopping district. The Los Angeles County Department of Medical Examiner-Coroner identified the deceased man as Devonte Clepper, 28. The victim is from Ohio, but his city of residence remains unknown, said Detective Sean Kinchla, with the Los Angeles Police Department’s West Bureau Homicide Unit. Police are searching for security camera footage that may lead them to the lone male gunman, he said.

The shooting occurred shortly before 1 p.m. near the intersection of Melrose and Stanley avenues. Citizens flagged down a patrol car and officers found the two male victims suffering from gunshot wounds near the corner. Paramedics pronounced Clepper dead at the scene. No further information was available about the injured man, other than he was expected to survive.

Police have not released information about a motive. The murder has caused much concern about crime in the area, particularly during the holidays. The shooting occurred along a stretch of Melrose Avenue where numerous stores were open.

Peter Nichols, co-founder of the Melrose Action Neighborhood Watch, said many people he had spoken to about the murder were scared. It was the latest serious crime to occur in an area already reeling from social unrest and looting in May, Nichols added. Another shooting in July believed to be gang-related claimed a man’s life in the 300 block of North La Brea Avenue, just southeast of the shopping district.

“I can tell you my neighbors are stunned, given the level of violence the area has experienced in the past six to 10 months,” Nichols said. “When you put that on top of the looting and the burning and all of that, I can tell you there has been a mass exodus of people moving from here. The neighbors, hands down, want more security. This is a prime example of what people fear the worst.”

Los Angeles City Councilman Paul Koretz said he is concerned about the shooting and will be working to ensure there are adequate police resources to maintain public safety.

“The murder on Melrose was tragic and it is a painful reality that this happened on our streets. We live in tumultuous times with crime on the rise throughout the city. However, we are working closely with our law enforcement partners to make sure that the 5th District maintains high levels of deployment and support,” Koretz said. “Daily, I make sure that our LAPD officers know that I am with them and behind them. We have the most diverse police department in the region, with some of the most progressive reforms seen in the country. As hate and violent crimes are on the rise, the community should know that public safety has and will continue to be my top priority.”

Capt. Shannon Paulson, commanding officer of the LAPD’s Wilshire Division, said she could not comment on the ongoing investigation, but said officers understand the fear that exists and are trying to allay concerns. Additional patrols have been deployed when resources are available, Paulson said.

The suspect, only described by witnesses as a Black man, was last seen fleeing on foot, police said. Anyone with information about the shooting is urged to call West Bureau Homicide Detectives at (213)382-9470. During weekends and off-hours, call the LAPD’s hotline at (877)LAPD247.