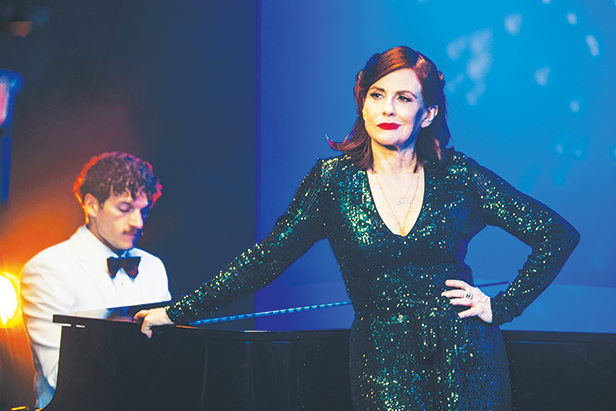 Pasadena Playhouse has unveiled “In Development: Iceboy!” on PlayhouseLive. This work gives an insiders’ look at the unproduced musical by Mark Hollmann, Erin Quinn Purcell and Jay Reiss.

Join Megan Mullally, Nick Offerman, Adam DeVine and Laura Bell Bundy as they perform four new songs and give a rare early look at “Iceboy!” The preview is directed by Kevin Chamberlain with musical accompaniment by Jesse Vargas.

From the co-creators of the Broadway hits “The 25th Annual Putnam County Spelling Bee” and “Urinetown: The Musical,” “Iceboy!” tells the absolutely untrue story of a 10,000-year-old neanderthal who’s discovered frozen in the Arctic, brought to New York and adopted by Vera Vimm (Mullally), the biggest Broadway star of 1938. But once thawed, Iceboy (DeVine) becomes an acting sensation whose talents threaten to upstage the once mighty Vera.

Emmy Award-winning actor and musician Mullally has appeared on Broadway in revivals of “Grease,” “How to Succeed in Business Without Really Trying” and Mel Brooks’ “Young Frankenstein.” Her band, Nancy and Beth, will release its second album, “Imaginary Friend” in 2021.

Offerman is an actor, author, humorist and woodworker, best known as the character of Ron Swanson on NBC’s hit comedy series “Parks & Recreation,” as well as Karl Weathers in the acclaimed FX series “Fargo” and co-host and executive producer of NBC’s “Making It.”

Devine has become one of the most sought after comedians in the world. His sketch-comedy group, Mail Order Comedy, has headlined shows all over the nation. Most recently, he launched a podcast, “This is Important.”

Bundy is an actress, recording artist, songwriter, director and producer. She’s appeared in over 100 hundred episodes of television.

The project was made possible in part by the Pasadena Arts and Culture Commission, the city of Pasadena Cultural Affairs Division and the Playhouse Village Association.

“In Development: Iceboy!” is available to view for free.