Out with the old, in with the new in WeHo 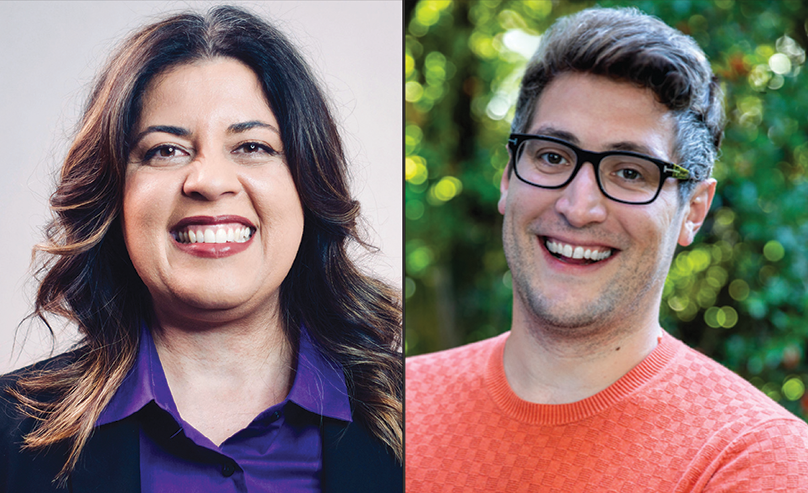 The Dec. 7 West Hollywood City Council meeting was a changing of the guard, as Councilman John Erickson and Councilwoman Sepi Shyne took their oaths of office and long-serving Councilmen John Duran and John Heilman said their goodbyes.

Duran, who served on the council for five terms, and Heilman, who served all but a few months since the city’s founding in 1984, praised city staff, their colleagues on the council, city commissioners and residents when delivering their farewell addresses.

“It’s really been one of the greatest chapters of my life to serve this community for the past 20 years,” Duran said.

“I love this city so much. It has been an honor to be a part of it, and I will continue to serve it, just in a different capacity,” Heilman said.

The outgoing council members also offered advice and perspective to Shyne and Erickson as they prepared to assume their roles.

“I hope you find your service half as rewarding as I have. I’m sure you’re going to enjoy it, and I look forward to seeing the improvements that you’re going to make for our community,” Heilman said.

Duran encouraged his successors to rely on city staff and to field input from community members, but to ultimately make their own decisions.

“Listen to them carefully, and then do what you think is right, even if it’s not popular. In a community that’s often passionate, divided and polarized, if you try to evaluate issues based upon the heat and the energy in the room, you’ll end up satisfying no one and losing people on both sides of any issue. Stick to your values, bring people along. Patience is truly a virtue, and you’ll have many years to put patience into practice,” Duran said.

In their first speeches given as council members, Shyne and Erickson were also full of praise for the city’s residents and staff. Shyne, who noted that with her election, the council will be majority female, spoke not only to her supporters, but all residents. She also highlighted some of her top priorities, including more assistance for local businesses during the pandemic and her plan to create a social justice task force, which was approved later that evening.

“Today’s celebration would not be possible without the amazing residents of West Hollywood, who turned out in record numbers and placed their faith in me to lead this city with a bold vision for the future. For every resident out there whose votes I couldn’t and did not earn, I look forward to representing you as well for the next four years on City Council … I am honored to serve as your council woman, and the work starts tonight,” Shyne said.

Erickson, who worked as a member of city staff, as a council deputy and as a city planning commissioner before his election, noted that while “I didn’t imagine I’d be taking an oath or giving these remarks from my bedroom” due to the pandemic, he was excited to help ease the stresses of the pandemic on West Hollywood residents.

“We will get through this time and come out better, because we discovered just how together we have been throughout this pandemic and how much closer we are as a result. I promise each and every one of you I will work every single day to make your lives better. If you know a little bit about me, you know I don’t make promises I can’t keep. Now, let’s get to work,” Erickson said.