One dead and another injured in Melrose shooting 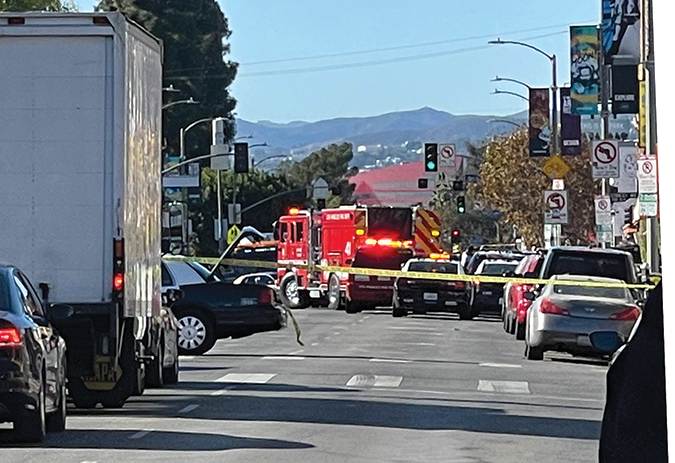 Melrose Avenue remained closed throughout the afternoon as police investigated a homicide at the intersection with Stanley Avenue. (photo courtesy of Peter Nichols)

One man was killed and another injured on Dec. 15 after allegedly being shot by a male suspect in the Melrose Avenue shopping district.

Patrol officers from the Los Angeles Police Department’s Wilshire Division were flagged down by citizens shortly before 1 p.m. and directed to Melrose and Stanley avenues, where they found two men suffering from gunshot wounds. Paramedics arrived and pronounced one of the victims dead at the scene. The second man was taken to a hospital and is expected to survive, said Detective Sean Kinchla, with the LAPD’s West Bureau Homicide Unit.

Police do not know the motive for the shooting, Kinchla added. The two victims were approximately 30 years old. The deceased man’s name was not released pending notification of next of kin.

“We are actively working on the case,” Kinchla said. “We worked late canvassing for video. We are not sure why they were there. There was no event but Melrose Avenue is lined with stores right there.”

The suspect, only described by witnesses as a Black man, was last seen fleeing on foot, police said. Investigators hope the public can provide a tip that will help them solve the case.

Detectives from the West Bureau Homicide Unit – which covers the LAPD’s Hollywood, Olympic, Wilshire, West Los Angeles and Pacific divisions – have experienced an increase in homicides this year, Kinchla said. In 2019, they investigated 18 homicides. This year, there have been 39 murders. He said the numbers are skewed by the Olympic Division, which has reported 18 homicides so far this year. The Wilshire and Hollywood divisions have each had six homicides in 2020, while the Pacific Division has reported five and West Los Angeles Division has reported four murders.

Kinchla said he does not know why there has been an increase, as the motives behind each homicide is different. The high number in the Olympic Division, which includes Koreatown as well as the Pico-Union and Arlington Heights district, may be related to it being a densely-populated urban area, but the exact reasons are unknown, he said.

“We have no idea,” Kinchla added. “In some parts of the city, you will see a trend and you can say it’s attributed to gang violence or something, but with us, our cases are so varied.”

Anyone with information about the shooting at Melrose and Stanley avenues is urged to call West Bureau Homicide Detectives at (213)382-9470. During weekends and off-hours, call the LAPD’s hotline at (877)LAPD247.

DUI checkpoints planned during the holidays