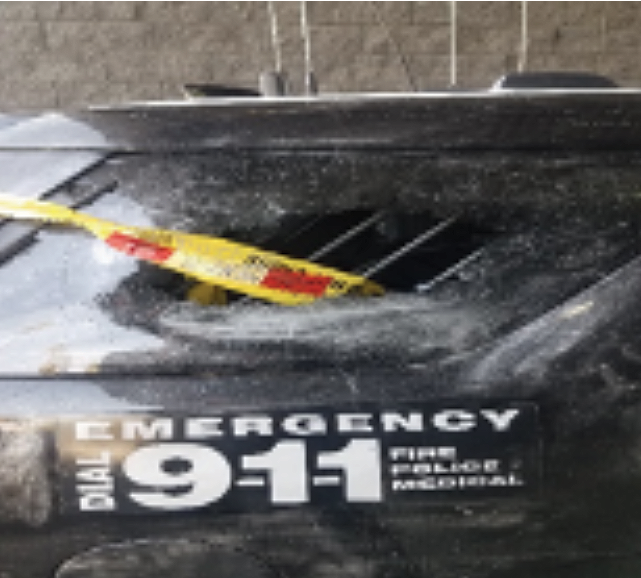 The rear windows of an LAPD patrol car were allegedly smashed by people involved with the street takeover. (photo courtesy of the LAPD)

Police arrested one man and are searching for other people involved in a street takeover in which officers were allegedly assaulted on Dec. 11 at the intersection of Western Avenue and Seventh Street.

The incident involved a spontaneous street takeover of the intersection while drivers in high-performance cars performed stunts. Officers from the Los Angeles Police Department’s Olympic Division arrived at 11 p.m. and their patrol car was immediately surrounded by spectators and other vehicles, police said.

As the officers attempted to leave until backup arrived, some members of the crowd allegedly threw rocks and bottles at the patrol car. The crowd then surrounded the police car and smashed the rear windows, authorities said. They also forced a door open and allegedly attempted to strike the officers.

The officers broadcast a call for additional help. A vehicle involved in the street takeover allegedly intentionally struck the front of the patrol vehicle and fled, police said.

The officers followed that vehicle in a lengthy pursuit that ended in the city of Buena Park. The alleged driver, Myron Thomas, 25, was taken into custody and booked for felony evading. Bail was set at $75,000.

The case is being investigated by Olympic Division major assault detectives, who are seeking information about others who were involved in the street takeover. Anyone with information is urged to call (213)382-6628.

And who exactly do the hooligans expect to protect them when they’re robbed, mugged, assaulted, raped when all the cops quit because they can’t do their job, huh? Sure. let’s defund the police so people like that can do whatever they want. That sounds like a good idea.