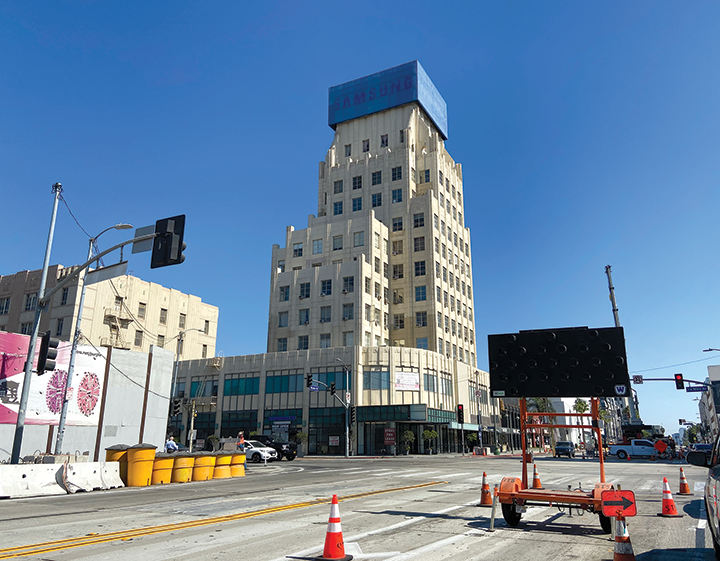 Lane reductions will be in place on Wilshire Boulevard between Detroit and June streets to facilitate construction at the Wilshire/La Brea subway station. (photo by Edwin Folven)

A partial lane closure of Constellation Boulevard east of Avenue of the Stars will also be implemented on weekdays from early January through April 4 to facilitate construction. The Century Park driveway will remain open only on weekdays and the road will be fully closed to traffic each weekend from 8 p.m. on Friday through 6 a.m. on Monday.

Preparations also continue in Century City for the launch of twin tunnel boring machines that will tunnel under Beverly Hills for approximately two years before meeting with the first section of the subway near Wilshire/La Cienega. The road closures will be in place at least through Feb. 23 while preparations continue on the tunneling machines.

In Beverly Hills, crews have reached an average of 80 feet on the way to a final depth of 100 feet at the future Wilshire/Rodeo station. Preparations have begun for station construction after excavation concludes in early 2021. New hauling hours for removing soil have been announced. From 10 a.m. to 4 p.m., two lanes will be open in each direction on Wilshire Boulevard between El Camino and Crescent Drive to accommodate soil removal from the Reeves staging yard. From 10 p.m. to 10 a.m., Wilshire Boulevard will be reduced to one lane in each direction between El Camino and Crescent drives, when excavation will occur through deck openings along Wilshire Boulevard at Canon Dive, and just west of Beverly Drive.

At Wilshire/La Cienega, station construction, material deliveries, instrumentation and concrete pouring continue. Ongoing concrete and material deliveries to the Wilshire/La Cienega station box are anticipated to continue this week. Eastbound Wilshire Boulevard may be intermittently reduced to one lane between La Cienega Boulevard and Gale Drive. Westbound Wilshire Boulevard may be reduced to two lanes between Gale and Hamilton drive. The lane reductions will generally occur two to three times per week.

Near Wilshire/Fairfax, station construction, hauling and concrete pouring are ongoing. Wilshire Boulevard will be reduced to two lanes in each direction between San Diego Way and Spaulding Avenue through next August. Intermittent lane closures may be in place to support deck panel maintenance and investigation. Anticipated work hours are 9 a.m. to 3:30 p.m., and 7 p.m. to 6 a.m., Monday through Friday.

Hauling, deliveries and tunneling support are ongoing in construction staging yards at Wilshire/La Brea, and from a K-rail enclosure at Wilshire Boulevard and Orange Drive.

Through Feb. 27, Wilshire Boulevard will be reduced to two lanes in each direction between Detroit and June streets, and Orange Drive will remain closed north of Wilshire Boulevard. Intermittent lane closures on Wilshire Boulevard and side streets between Highland Avenue and Detroit Street may be in place to support construction from 6 a.m. to 4 p.m., Monday through Friday.

A work zone on the west side of the intersection of Wilshire and Rimpau boulevards is anticipated to be in place through next May. Wilshire Boulevard has been reduced to two lanes in each direction between June Street and Muirfield Road. Concrete and material deliveries are anticipated to continue at the site.

First responders get a boost with first shots of vaccines