‘New Girl’ is better than ‘Friends’ – fight me 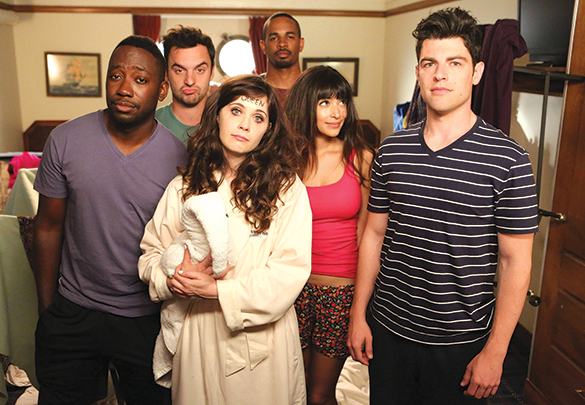 Zooey Deschanel, center, leads a stellar cast in ‘New Girl,” a series worth watching and rewatching. (photo courtesy of Fox)

How many times can you rewatch the same show? Once a year, twice maybe? And when the series finale arrives, what’s next? In my house, the answer is obvious, at least for “New Girl”: restart.

This year might feel like a terrible video game repeating the tired pattern on a Groundhog Day loop. Stay at home. Flattened curve. Stay at home. Loosened restrictions. Stay at home. Restart and restart. And the numbers of new TV options tend to come in short season orders.

But not all repetition is the absolute worst, like teaming up with my wife to defend against a barrage of attacks from pent-up kids. Rinse and repeat since March. Luckily, one series proves it remains watchable from start to finish, easily enjoyed on repeat.

The dialogue and ludicrous scenarios coalesce wonderfully, amounting to something worth revisiting immediately after finishing the first binge-through. And yes, it’s better than “Friends” – fight me.

I will die on this hill. I say this as a longtime enthusiast of zany New Yorkers for 10 seasons. But “New Girl” accomplishes more in less time. Shenanigans, check. Charming characters getting in their own way, check. A couple blooming romances, one spanning the entire series, check and check, with a payoff that doesn’t abruptly – undeservedly – top off the ending.

Jessica and her roommates in an L.A. loft exemplify just how crazy everyone can get. Jess might appear the quirkiest of the bunch, but seven seasons of splendid madness reveal the heart and joy hiding beneath layers of oddities That only works across multiple seasons and requires investment in the stories. Too often, three-camera sitcoms cater to uninitiated viewers who might only watch occasionally or jump in anew (not to mention the painful pandering jokes).

“New Girl” is for a more mature viewer (ironic, considering the characters’ immaturity) ready to embark upon both sincere and hilarious topics. I can only imagine the splendid chemistry between not only the actors but the actors and the writers’ room team as they develop outrageous sequences that take on new meaning during production.

Nick confused by Schmidt’s simple act of gifting him a cookie. Schmidt’s discussion with a gynecologist about how they effectively have sex using a very involved analogy. Winston’s inability to “do some puzzling,” he sings. It all works, with very few moments falling flat across 146 episodes.

Back to that “Friends” comparison. The Nick and Jess relationship easily surpasses Ross and Rachel (yes, easily – that’s not an exaggeration). Their ups and downs feel more authentic, the result of adulting challenges. And when they do come together and split (the usual back and forth of such shows), the emotional impact feels real, like watching close friends undone.

I also admit a degree of early disappointment when Coach (played by Damon Wayans in the pilot; he returns in the third and fourth season) exited after the pilot due to an obligation to another series. But new roommate Winston in the second episode becomes a sleeper hit, eventually.

He’s a bit straight-laced at first, but the loft wears him down. What emerges is a peculiar cat man who pranks too big or too little and rocks a flock of enviable bird shirts.

Then there’s Schmidt. Eternally in love with Cece, vain in an endearing way, wildly over the top and too into EDM. He easily steals most scenes. And Cece caps off the cast, first as Jess’ oldest friend who always attracts the guys. But that’s just the intro. She enjoys many hysterical moments, especially a truly disturbing baby voice.

Creator Elizabeth Meriwether (screenwriter of “No Strings Attached”) knows her way around an eclectic cast worth engaging over and over.

The power of “New Girl” resides somewhere between a familiar insanity and the general uncertainty 30-somethings encounter quite frequently.

Enjoy this one as many times as possible; replace it with your seasonal “Friends” marathon. It’s that good – fight me.