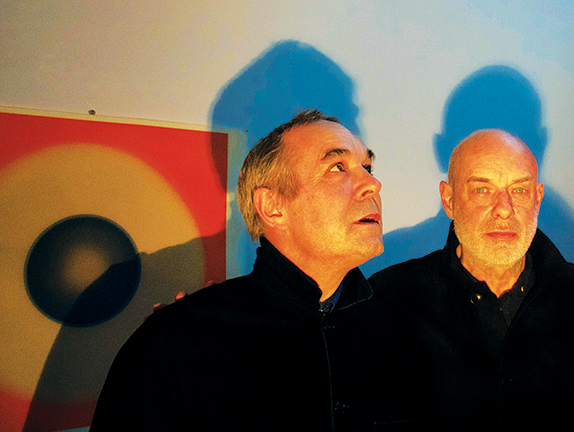 Roger Eno and Brian Eno have created an audio-visual project for The Music Center. (photo by Cecily Eno)

The Music Center will hold a new public screening and sound installation on the LED screens on its Jerry Moss Plaza in collaboration with nonprofit radio station Dublab from Jan. 22 to Feb. 21.

As part of the installation, the Music Center will screen more than 100 short film finalists and winning entries from “A Quiet Scene,” an audio-visual project by pioneering ambient music artists and brothers, Roger Eno and Brian Eno. The video project arose from a public competition by record label Deutsche Grammophon in support of the brothers’ first collaborative studio album, “Mixing Colours,” which was released this past March.

“The Music Center is thrilled to serve as the first public square where Angelenos can enjoy the screenings of the films selected for ‘A Quiet Scene’ in a safe outdoor location,” said Rachel Moore, CEO and president of the Music Center. “As stressful as this time period has been, in some ways, the pandemic has reoriented our fast-moving lives to embrace the quiet and value what’s most important to us.”

“It’s been our dream that we can share the Enos’ contemplative and meditative music in tandem with film works from around the globe in an accessible, open air and inspiring environment that offers the Los Angeles community a mental balm amongst complex times,” Dublab Project Manager Eli Welbourne said.

To develop “A Quiet Scene,” the artists invited the public from around the globe to create and submit films paired to the music featured on the 18-track album. The length of each film corresponds to the length of the track. Filmmakers were tasked with capturing a facet of their life during the early stages of the COVID-19 quarantine that showed a quiet moment at home through their windows or outdoors. There were nearly 1,800 submissions.

“One of the qualities of art is that it allows a diving board from which to jump into one’s own interior. It’s a means of communication that encourages the whispers of personal interpretation. The pleasure of looking at these films is noticing how each one draws out something different from the music it accompanies,” Roger and Brian Eno said.