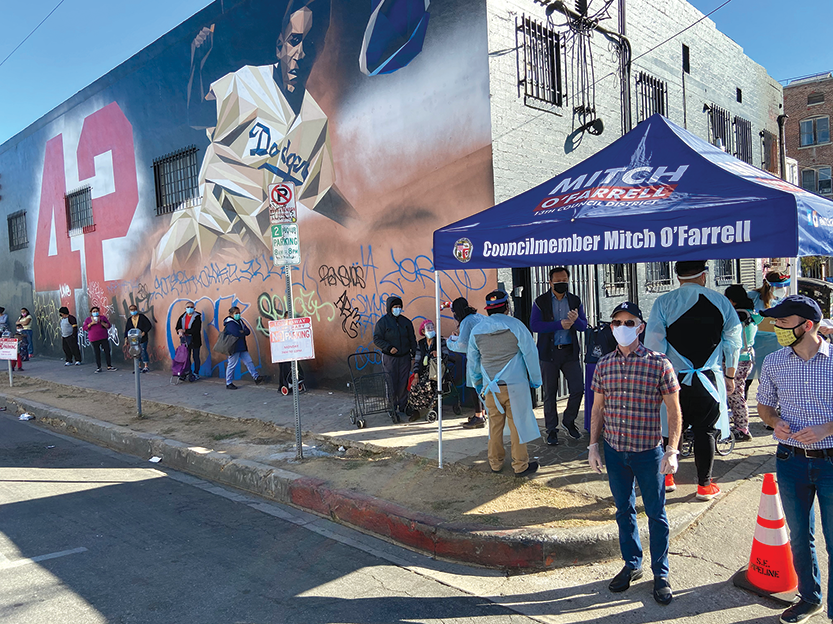 With food insecurity and hunger increasing due to the pandemic, Los Angeles City Councilman Mitch O’Farrell held a distribution on Dec. 21 to ensure families in the 13th District have food during the holidays.

Approximately 100 residents who pre-registered waited in line outside O’Farrell’s field office on Sunset Boulevard in Echo Park and were given bags of food, including eggs, fruits and vegetables, and boxed and canned products. Some families received gift cards to purchase more food from grocery stores, and gifts were provided to young children.

The food distribution was part of a larger program held monthly at the councilman’s field office in partnership with the Salvadoran American Leadership and Educational Fund and Sustainable Economic Enterprises of Los Angeles, which operates the Hollywood Farmers’ Market and other weekly neighborhood farmers’ markets. The nonprofit Salvadoran American Leadership and Educational Fund acquires the produce directly from farmers and coordinates the distribution. 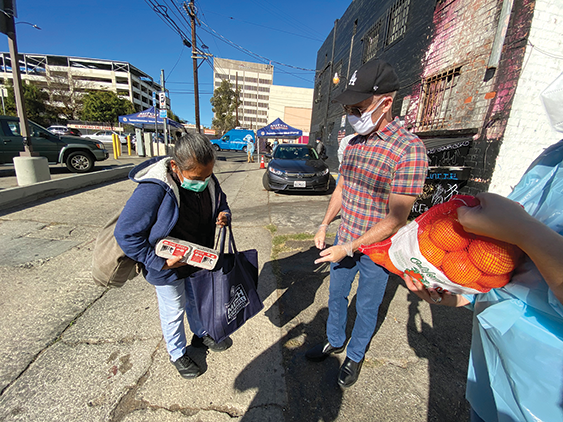 “We found our communities are highly impacted by COVID. They are mostly communities of color and immigrant communities, so we want to make sure that they are staying healthy,” said Jocelyn Duarte, executive director of the Salvadoran American Leadership and Educational Fund. “We are providing them with healthy, fresh food. It’s something that is definitely needed in the community. We are seeing at least 100 people every time.”

O’Farrell said the distribution was one of many efforts to help people during the pandemic, particularly low-income families in densely urban communities who are struggling. A separate program directs food and resources to homebound senior citizens. The goal is to ensure people have the basic necessities to survive.

“We know that there’s greater food insecurity now than there has been, perhaps since the Great Recession or perhaps even the Great Depression. We know that the communities I represent have been hard hit by the pandemic and the consequences of the pandemic as it relates to employment, as it relates to illnesses. So, we know that as never before people like me, decision makers in city government, need to focus all our energy and resources on making sure people have nutritious meals,” O’Farrell said. “We participate in holiday events every year, Thanksgiving and Christmas, Hanukkah, all the holidays and celebrations, and it’s always traditionally been about joy and giving. This year, it’s all about love. I mean it with all capital letters. You exhibit love by making sure people have the basics of what they need. Not just toys for the kids, but making sure that people have enough food on the table.”

Organizers said the distribution makes a difference in whether some of the recipients will have food during the holidays. Each person is given enough items to last several days. Many people in line on Monday were seniors and members of immigrant communities.

“[I am] very grateful for the services and for the food,” said Sandra, an elderly resident who used only her first name. “The food will help feed my family and feed others close to me. I am grateful for this help.”

O’Farrell pointed to studies that show food insecurity and hunger continue to increase, and he vowed to maintain programs that place food directly into the hands of people in need. He has committed more than $1 million in discretionary funds from his district and supported more than $103 million in City Council expenditures to help people during the pandemic.

“We are going to be hurting for a long time in this economy, which is why we’re doing this every month in all of 2021,” O’Farrell said. “We will be standing here one year from now and doing the same thing. Hopefully by then, the economy will start to recover, maybe more strongly once the vaccine reaches critical mass, but that’s why we’re in this for the long haul.”

Duarte said plans call for the regular food distributions to resume in January on the second Friday of each month at 10 a.m. at O’Farrell’s field office, 1722 Sunset Blvd. All residents of the 13th District are welcome; pre-registration is required by calling (213)246-2471, or emailing Julio Ramos at jramos@salef.org.