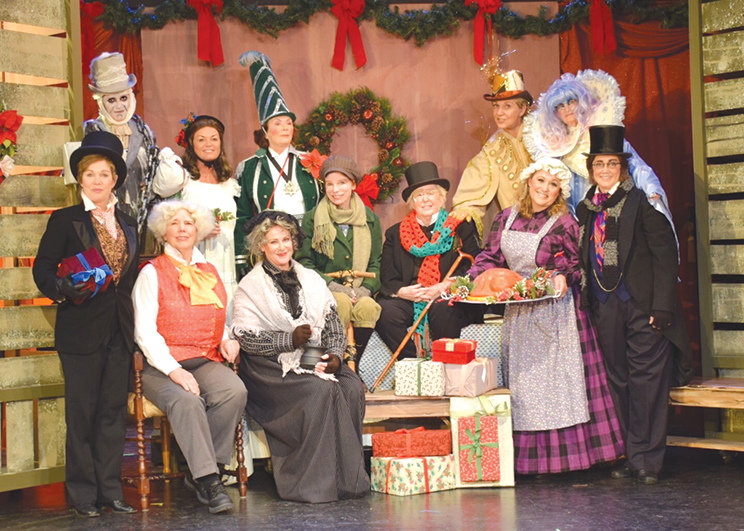 For decades, staged performances by the Assistance League of Los Angeles’ Nine O’Clock Players, the oldest children’s theater company in Southern California, were the only opportunity many local youngsters had to experience live theater. Just as cultural institutions around the globe have had to rethink how to make the arts available to diverse audiences during the COVID-19 pandemic, NOP has pivoted online to make the performing arts available to the city’s youngest residents.

“We started thinking about how [to] deliver our services and … we decided to just pivot to videos,” NOP Outreach Coordinator Jenny Brandt said. “It really appears that people are loving having a complete show for kids to watch, even if it’s less than perfect.”

For the holidays, Production Chair Kim Harrison said NOP was doing exactly what it’s done in the past, only online. Live on NOP’s YouTube channel is “Mr. Scrooge,” an hour-long musical version of a “Christmas Carol.”

To adjust to the pandemic and remote-learning directives, earlier this year NOP launched the “Magical Theatre Experience,” a streaming digital series for teachers and parents with unique video content to support learning in the performing arts.

Since 1929, NOP has been presenting free live musical theater for children. Annually, the Nine O’Clock Players performs two plays with 22 performances each at its Hollywood theater – all at no cost to the student attendees during the week and priced at $15 a seat for Sunday matinees for the general public. Approximately 12,000 children, primarily Los Angeles Unified Title 1 students, see a NOP show every year, according to Brandt.

“It’s just nice for kids to know about theater, to know what it is, because a lot of these kids, they’ve never been into a theater and they don’t understand the concept of live theater production … and I think it opens up that world for things that they can do,” Harrison said.

To adapt to the absence of in-person performances, NOP has thoughtfully produced a series of enriching videos of live performances with hosted interactive segments that engage children to think critically about what they see on stage and on screen.

“When COVID-19 closed down our production this year, we knew we had to find an alternative way to bring the magic of live theater into the homes of L.A.-area students, because for 90% of the children we serve, this is their only exposure to theater,” said Lenore Schlachtman, NOP chair.

In addition to hosted performances, NOP is continuing to release a series of original, behind-the-scenes educational modules covering disciplines of theater production, such as costumes, makeup, acting, choreography, set design, sound and lighting. The entire “Magical Theatre Experience” is offered free to teachers and parents.

Episodes like “Theatre Etiquette for Kids” and “What a Choreographer Does” are intended to be helpful and engaging. A prior NOP production of “The Velveteen Rabbit” now includes an augmented video with its lead character Bunny returning to take students on an interactive journey where they learn what happens behind the scenes.