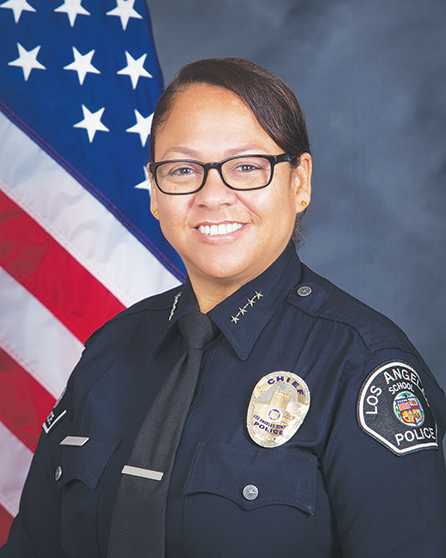 Leslie Ramirez was named Chief of School Police on Dec. 8 by the Los Angeles Unified Board of education. (photo courtesy of LAUSD)

A graduate of Alexander Hamilton High School, Ramirez started her law-enforcement career in 1991 as a campus officer. She has served LAUSD and the school police as an officer, detective, sergeant, lieutenant, adjutant and deputy chief.

“Chief Ramirez has dedicated her career to keeping all in our school community – students, staff and their families – safe,” Superintendent Austin Beutner said. “Chief Ramirez’s experiences make her uniquely qualified to lead as we continue the work to create safe and welcoming environments in all of our schools.”

Ramirez earned a bachelor’s degree in organizational management from the University of La Verne and graduated from the USC Sol Price Executive Leadership Program. She was recently appointed to the executive board of the California K-12 Police Chiefs Association.

“I am honored and privileged to have been selected as Chief of the Los Angeles School Police Department,” Ramirez said. “As a proud Los Angeles Unified graduate and first female chief, my appointment sends a powerful message to all those who aspire to lead and serve.

“In the last few months, we began the process of reviewing and evaluating our mission, operations and district objectives,” Ramirez added. “Our focus remains the safety of students, staff and the entire Los Angeles Unified community. The path ahead will bring a time of transition and change as we restructure our department. What remains unchanged is the importance of our role and our mission to maintain the safest educational environments and surroundings throughout the Los Angeles Unified School District.”

“We are glad to have Chief Ramirez at the helm as we work to reimagine the role of the School Police and ensure the safety of our students and school communities,” said Board Member Nick Melvoin, 4th District. “As a product of L.A. Unified, with more than two decades of service to this District, she brings both valuable insight and a fresh perspective to this leadership role.”