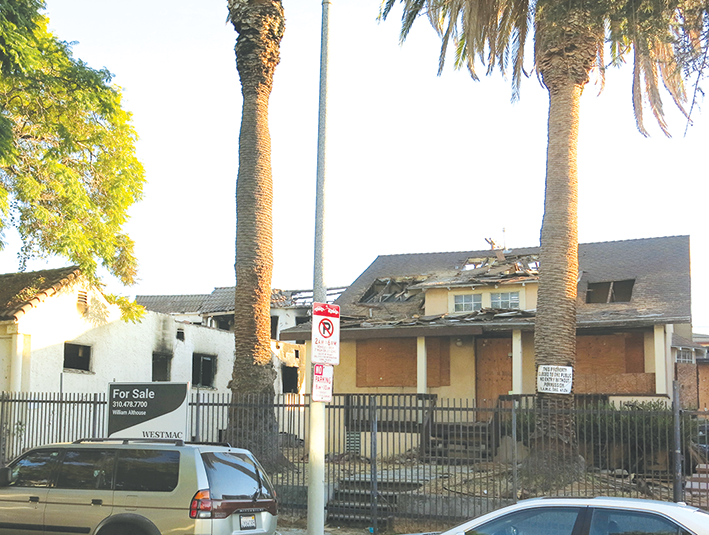 The vacant property on Barton Avenue was the site of previous fires. The latest blaze was extinguished in approximately 30 minutes and remains under investigation. (photo by Cameron Kiszla)

Two fires that erupted in separate vacant buildings in Hancock Park and Hollywood on Nov. 27 remain under investigation. The Los Angeles Fire Department is warning the public to be cautious, particularly when spending more time at home during the pandemic.

Firefighters were called to a house at 645 N. Rossmore Ave. at 11:14 a.m. and found flames in a room in the second story. The fire was extinguished in 20 minutes. The roof was damaged, but no further estimate of loss or damage was provided. Arson investigators were summoned, but the cause remains undetermined, LAFD spokesman Nicholas Prange said. 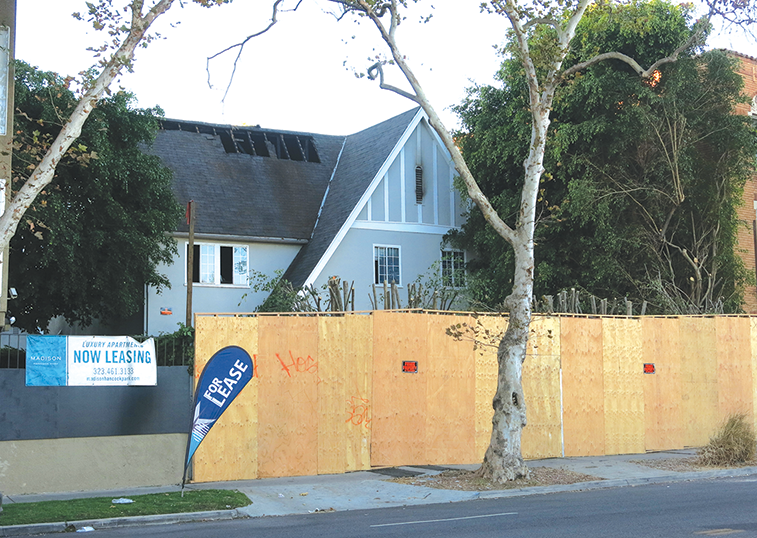 Arson investigators were called to the scene of a fire in a vacant house on Rossmore Avenue, south of Melrose Avenue. (photo by Cameron Kiszla)

At 8:52 p.m., firefighters were called to a row of vacant bungalows at 5957 W. Barton Ave., east of Vine Street and south of Santa Monica Boulevard. Flames could be seen at the rear of the bungalows and threatened an adjacent two-story apartment building, authorities said. Firefighters extinguished the blaze in 32 minutes and contained the damage to the bungalows. They remained at the scene to address any flare-ups. The cause of that fire is also undetermined, Prange said.

The LAFD is concerned about the potential for fires and deadly consequences during the holidays. Prange said Christmas trees can be hazardous if they become too dry, and space heaters present a problem when people do not follow proper operating instructions and keep them too close to combustible items. He added that this year, fires caused by candles appear to be a prevalent problem.

“People start getting into the holiday spirit and start bringing the scented candles out, and that can be an issue. We always recommend that you don’t leave an open flame unattended,” Prange said “It’s the normal stuff, don’t overload an outlet or keep Christmas trees too close to a heater or flame. We also stress cooking safety and fire safety before Thanksgiving and during the holidays to get the message out there. We want people to remain safe.”