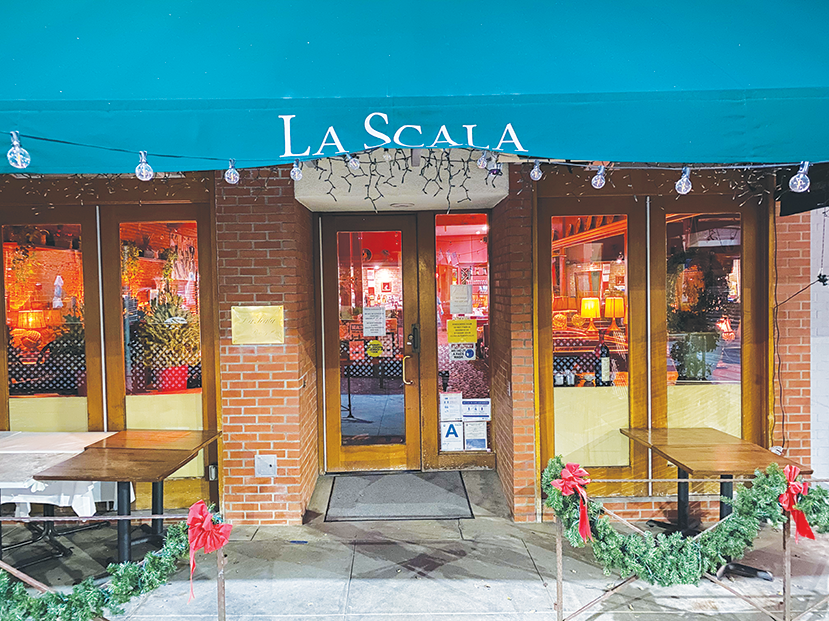 Beverly Hills restaurant La Scala was warned by the city not to hold a New Year’s Eve dinner. (photo by Marc Saleh)

On Dec. 28, the day before Gov. Gavin Newsom said he would be extending the regional stay-at-home order due to surging COVID-19 hospitalizations, La Scala issued the following statement regarding its planned New Year’s Eve party.

“This is the message the note was meant to convey: With the dining ban set to expire on Dec. 28, we are hopeful of resuming some sort of table service and we are considering taking reservations for New Year’s Eve. If this is something you would be interested in, please let us know. If allowed, and if there is enough interest, we’ll contact you to secure a reservation,” La Scala announced via Instagram.

Newsom said that afternoon he would be postponing his formal announcement until Dec. 29.

The governor had previously said the ban would not be lifted until the region’s intensive-care unit capacity at hospitals exceeded 15%. For a week now, including this past weekend, Southern California’s ICU capacity has been listed at 0%. In making his announcement, Newsom noted that during the weekend, 96% of Los Angeles County hospitals had diverted ambulances to other hospitals due to overcrowding.

According to Dr. Lee Hilborne, a UCLA Health professor of pathology and laboratory medicine and a member of Beverly Hills’ Medical Advisory Task Force, the governor’s orders are unlikely to change before late January.

“It certainly appears to me that we’re at risk for some increases with people who are doing minimal engagement over the holidays, which is sort of normal human behavior, unfortunately,” he said. “With the volume being so high, anything that could cut the transmission even minimally is good.”

However, when it comes to actual data as to how the virus is being transmitted, Hilborne said that he and others don’t “really know.”

La Scala, which has been part of the Beverly Hills landscape for over 60 years, is known for its Original Chopped Salad – the only item on its menu notated as trademarked. The printed invitations for a New Year’s Eve dinner “inside” the restaurant were placed in bags along with to-go food orders. In the Instagram post, which was subsequently put on the restaurant’s homepage, La Scala said use of the word “inside instead of outside” was meant to convey “levity.”

According to Todd Johnson, Beverly Hills Chamber of Commerce CEO and president, restaurants are suffering to the point where he expects that nationally, half of them would ultimately disappear from the landscape as a result of the pandemic and subsequent restrictions.

“Most industries have taken a hit over these last nine, 10 months,” he said, noting that Costco, Amazon and many grocery stores have done well. “But of all the other industries, I think that hospitality has taken probably the hardest hit. Most restaurants run on a shoestring [budget] anyway. If they make a nickel on a dollar, that’s a pretty good profit. Combine that now with only being able to do takeout … most restaurants aren’t making any money. If they’re breaking even, then that’s pretty amazing.”

Johnson said that while he was unaware of any local restaurants opening back up in violation of the regulations – all outdoor dining operations in L.A. County were mandated to cease on Nov. 25 at 10 p.m. – multiple Beverly Hills restaurants had reached out to him to ask about opening again, despite the current restrictions.

“I advised against that, but I can understand why they would do that,” he said. “I think some of them are like, ‘Look, we’re done at the end of this year anyway, so we’re going to get what we can. Whatever revenue is better than nothing. And that’s what we’re bringing in right now,’” he said.

“I can be completely empathetic with [La Scala] and others,” he said. “People are desperate, and truly on their last limb.”

While city officials in both Beverly Hills and West Hollywood said that there aren’t any restaurants that have continued to operate in violation of the order, across the county, a small number of restaurants continue to invite patrons to sit down, take off their masks and dine.

At Tinhorn Flats in Burbank, co-owner Lucas Lepejian, whose father founded the restaurant 18 years ago, said the restaurant racked up almost $5,000 in fines for continuing to offer outdoor dining, that is, until attorney Mark Geragos agreed to represent the restaurant and the county stopped fining them.

“We’re taking a stand because it’s completely unfair,” Lepejian said of the governor’s mandates. “We’re getting shut down with no relief pay and they just expect us to shut down our livelihood without paying us and we’re not able to operate as we wish. It’s just completely unfair. It’s tyranny occurring in our society at the moment.”

Lepejian underscored that in continuing to offer patrons the opportunity to dine outdoors, the restaurant was complying with the COVID-19 health guidelines previously put in place when outdoor dining was considered safe.

“Customers are coming in of their free will,” he said, adding that there was no proof that outdoor dining was causing people to contract the virus.

In response to Beverly Hills officials learning that La Scala was soliciting patrons to make reservations for an indoor dinner, city spokesperson Keith Sterling said that code enforcement dispatchers confirmed the conditions of the county’s health order with the restaurant.

As listed on the public health website, the county has issued hundreds of citations due to lack of compliance with the health officer order.

“We utilize education as the primary step in gaining compliance; however, when compliance is not achieved, enforcement may include issuance of a notice of violation or a citation,” the Department of Public Health wrote in a statement. “Violation of or failure to comply with the health officer order is a crime punishable by fine, imprisonment or both.”

As of press time, the New Year’s Eve dining invitation remained on La Scala’s website stating that they were considering taking reservations for New Year’s Eve.