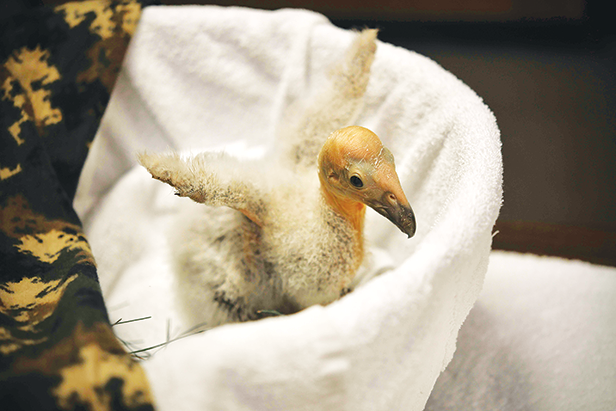 Riding the wave of excitement generated by its recent California condor hatching – which was shared with the world through dramatic photos and video on social media – the Los Angeles Zoo launched a crowd-sourced naming campaign to raise critical funds for the California Condor Recovery Program, which has helped to reestablish a sustainable population of California condors in the wild.

With the recent arrival of its baby chick, currently known as LA1720, the California condor’s population continues to thrive through the zoo’s tireless conservation efforts, but funds are needed to carry on this valuable work. Donors can support the zoo’s efforts by participating in its first-ever condor naming campaign.

Funds raised will help support the program, which includes breeding condors, preparing condors for release into the wild, providing medical treatment for sick and injured birds, performing monitoring and interventions in the field, and training and mentoring staff from partner agencies and institutions.

A donation of any amount enables people to select from four names: Cali, Wallace, Timoloqin and Yurok.

The names were selected by the members of the zoo’s California condor keeper team.

“‘Timoloqin’ means ‘to tell a story’ in the Chumash language, and it is perfect because so many people were drawn in by LA1720’s story and learned about condors and the program,” said Debbie Sears, who has been working with California condors for 24 years.

The campaign will continue through Jan. 7. Each donor will be recognized on the L.A. Zoo’s website with additional benefits to those who meet donor levels. All net proceeds benefit the CCRP and are tax deductible.