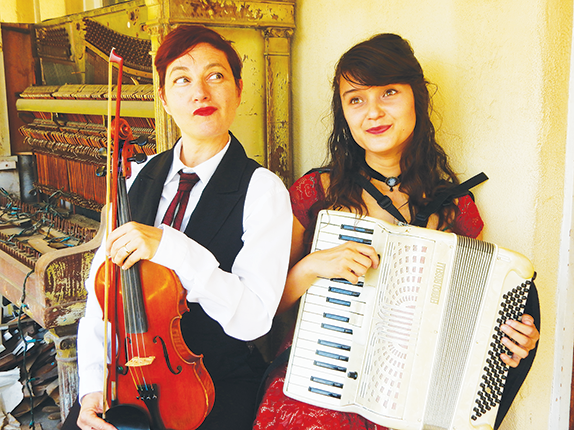 Violinist Janice Mautner Markham and accordionist Melinda Wes will perform in a virtual concert on Dec. 8. (photo courtesy of the Holocaust Museum LA)

The Holocaust Museum LA will present “Klezmer, Culture and Art: Inspired by David Labkovski and Sholem Aleichem,” a virtual concert by Zingarella, the acclaimed duo of violinist Janice Mautner Markham and accordionist Melinda West, on Tuesday, Dec. 8, at 11 a.m. The concert, which will also include special guests from the Jewish Youth Orchestra, is inspired by the museum’s virtual exhibit, “Recalling a Lost World: David Labkovski Brings the Stories of Sholem Aleichem to Life.”

Zingarella performs a contemporary mix of traditional Klezmer, “American Songbook” standards and Latin tango with a twist of old-school jazz. The duo has performed at the Broad Stage and the Skirball Cultural Center.

Markham, who also plays violin in the Klezmer Gypsy rock band Mostly Kosher, is director of the Jewish Youth Orchestra and the JAC Trio string ensemble. She is artistic director of the arts nonprofit Vox Box Arts Collective. West, an accordionist/pianist and the singing frontwoman of the stompfolk band Sugar Rum Tantrum, has performed at both Disney World and the Hollywood Bowl.

A donation of $10 is suggested. For more information and to register, visit holocaustmuseumla.org/event-details/klezmer-culture-and-art-virtual-concert-inspired-by-david-labkovski-and-sholem-aleichem.

‘New Girl’ is better than ‘Friends’ – fight me