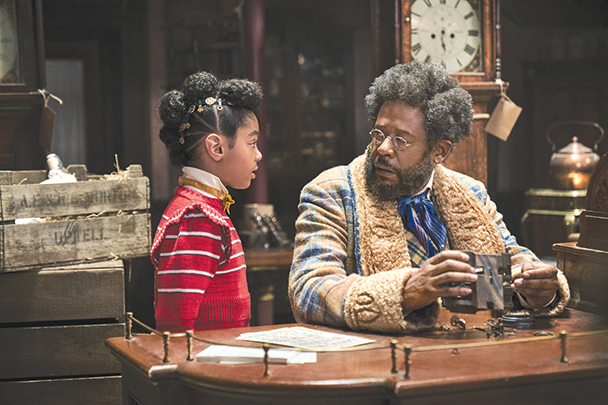 A pandemic can’t touch Netflix’s holiday fetish, hocking nearly 20 new films, limited series, themed episodes or specials. That’s too much schmaltz for any one person to consume, even for research purposes. And the results, unsurprisingly, are mixed.

Things traverse painful lows in the M-rated “Holidate,” with Emma Roberts’ Sloane agreeing to (I really don’t want to say this) “holidate” a platonic friend on Christmas, Valentine’s Day and the rest to fend off pestering relatives regarding nuptials, babies, that whole life thing, etc.

When the pair (no spoiler here) inevitably click (just in time for a certain festive season), the filmmakers miss a golden opportunity.

“I thought I wanted a holidate,” Sloane tells Jackson (Luke Bracey). “But the truth is, I just want you.”

This non-“Operation Dumbo Drop” feature depicts a real tradition so abysmally that the Military Times deemed it “a film that sets its sights high but ultimately crashes and burns,” Sarah Sicard writes. She’s right. I’d watch “The Christmas Prince: The Royal Baby” three times to avoid this again.

And Vanessa Hudgens, surviving an Instagram scandal earlier this year, embarks on her third annual holiday film. Clearly, she wants that Hallmark opening left vacant by Lori Loughlin, though I must question her continued involvement in the “Princess Switch” flicks, which force the “High School Musical” alum to play multiple roles (three this time), each more mediocre than the last. Leave that trope to the great Mr. Murphy. 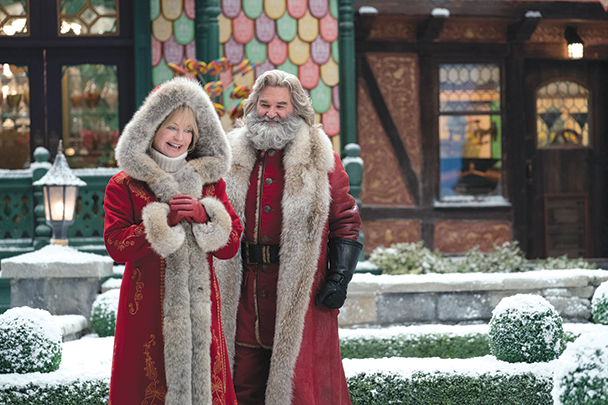 Goldie Hawn and Kurt Russell come together again in “The Christmas Chronicles 2.” (photo courtesy of Netflix)

Perhaps the most disappointing outcome belongs to “The Christmas Chronicles 2,” written and directed by Chris Columbus (“Goonies” scribe, two-time “Harry Potter” director), who produced the first installment. His love for troublesome little critters goes overboard with Santa’s (still Kurt Russell) elvish helpers running amuck. Think “Despicable Me” favoring minions too much; it doesn’t work. And finally, Mrs. Claus (Goldie Hawn) receives more than a cameo, only to hang out with an injured reindeer. Odd choice.

The rest of the holiday according to Netflix feels like a haze of glitter, bad Christmas puns and way too much sugar, thanks to baking challenges and even a stop-motion Christmas special, “Alien Xmas,” featuring a little green dude disrupting the North Pole’s operations for 42 minutes. Alas, I must admit I ran out of time for “Christmas Crossfire,” a German action-comedy that looks like a bloody Yuletide romp. Some eggnog and bourbon might pair nicely with that one.

Amidst Netflix’s exhausting playlist of holiday content, only one entry has any chance of surviving 2020: “Jingle Jangle: A Christmas Journey.” Imagine setting a story in Oz’s Emerald City, complete with steampunk accents and catchy musical numbers.

Years ago, Jeronicus Jangle (Forest Whitaker when the character ages) ran an enviable toy shop only rivaled by the Weasley twins’ Wizard Wheezes, located at 93 Diagon Alley. But when his former assistant Gustafson (Keegan-Michael Key as the older one too) steals his notes and a prize toy – a walking, talking, sentient figurine named Don Juan Diego (voiced by Ricky Martin) – Jeronicus’ world crumbles.

Now an old man, defeated and alone, he must develop a new toy before bankers reclaim his shop. Meanwhile, Gustafson exhausts his plagiarized ideas and hopes his old boss has one last golden egg. Amidst this, granddaughter Journey (breakout star Madalen Mills) arrives to meet Jeronicus for the first time. Unbeknownst to the estranged former patriarch, this young girl has the same unique gift for invention he once did.

“Jingle Jangle” is a peculiar combination of polished visual effects and practical sets more appropriate for Broadway, sporting some impressive tunes and marvelous choreography along the way.

The “Wicked” vibes are truly strong with this one, which greatly help soften the blow of the more cheesy, sentimental moments.

The plotline might provide a degree of heart to the story, but “Jingle Jangle” excels in its many memorable songs, both catchy and visually enticing. Thank writer-director David E. Talbert (Netflix’s “El Camino Christmas,” “Almost Christmas”), who developed the concept over 20 years, for bringing everything to life, but don’t forget to give a special shout-out to John Legend, Michael Diskint, Philip Lawrence and Davy Nathan for writing those songs.

I suppose Netflix deserves a little gratitude this December, contributing one instant classic amongst 18 other forgettable entries.