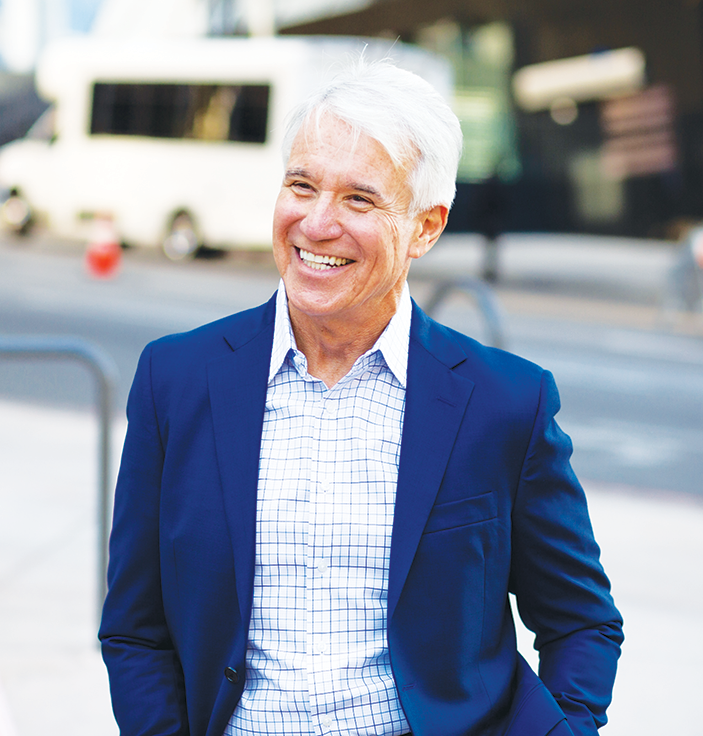 On Monday, Dec. 7, George Gascón will be sworn in as the new Los Angeles County district attorney. Over 2 million L.A. County residents voted for Gascón to lead the nation’s largest prosecutorial office, unseating incumbent Jackie Lacey, who had sought a third term.

“We are at a historic moment where our communities are realizing that we have to pivot away from the old ways of doing business,” Gascón said. “We have now seen years of a system that has not necessarily created any more safety, but certainly has destroyed many communities, both socially and economically.”

As the COVID-19 pandemic continues to surge, Gascón, who emigrated with his family from Cuba to East L.A. at the age of 13, predicted that people and institutions would face myriad challenges.

The key, he said, would be for organizations to work together to equitably distribute resources. Gascón said he expected that money from Measure J, which 57% of L.A. County voters passed on Nov. 3, would help fund diversion and reentry programs, as well as fund additional mental health services.

“We’re going to have to be very thoughtful about the way we use the resources that we have across the board to make sure that we’re keeping our community safe and that we’re doing the best things that we can. And that’s going to require a multidisciplinary approach,” he said.

At the core of Gascón’s plan to reform the criminal justice system is his commitment to reduce incarceration levels. Even brief incarceration periods, he said, can ruin lives, with lost housing and employment opportunities perpetuating a cycle of criminal behavior.

In anticipation of assuming a role where he will oversee nearly 1,200 prosecutors who annually file more than 100,000 cases combined, Gascón created a dozen initial committees to focus on a variety of issues including immigration, resentencing and law enforcement accountability and relations.

Gascón said his office also planned to reopen investigations into at least four fatal officer-involved-shootings that Lacey declined to charge, including the killing of a mentally ill unarmed homeless man near the Venice boardwalk by LAPD in 2015.

Gascón, who in 2011 was named the San Francisco district attorney, becoming the nation’s first police chief to become a D.A., said he planned to keep track of officers whose testimony could not be counted upon.

“The district attorney has a role to ensure that the people that are coming in, that are providing testimony … are doing so in a manner that is truthful and unbiased,” he said. “I think what starts to happen when people understand that they’re going to be held accountable to that standard of truthfulness is that you start modifying behavior for most people.”

There was a time in Gascón’s life as a teenager when becoming a cop was the last thing on his mind, he said. After dropping out of high school, he eventually enlisted in the U.S. Army en route to unexpectedly forging a career in criminal justice.

“My path was very unconventional, both in policing and in prosecution,” said Gascón, who received his bachelor’s degree from California State University, Long Beach and his law degree from Western State University. “It was not a childhood dream that I would want to be a police officer and police the neighborhood that I grew up in. When we saw a police car, we ran the other way.”

Gascón underscored the importance of curtailing the incarceration of both minors and those with mental illness as two keys to lowering incarceration rates and recidivism.

“When it comes to juvenile defendants, the first thing that we have to do is not prosecute them as adults,” he said. “Criminalizing youth is almost a guarantee in creating a life of crime for people because you’re foreclosing their opportunity for employment, for education and all those other things that are likely to reduce the likelihood that you’re going to be continuing to be engaging in crime.”

With respect to mental health and substance abuse, Gascón said that alternative sentencing measures were more apt to fix the problem than incarceration.

“Clearly, if a person is dangerous, that may be the only option that you have at the moment, but there are often many other options, and we’re not using them appropriately,” he said. “When it comes to mental health, it really becomes working with other partners.”

Gascón said an effective post-incarceration rehabilitation process is also critical, particularly given that approximately half of all inmates released have some mental trauma that needs to be treated to diminish the likelihood of other problems.

“You have to be sure that they’re given an opportunity for success,” he said. “It’s bringing people out, but bringing people out in the right way when they are good to come out. Meaning there’s going to be a place for them to stay; there’s going to be the right level of support, training, employment, all those other things that are likely to remove someone from the likelihood of reoffending.”

In an effort to lower recidivism rates on a generational level by taking people out of a system that creates a criminal record, Gascón said prosecutors would prioritize children.

“We know if we prioritize the right level of intervention using restorative justice, we are likely to stop them from engaging in criminal behavior as adults,” he said. “That’s a really important intervention process because that really talks about what you are likely to see in the next 10 or 20 or 30 years.”

In addition to using restorative justice as a means to achieving the right level of intervention, Gascón said his team will also bring more science, data and technology to their work in dealing with environmental justice and public corruption.

Gascón said his team would individually evaluate which crimes to prosecute as a result of this summer’s civil unrest, which resulted in significant destruction of property as well as violent crime.

“I think it’s a case-by-case basis. First of all, we have to look at the severity of the crime. When you’re dealing with violent crime, it’s always going to be looked at much more harshly than when we’re talking about crime where no one was physically hurt. We have to evaluate,” he said.