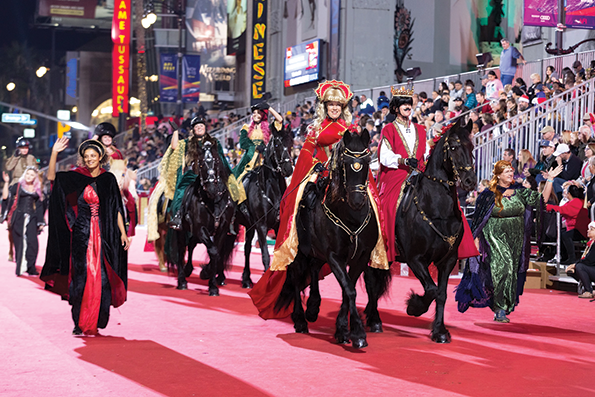 “This year, it wasn’t able to happen because of what’s going on with COVID, but this is a way of still celebrating the holiday season, just in a different way and a safe way,” said Steve Moyer, a publicist representing the parade.

The program will cover some of the best moments of the past 10 years, and many familiar faces will still be seen, including hosts Laura McKenzie and Erik Estrada, who will be joined by Montel Williams, Dean Cain and Elizabeth Stanton.

“Right now, more than ever, people need some relief from all the stress this pandemic has created in everyone’s daily lives. Our presentation of ‘The Hollywood Christmas Parade Greatest Moments’ will bring Americans two hours of family holiday joy when it’s needed most,” McKenzie said in a statement.

“In these trying times, we need to remember to keep living. That’s why we are presenting the greatest moments of Hollywood Christmas Parades from the last decade for the enjoyment of Americans around the country, while at the same time supporting Marine Toys for Tots, whose mission is to collect new, unwrapped toys to distribute to less-fortunate children at Christmas,” Estrada added in a statement. “I hope you’ll take some time to enjoy the program. Stay safe, stay healthy, stay hopeful, and may you and your loved ones have a wonderful and blessed holiday season.”

The program will also feature appearances from celebrities like Dr. Oz, Olivia Newton-John, and Penn and Teller.

“Those people have been past grand marshals of the parade. They’ll be saying something … original to the parade for this year. Plus, there will be montages of past parades’ grand marshals and animated characters, that’s something new and special in this parade that hasn’t been there in the past,” Moyer said.

Moyer said the Hollywood Christmas Parade’s tradition of supporting Marine Toys for Tots is important, and this year is no different.

“It is a mission of the parade to bring awareness of what Marine Toys for Tots does, because they are helping children who otherwise might not have a holiday gift on Christmas and those less fortunate. It’s a really great thing to do,” Moyer said.

Williams will interview retired Lt. Gen. James B. Laster, the president and CEO of Toys for Tots.

Beyond the philanthropic aims, Moyer said, the program also offers a family-friendly way for loved ones to spend time together during what has been a difficult year for many people. Other highlights include musical performances by the Village People, Bret Michaels and Kenny Loggins; colorful performers, floats and marching bands; famous cars from movies and television shows from Star Car Central; and a finale featuring Santa Claus, who will be accompanied by Marine Corps escorts.

“It’s a fun, fun show for people to watch and especially during these times, when people need to smile and do something with the family, this is great family entertainment [to] sit around the television and watch this show,” Moyer said.

The Hollywood Christmas Parade Greatest Moments” airs on Friday, Dec. 4, from 8 to 10 p.m. on the CW network, KTLA Channel 5. For information, visit thehollywoodchristmasparade.org.