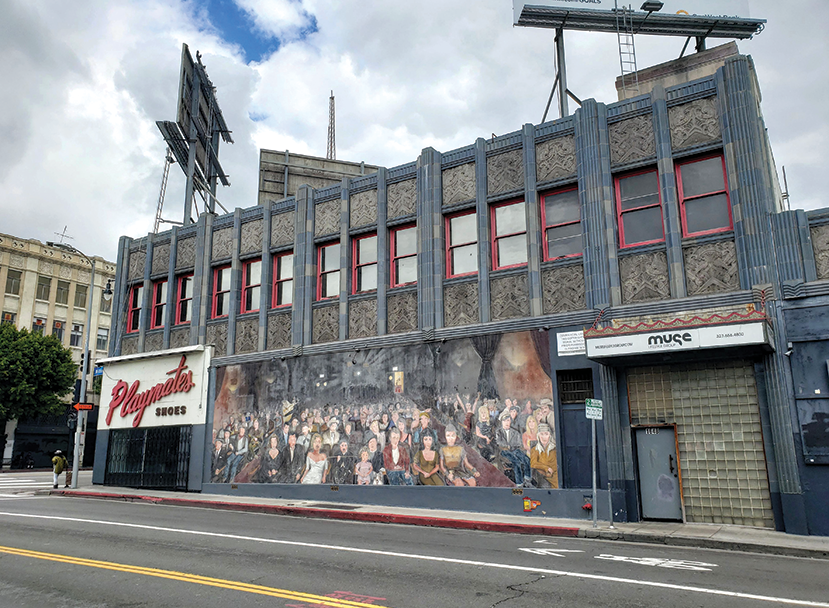 The “You Are the Star” mural will be preserved as part of the Hollywood and Wilcox project.)

The intersection of Hollywood Boulevard and Wilcox Avenue will soon be enhanced after the mixed-use Hollywood and Wilcox project was unanimously approved by the Los Angeles City Council on Dec. 8.

The project from developer LeFrak aims to rehabilitate the 89-year-old Attie Building, home to the “You Are the Star” mural featured in the film “La La Land,” and construct a 15-story building behind the Attie Building, along Wilcox Avenue.

David Twerdun, managing director of LeFrak, said they were “definitely thrilled” to get the city’s approval and plan to continue using the 9,000-square-foot Attie Building for commercial uses, as it was used in the past.

Twerdun added that LeFrak hopes to bring a “higher-quality tenant” to that stretch of Hollywood Boulevard.

“We’d like something that will cater to the community, as well as tourists. It’s possible that it could be food and beverage or some other clothing retailer or something like that. Obviously, we’ll have to be mindful of the changing dynamics of retail with online shopping, but there are several different good options for it that would cater to both tourists and local residents,” he said.

The new, 160-foot-tall building’s exterior has changed since the project was first proposed – “We tried to be mindful of that and respectful of [comments from the public and the city],” Twerdun said – but many of the amenities, including nearly 34,000 square feet of open space, rooftop terraces, a pool deck and 420 parking spaces, will remain for the residents of 260 housing units. In March, Twerdun said LeFrak planned to set aside 10% of the 260 units for affordable housing; now, however, 21 units – 8% – will be affordable housing, though a financial contribution will be used to create more affordable housing elsewhere. 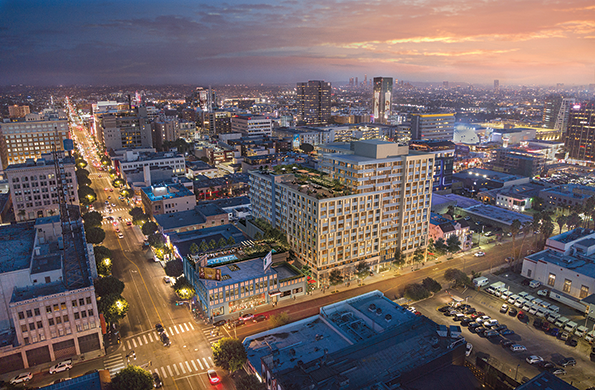 The Hollywood and Wilcox project will create 260 new housing units in Hollywood, including 21 affordable units in the building and funding for affordable housing elsewhere. (rendering courtesy of LeFrak)

The affordable housing changes were worked out with the office of Councilman Mitch O’Farrell, 13th District, who suggested changing the proposed allotment. Instead of 10% for workforce housing – households making up to 150% of area median income – the project will include 13 units for low-income households, eight units for moderate-income households and a contribution of $1.664 million to the Council District 13 Affordable Housing Trust Fund.

“[This payment] will allow funds to be allocated to develop additional housing units at affordability levels below workforce housing or to extend covenants of existing affordable housing. This proposal better meets the housing needs of the city,” said Craig Bullock, O’Farrell’s planning director, in a letter to the council’s Planning and Land Use Management Committee.

Twerdun said the changes were made to reflect how “the needs of the community changed over time.”

“We recognize that there is a great need for affordable housing in the community … This was a deal that worked for both the project and the City Council office,” Twerdun said.

With the changes in place, O’Farrell lent his support to the project.

“The project will bring much needed housing, especially affordable housing, to the city of Los Angeles,” Bullock said.

Construction will likely not begin for at least a year, Twerdun said, as LeFrak still needs to have its construction plans approved by the city. Those plans will be revised over 2021, with a “target to start construction in 2022,” he said.

“We’re very grateful for the support that we received from the community, both professional organizations and groups within the community such as the [Hollywood Chamber of Commerce], business leaders in the community and residents as well,” Twerdun said.

Hanukkah in a pandemic