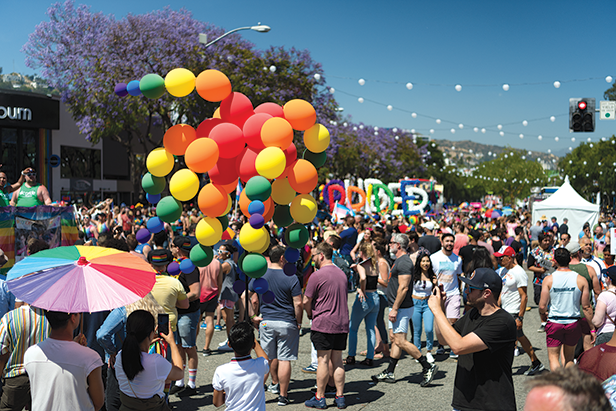 The West Hollywood business community will spearhead discussions of what the future of Pride in the city will look like after Christopher Street West announced its departure. (photo by Jon Viscott/courtesy of the city of West Hollywood)

Though Christopher Street West, the nonprofit that produces LA Pride, announced plans earlier this year to leave West Hollywood, the city plans to continue to host celebrations of its own. After a unanimous Dec. 7 vote, the responsibility of imagining a new Pride celebration in West Hollywood will fall to the city’s business community.

City staff had proposed a $216,000 contract with MIG Inc. for “community visioning,” but four local business leaders who spoke during public comment argued against awarding the contract to MIG, which has offices primarily in California – including Pasadena and Los Angeles – but also in Colorado, Oregon, Washington and Texas.

“We implore you to not spend this outrageous amount on an outside firm when we know this event intimately and believe the community knows what it wants, and we just need to figure out how to get there and make it happen,” said Genevieve Morrill, president and CEO of the West Hollywood Chamber of Commerce.

Larry Block, who owns the boutique Block Party WeHo on Santa Monica Boulevard and was a candidate for City Council in the Nov. 3 election, also pointed out that due to the pandemic, the next couple of years of Pride will require flexibility of the city in order to adjust to changing conditions and regulations.

“Today, if we make a commitment, we’re stuck, and we need to be really limber,” Block said.

The council members agreed to let the West Hollywood Chamber of Commerce, city staff, the city’s boards and commissions, and residents come together to develop a plan for Pride in 2022. City Manager Paul Arevalo said the city does not “anticipate anything happening in 2021” except for “organic” celebrations that will be held safely. Funding for Pride in 2022 will be included in next year’s budget discussions by the City Council, Arevelo added.

“That’s hopefully when we’ll be back to normal,” Arevalo said.

“In understanding the large amount of money that this was and the conversations we’ve had tonight, it’s great to see our local community stepping up in that way,” Councilman John Erickson said.

Several council members made special requests for inclusion in the process. Councilman John D’Amico requested that Jeff Consoletti of JJLA, who helped CSW in organizing LA Pride in West Hollywood and who spoke during the public comment portion of the meeting, be included to offer his expertise.

“Jeff is such a resource, all of us I think agree, and 2021, whatever that looks like, I think he needs to be involved because he would understand probably better than anyone how to rally a behind-the-scenes solution to a public-facing event,” D’Amico said.

“I want to make sure that the business community comes together and they include the Transgender Advisory Board and LGAB and have some kind of interaction with them to help form these plans for 2021,” Shyne said.

Erickson, a former city staffer, asked that city staff be included in the process, and he also asked that CSW be consulted, despite the organization’s announced departure.

“I do think that CSW has been a valuable partner to our city, and understanding the ways in which JJLA and CSW have been there, one of my suggestions to staff was to talk to CSW about that history, about how Pride is produced … Involving them in the conversation as well – healing old rifts, whatever we need to call it – [may help ensure] that Pride is going to stay in West Hollywood, will come back to West Hollywood,” Erickson said.

“What we last heard from CSW is that they were not interested in being part of the city’s activities and they were going elsewhere, and that’s why we’re having this conversation tonight,” Horvath said.